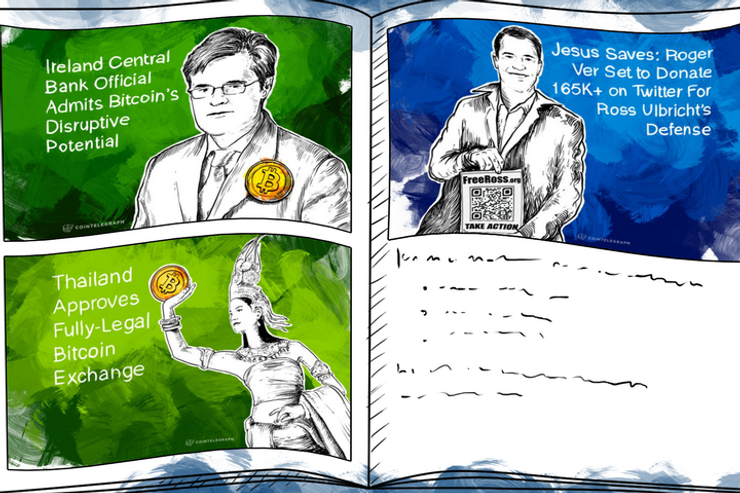 Bogdan Ulm reported last Sunday that on comments made by an official from Ireland’s central bank regarding Bitcoin’s disruptive potential.

“Central banks, [out] of necessity, have monopolized the exercise of these functions,” Gareth Murphy said at BitFin 2014 in Dublin. “Virtual currencies pose new challenges to central banks’ control over these important functions.”

“The Bitcoin community in Thalland is thriving with four unregistered exchanges and now two fully legal exchanges. The first legal exchange in Thailand was opened by Bitcoin Company Limited.”

Last Saturday, Roger Ver announced he would match retweets with a $10 donation to the Free Ross fund. By Monday, he had more than 16,600 retweets.

“At the time of writing, there are 16,678 retweets, meaning $US166,780 (or about 262 BTC) has been pledged to the Free Ross Ulbricht campaign if you trust Ver to follow through (and there is no reason to think Bitcoin Jesus wouldn’t follow through).”

“Born from a need to secure Bitcoins in the safest way possible, Copay adheres to the idea that multi-signature technology will have an extremely important role in aiding people keep their Bitcoin secure from theft or loss. The creators of the multi-signature wallet believe that it's vital for wallet technology to be peer reviewed and open-source.”

Sabina Laska reported Wednesday that an Israeli-Vietnamese startup is testing Hanoi’s cool stance on digital currencies by launching an exchange.

“The exchange, VBTC, was founded this spring and launched beta testing last month, but only became available for live public trading from Wednesday. As of Wednesday afternoon, the exchange had already logged 10 trades by four active traders.”

This has been a steady week for bitcoin trading. The week opened with a BTCUSD exchange rate of about $634 and dropped slightly midweek to a low of $620. By the weekend, the price was almost back to where it started, at $633.

Trade volume remained consistently low all week, never even breaching the US$5 million mark for a day’s worth of trades.