Do major crypto exchanges act in their best interest rather than respecting community-based project guidelines?

The billion-dollar cryptocurrency space is no stranger to hype, as it is considered a factor that increases crypto prices. While this may be, hype generated from major centralized crypto exchanges may actually be creating more harm than good for users involved with certain community-based projects.

For example, Web3 Foundation’s flagship project Polkadot aims to enable a decentralized web where users, rather than internet monopolies, are in control of applications, services and institutions. The project was started in 2017 by some leading names in the blockchain industry, including Ethereum co-founder Gavin Wood.

The redenomination is a tactic similar to a stock split in traditional equity markets. In this case, all DOT tokens exchanged for 100 new DOT tokens would be at a ratio of 1:100. According to Gavin’s post, the move “would result in a much more ergonomic DOT value.”

While the redenomination of the DOT token was clearly explained, some leading centralized exchanges like Binance and Kraken listed Polkadot’s DOT token on Aug. 18, three days before the agreed-upon redenomination.

Binance has not returned a request for statement from Cointelegraph, while Kraken denied to comment on the situation.

Confusion puts the community at risk

Shortly after Binance and Kraken listed the DOT token, Wood fired out a series of tweets expressing his concern for the community as a result of the impulsive actions taken by the two exchanges.

As forewarned, some unscrupulous exchanges listed 𝘕𝘦𝘸 𝘋𝘖𝘛 today rather than Friday - the Denomination Day agreed upon by the @Polkadot community.

While we can't control these CEXs, we can urge them to stop.

Their actions are putting our community at risk.

As Wood noted, the actions taken by the exchanges have put the community at risk. While confusion among traders, speculators and community members has become apparent on CryptoTwitter. A post on the online image-sharing platform Imgur shows how the DOT price immediately shot up 10 times more than its determined value during the first trading hour. 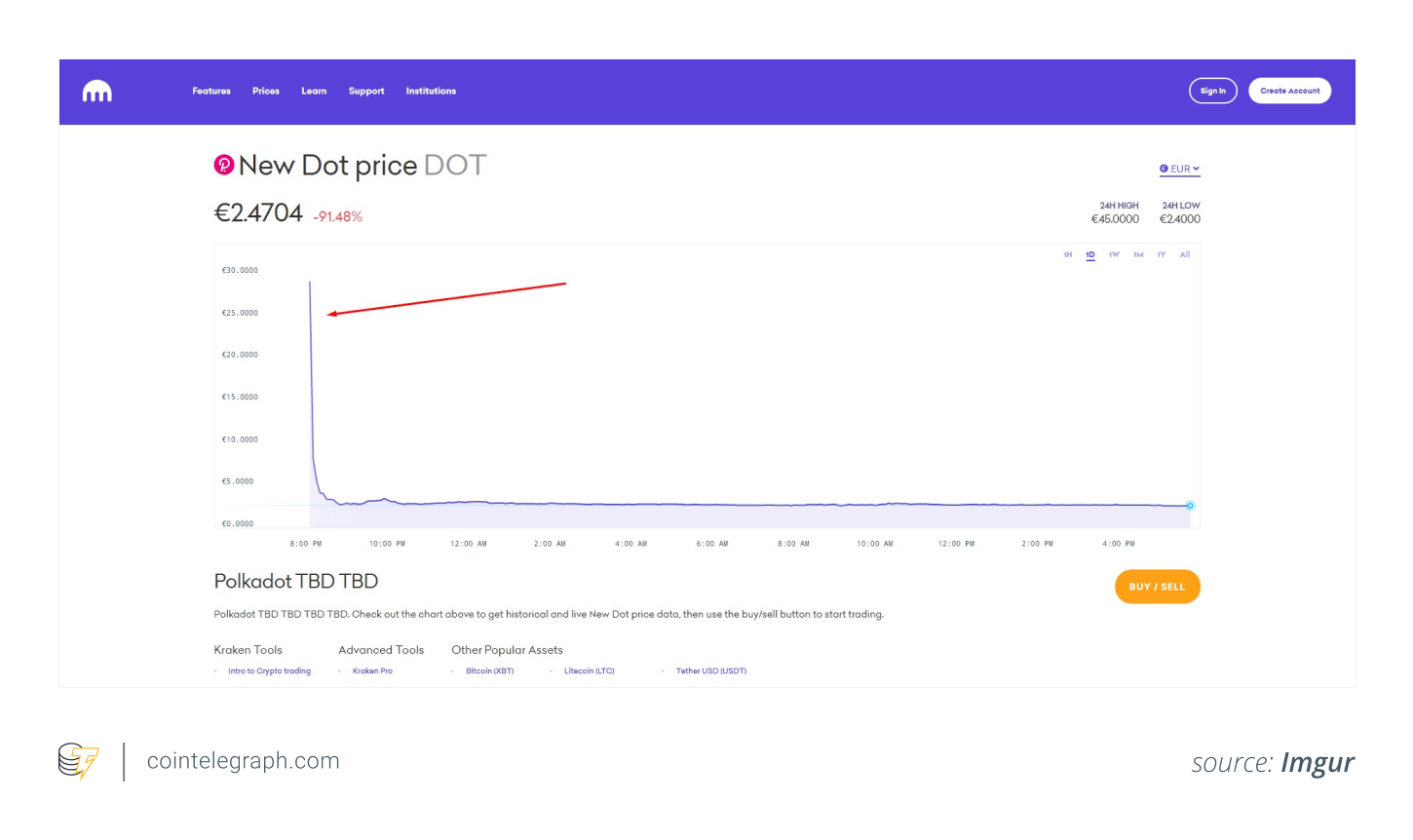 Yet, because of the DOT redenomination period, uniformed community members who thought they were buying the DOT tokens at a very low rate were actually buying them at a much higher price. This will become evident on Aug. 21, Polkadot’s denomination day.

In the meantime, the Polkadot community has taken several actions to warn users against buying the DOT tokens currently listed on Binance and Kraken. For example, the Web3 Foundation sent an email to Polkadot members on Aug. 18 explaining the DOT denomination and how the redenomination will take place. The email also states:

“Unfortunately, some unscrupulous exchanges chose to enact the redenomination on August 18 rather than August 21, the Denomination Day that was agreed upon by the Polkadot community.”

The email further notes that the actions taken by Binance and Kraken were “irresponsible” and “deceptive,” and that they had not only put Polkadot stakeholders at risk but exposed themselves to liability.

While Kraken chose not to discuss the issue directly with Cointelegraph, Jesse Powell, co-founder and CEO of Kraken, sent out a tweet on Aug. 18 sharing his thoughts on the matter: 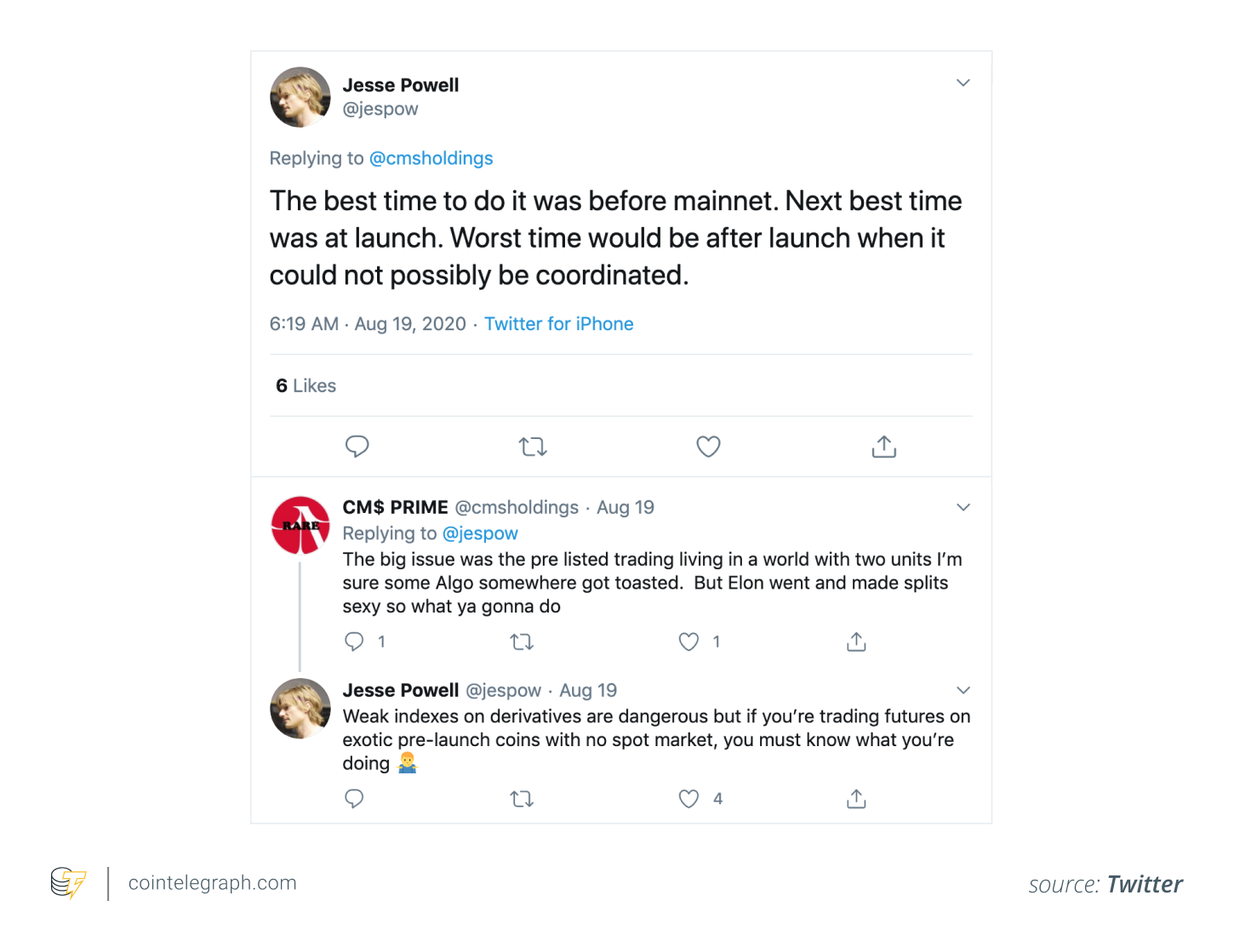 Not the first time

Regardless of the situation between the Polkadot community and the two exchanges, according to some commentators, this situation illustrates an even larger point: Major crypto exchanges may be toxic for community-based projects.

Mati Greenspan, a crypto market analyst and founder of market analysis platform Quantum Economics, told Cointelegraph that he isn’t surprised by the actions taken by Kraken and Binance. “Exchanges and brokers are businesses at the end of the day and they’re compelled to do whatever is most profitable. This isn’t a uniquely crypto problem either,” he said. Greenspan elaborated that if the decentralized web is going to move forward, it must proceed without the use of centralized exchanges.

In a recent interview, Daniel Wang, CEO and founder of the Loopring decentralized exchange and protocol, made a similar remark: “Risks include listing some bad tokens and bad trading behaviors like pump and dumps. So this kind of behavior cannot be solved by any technical solution. It’s a human behavior. And the other one includes market and information manipulation.”

Unfortunately, as Polkadot mentioned in its recent email to community members, there is little that a community-based project can do to counter what was done by the exchanges. “However, since Polkadot is now decentralized and permissionless, we can do little against a determined third party,” the email stated.

Moreover, Galia Benartzi, co-founder of Bancor, a decentralized crypto exchange, told Cointelegraph that it’s difficult to build a new economic paradigm without a bridge from the existing one. However, Benartzi mentioned that while centralized exchanges and marketplaces may be the norm now, it’s unlikely the crypto space will continue to operate this way:

“Currently, centralized exchanges are still a fundamental piece of the digital asset puzzle, while new technologies and mindsets take root, build momentum, face challenges and iterate. But certainly the arch of technology shows us that gatekeeper rents can be effectively decentralized, or at least more widely distributed.”