0xBitcoin, the neutral PoW token on the Ethereum network

Few know, but there is more than one way to create ERC-20 tokens. ERC-20 tokens can be created on the Ethereum network by pressing a couple of keys on the keyboard, but they can also be mined, like Bitcoin (BTC). This became possible in 2018 when EIP-918 (Ethereum Improvement Proposal) was approved by the Ethereum Foundation.

With the approval of this proposal, tokens can now be created that have all the best qualities of Bitcoin with the speed, scalability and functionality of the Ethereum Network. Mining solves many of the problems plaguing Ethereum and ERC-20 tokens: unfair distribution, initial coin offerings (ICOs), pre-mines, airdrops, the list goes on. But, when the token is distributed through proof-of-work mining, all these problems go away. There is no single control center, no centralized development team and no single point of failure. Everything is controlled by a smart contract running independently on the Ethereum network. 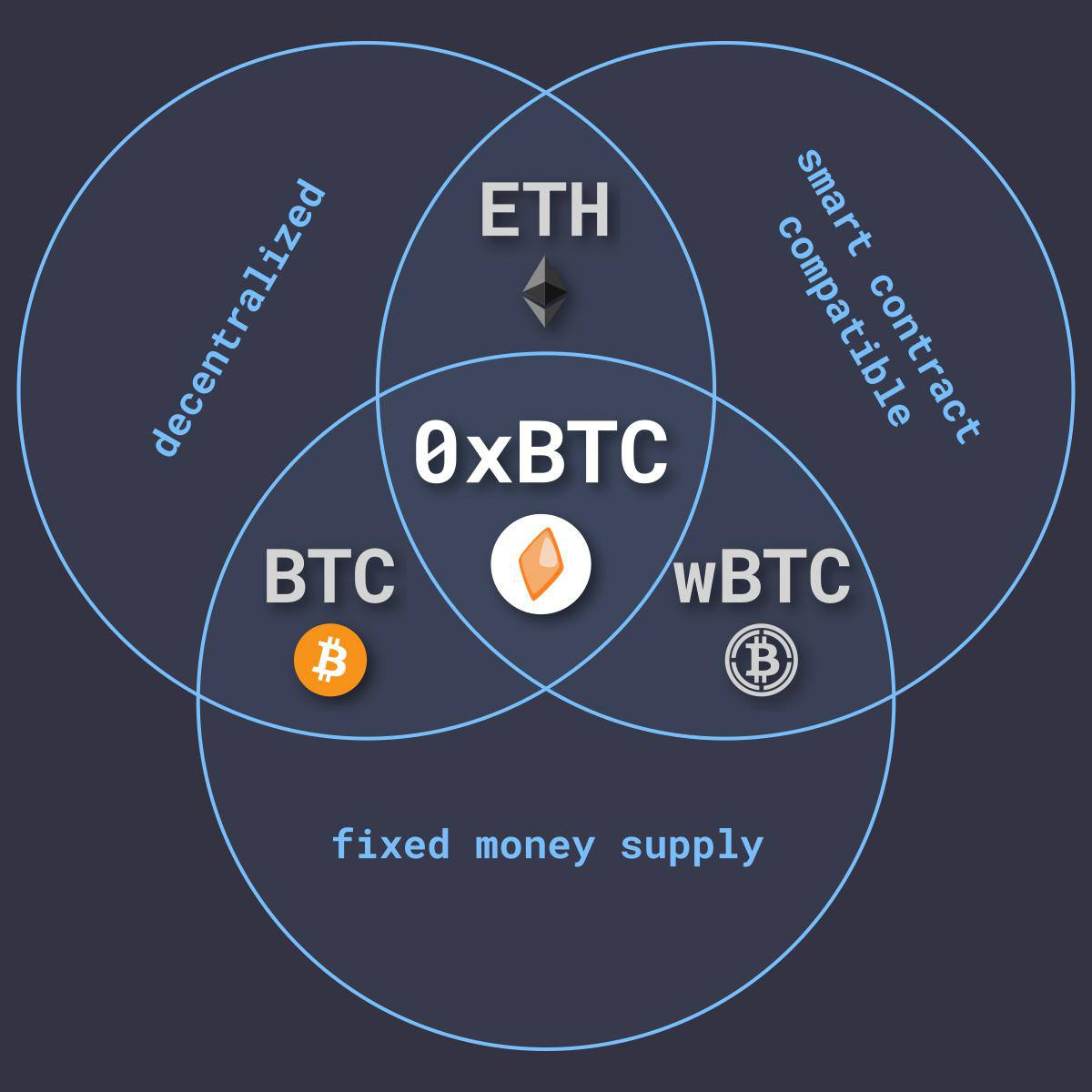 But why do we need another Bitcoin clone, you ask?

0xBitcoin doesn’t just clone the technology and create a new blockchain with a different name, like nameless Bitcoin clones, it clones the implementation and principles of the original and merges them with Ethereum. Like Bitcoin, 0xBitcoin can serve as a store of value, but since this is the implementation of the Bitcoin principles in the format of the ERC-20 token, it has all the advantages afforded to Ethereum tokens, and can be used natively and trustless in the decentralized finance (DeFi) segment as a native, neutral and trustless currency. Using 0xBitcoin makes the entire Ethereum ecosystem more decentralized and secure.

What risks are currently present in DeFi, and how can 0xBitcoin solve them?

The problems plaguing DeFi today are centralization and dependence on the actions of third parties. Let's list some of them:

WBTC is widely used in many protocols. The private keys that govern the entire Wrapped Bitcoin (WBTC) smart contract are in the hands of only a select few people. If they are hacked, phished, or are otherwise attacked — which is not so rare — the hacker, having obtained these keys, will be able to instantly make themselves an unlimited amount of WBTC and steal all Ether (ETH) and tokens from all liquidity pools. At the same time, the price of WBTC itself will crash to almost 0, which will cause a further cascade of liquidations in the protocols where it was used as collateral.

DAI, the “decentralized stable coin,” is not as decentralized as it seems. 51% of the assets which secure and back MakerDAO (DAI) are centralized trustful assets - USD Coin (USDC) and WBTC.

This is another real problem. Much of DeFi relies on DAI and is therefore indirectly at the mercy of the "central banks" that control those trustful assets: Coinbase (USDC) and BitGo (WBTC). Regulators have made it clear that they can and will shut off oxygen for stablecoins, which is another attack vector for the entire sector.

What would be the ideal trustless collateral asset for this task?

No central authority, team, or application should be behind such assets as they can and have been known to fail.

Since 0xBitcoin distribution exists in the form of mining, it does not require any trusted third parties. It is completely neutral and has no dependencies. It does not rely on any central banks. In addition to this, 0xBitcoin inherits all of Ethereum’s security, making it as secure and resistant to 51% attacks as the network itself.

Regulatory risk. Government watchdogs can treat any token that is backed by a centralized team or stakeholders as a security, with all the ensuing consequences. In this regard, it is useful to have and rely on a neutral, trustless and completely decentralized currency within the network, and the only ERC-20 that has 100% immunity from regulatory risk is 0xBitcoin, as it is completely decentralized and immutable. Using it in DeFi protocols reduces the overall risk and increases the reliability of those protocols.

What else is 0xBitocoin useful for the Ethereum ecosystem?

Due to the imminent transition of Ethereum from proof-of-work to proof-of-stake, a large number of miners will be forced to look outside of the Ethereum ecosystem to keep their rigs running. Many wish to continue supporting and developing the Ethereum ecosystem, not competing platforms. Mining 0xBitcoin, a neutral store of value native to Ethereum, seems like a great choice.

If the future of decentralized finance belongs to the Ethereum ecosystem, then 0xBitcoin has a great future. Having all the attributes of the original Bitcoin and all the functionality of ERC-20 tokens increases the reliability and decentralization of the entire environment. 0xBitcoin takes the best of both worlds: the trustlessness, decentralization, immutability and neutrality of Bitcoin and functionality of the Ethereum network.

We are at the very beginning of the journey, see the 0xbtc website or join the community on Twitter or Discord to learn more and let's build the project together.