The crypto market has seen an important improvement in the last week, with prices on the rise and Bitcoin (BTC) now trading around $48,000 while Ether (ETH) ventures to hold above $3,400.

Experts say that maybe Bitcoin’s price would be $45,000, then expected to move toward a resistance cluster at $54,000. Alongside this expectation, most of the big coins have moved, including ETH and Solana (SOL).

Data from TradingView shows that the price of Bitcoin has been hovering around $48,000 since it broke out above $45,000 early on March 28. 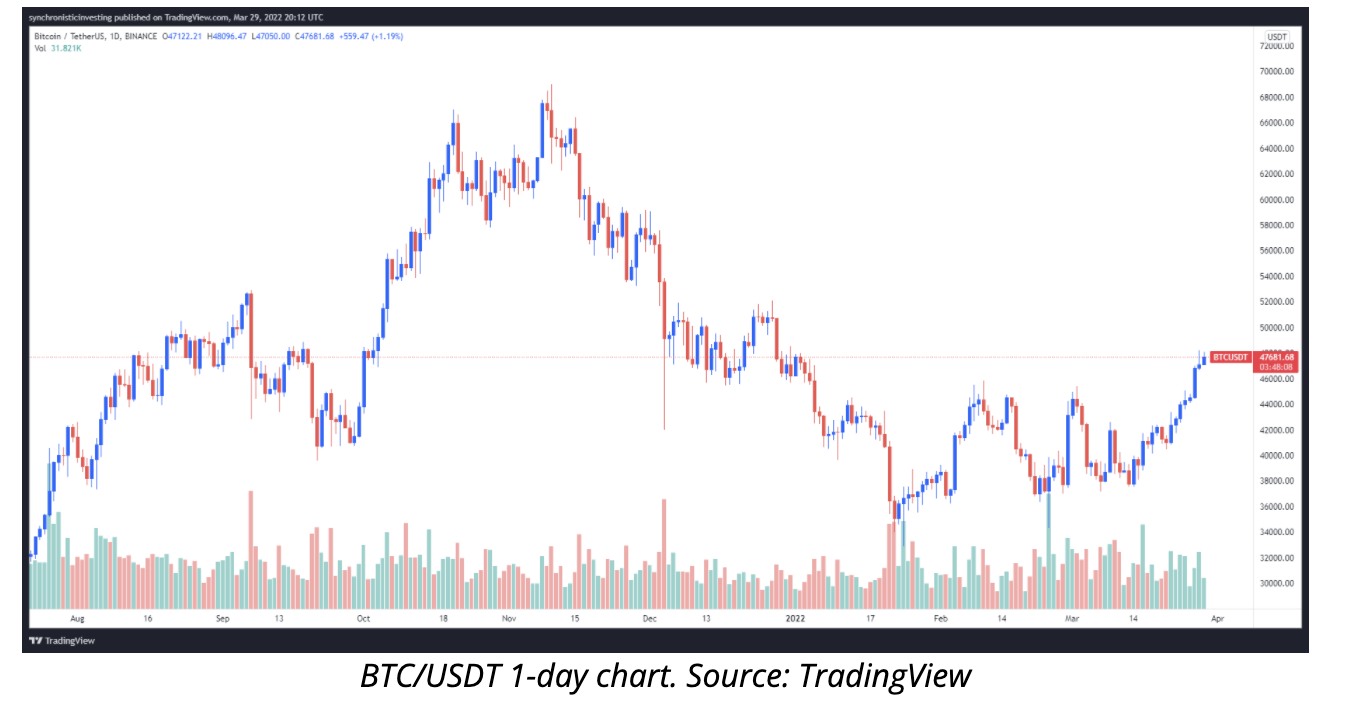 “Historically, this is an important level for Bitcoin, signaling the start of a bullish trend,” said Swift.

If it stays in this region for a while, other coins will benefit greatly from this situation. Both solid altcoins and presale tokens may create a second Shiba Inu (SHIB) effect in this period. Besides ETH and SOL, one of the best ways to make some serious investments in the space is searching the presales. Filecoin (FIL) had one of the most successful crypto presales, raising more than $250 million. SeeSaw Protocol (SSW) is currently in stage two of its presale and looks set to outperform many of the established names in the game.

Ether is the second biggest crypto in terms of market cap and the main rival to Bitcoin, outperforming its rival in many different areas, including transaction speeds.

The Ethereum network is extensively used for decentralized apps (DApps) such as smart contracts, which allow two parties to perform legal transactions without the involvement of a third party such as a lawyer.

Furthermore, Ethereum is home to a variety of initiatives focused on decentralized finance (DeFi) and nonfungible assets (NFTs).

Ethereum is transitioning from a proof-of-work (PoW) protocol to a proof-of-stake (PoS) protocol. In PoW, powerful computers must solve complicated riddles to verify transactions. In a PoS system, on the other hand, validators validate transactions in exchange for incentives in the form of a proportion of their bitcoin holdings.

Bitcoin is still a PoW cryptocurrency, which means mining it takes a long time and a lot of energy. When Ethereum fully switches to a PoS system, it will use approximately 99% less energy, be substantially faster and significantly cheaper, allowing it to scale and potentially exceed Bitcoin. Many analysts predict that ETH will be worth five figures sooner rather than later.

Last year, the price of SOL surged by more than 11,000%, establishing it as a key player in the cryptocurrency industry. The number-one advantage of Solana is its speed. Bitcoin can process around seven transactions per second, whilst Ethereum can manage slightly more. Solana, on the other hand, is capable of handling up to 50,000 transactions every second.

Similar to Ethereum, Solana is built to support DApps and currently hosts a variety of initiatives such as DeFi, GameFi and NFTs. Many developers flocked to Solana as a result of its quick speed. While ETH 2.0 continues to be delayed, there are many saying that SOL could reach $1,000 in 2022.

SeeSaw Protocol (SSW) provides several services to users who need to manage crypto assets on the most popular blockchains and peer-to-peer exchanging services in a decentralized and open way. It has been rising for more than a month now with no signs of stopping.

The clear winner in the next stage of cryptocurrency evolution is SeeSaw Protocol. The platform will offer an NFT marketplace as well as act as a multibridge DeFi. Users will be able to bridge between three of the major crypto networks — Ethereum, Binance and Polygon — to find the best available rates and speeds for their respective transactions.

SeeSaw sees the coming future and is creating a metaverse for immersive learning where children can live in an interesting virtual world, and learning is the natural outcome of enjoying the metaverse.

The project is currently in its second presale stage. The token’s value has a good chance to increase since it operates on a fee-sharing reward system, making it a solid investment opportunity that shouldn’t be overlooked.

It is built on a smart platform offering several enticing incentives to encourage users to use SeeSaw Protocol.

As of this writing, the overall cryptocurrency market cap stands at $2.26 trillion, and Bitcoin’s dominance rate is 42.2%.