Bitcoin SV (BSV), a version of an early Bitcoin fork called Bitcoin Cash (BCH), suffered a massive 51% attack on Tuesday that was still underway as of 7:30 am UTC on Wednesday, according to experts.

While many crypto exchanges were not prepared for the attack, Huobi detected the risk more than a month ago thanks to its advanced risk control systems. As a result, Huobi took preemptive measures to guard its users’ assets and remained the only exchange unaffected by the attack.

A 51% attack is an invasion on a blockchain — most commonly Bitcoin (BTC) — by malicious miners who take more than 50% of the network’s mining hash rate or computing power. It enables the attackers to prevent new transactions from gaining confirmations, thereby granting them the power to stop payments between users or double-spend coins.

Wu Blockchain, the Twitter account of Chinese journalist Colin Wu, posted on July 9 that Huobi had suspended its withdrawal business for BSV. To provide additional details regarding its decision, Huobi responded that its risk control department discovered that BSV’s current mainnet computing power was unstable and suspected that someone was preparing for the next double-spend attack. As a result, the platform suspended all deposits and withdrawals for the currency. 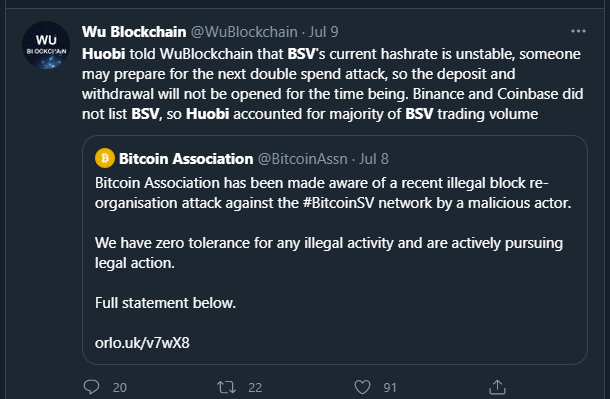 At around 11:45 pm (UTC+8) on Aug. 3, the BSV network suffered a malicious 51% attack as predicted, resulting in three versions of the Bitcoin SV blockchain being mined simultaneously and the reorganization of 14 blocks. The attack caused chaos in mining pools and the blocks were generated on three forks at the same time. Huobi remained the only exchange unaffected by the attack.

How did Huobi detect the incident in advance?

Huobi was the first exchange trading platform to discover the potential of a BSV-related risk and took control measures a month earlier than any other platform, including Coinbase, thanks to its top risk control team and capabilities. During its eight years of operation, Huobi is the only exchange that has operated safely without any security incidents for nearly a decade.

“On July 1, we were concerned about the abnormality of BSV’s mainnet and suspected that someone was preparing for an attack, so we suspended the deposit and withdrawal of BSV. We predicted this through our risk control model, which has been perfected over time thanks to the accumulation of risk control experience we’ve gained over the past 8 years,” stated Ciara Sun, vice president of global markets at Huobi.

This incident was not the first time that a 51% attack had been anticipated by Huobi’s risk systems. In December 2020, the public chain Aeternity, known as the European Ethereum, suffered a 51% attack and lost more than 39 million tokens valued at over $5 million. Numerous first-tier exchanges were victims and suffered great losses as a result. As in the BSV case, Huobi was the first exchange to discover these anomalies and put risk mitigants in place before the attack.

While unfortunate, the 51% attack is a reminder of the importance of having proper risk measures in place. Moving forward, Huobi will use and continue to improve its advanced risk control systems to ensure the utmost safety of its users’ assets.