Founder and host Adam Levy commences season one of his newest podcast featuring 11 episodes from the top minds and early adopters of social tokens, nonfungible tokens and decentralized autonomous organizations.

Los Angeles, California, July 8, 2021 — Adam Levy announces today the release of Mint, a new audio and video series exploring how the creators of today are building the communities of tomorrow using Web 3.0 primitives such as social tokens, nonfungible tokens and decentralized autonomous organizations, to name a few. Enjoy all 11 episodes in season one now for free by visiting its website.

Today’s premiere of season one includes 11 exclusive episodes consisting of one-on-one interviews from top Web 3.0 creators, investors and founders, all collectively tinkering with cryptography to help make their creator economy a reality. The podcast answers the most frequent questions creators and communities have when tinkering with Web 3.0 technology, and is available to enjoy across all video and audio streaming platforms.

“I’m so excited to be releasing over 15 hours of Web 3.0-inspired content from some of the top minds in the space,” said Levy, the founder and host of Mint, adding, ”Mint serves as the ultimate guide for future creators and communities who are looking for ways to infuse the power of crypto into their ecosystems.”

Having recently managed operations for the blockchain fund Draper Goren Holm, Levy has helped incubate and accelerate over 15 leading crypto and blockchain startups such as LunarCRUSH, Totle, PrimeDAO and CasperLabs, to name a few, while producing mass community events such as LA Blockchain Summit, and Blockchain and Booze. Now, he’s helping onboard creators and their communities to Web 3.0 by sharing their stories through Mint.

From modern fan clubs where people own the artist to multi-million dollar communities surfacing overnight, this season welcomes the best stories emerging out of Web 3.0. Hear from 11 untold journeys by notable creators, Web 3.0 founders and thought leaders who are tinkering with social money to make their creator economy a reality. 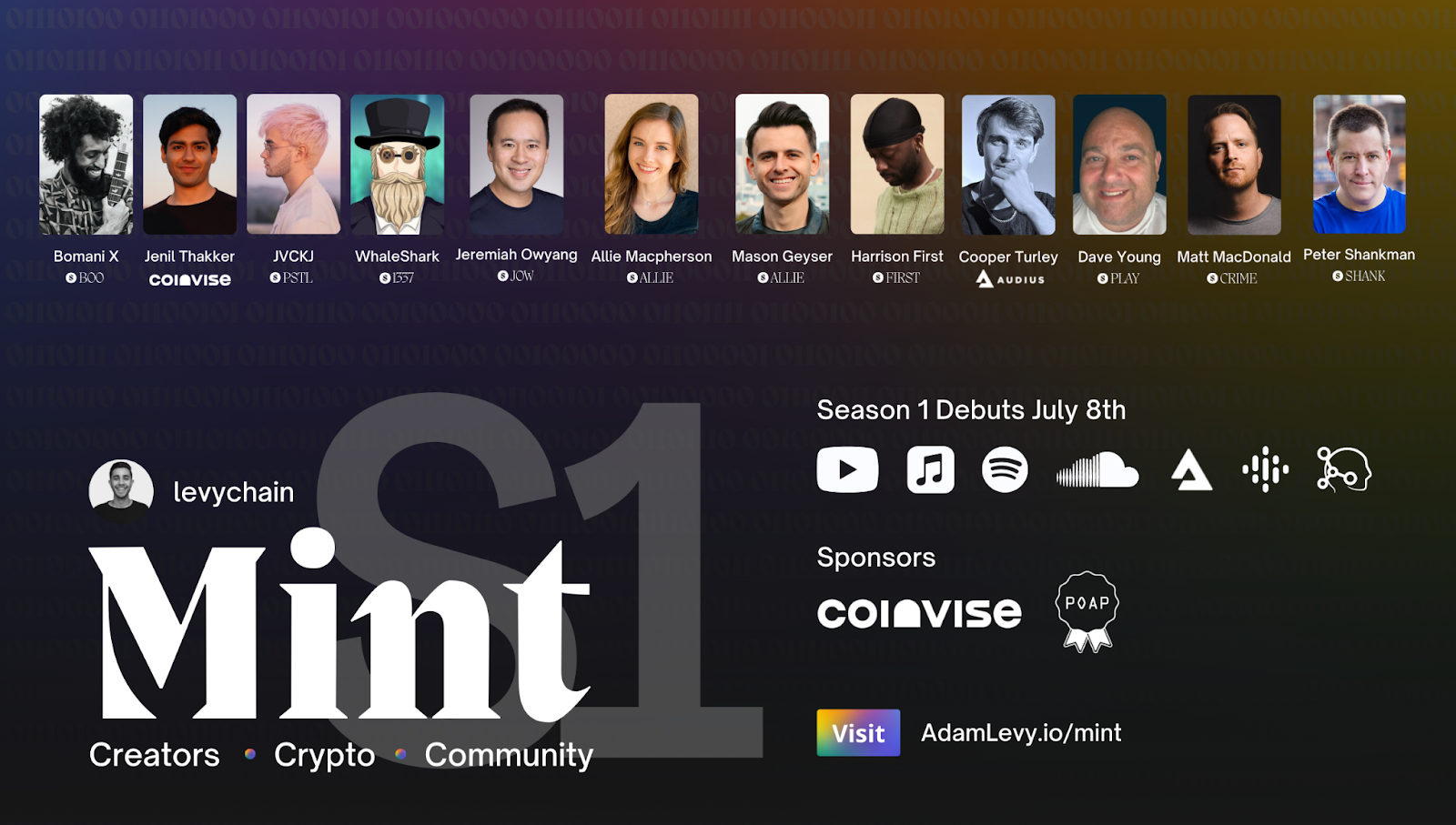 The inaugural season’s guests include:

Season one, episode one

“Allie” — Allie Macpherson and Mason Geyser: A popular gaming duo who is making headwinds across YouTube and Twitch, where Macpherson primarily streams card games such as Hearthstone and Magic: The Gathering Arena. Geyser is the back-end developer behind the Allie coin and helps manage the day-to-day business or Geyser’s brand and all that the community entails.

“PSTL” — JVCKJ: Jack Johnson, whose artist name is JVCKJ, is widely known as one half of the multi-platinum pop duo Jack & Jack. He’s a creative force who earned over a billion streams, multi-platinum records and countless sold-out tours.

Jenil Thakker of Coinvise: An entrepreneur and hacker, he’s building a decentralized social network on Ethereum through Coinvise and empowering creators with tools to build their creator economy.

“Boo” — Bomani X: As a Black guitarist, singer-songwriter and celebrity digital strategist who has worked with Jill Scott, Nicki Minaj, Lil Wayne, Wyclef and more, he’s also the founder of Lit.Spins and was selected as Clubhouses’ icon for the longest time.

“1337” — WhaleShark: A social entrepreneur and investor with a focus on disrupting the status quo, whose work is known for the wildly successful WHALE community, and now E1337.

“JOW” — Jeremiah Owyang: As an advisor to Rally.io and an active angel investor, Jeremiah Owyang is well-recognized by both the tech industry and the media for his grounded approach to deriving insights through rigorous research.

“First” — Harrison First: An American songwriter and producer, he works producing for other artists as well as his own solo works, with his own independent label JNRY FIRST. He is one of Ängie's best friends and a frequent collaborator.

Cooper Turley of Audius: He’s actively shaping the creator economy through projects such as Audius, Friends with Benefits and PleasrDAO. He advises Variant as an operator and investor and works with teams on token launches and governance through Fire Eyes DAO.

“Crime” — Matt MacDonald: He’s the lead vocalist and guitarist for The Classic Crime, a rock band formed in Seattle, Washington in 2004. After leaving a record label in 2011, The Classic Crime pioneered the use of crowdfunding and other middle-men bypassing tools, continuing to make music, content and community experiences for supporters a decade later.

“Shank” — Peter Shankman: Peter Shankman is an American entrepreneur who’s best known for founding Haro, an online service for journalists to gather feedback from the public. His fight for creating more positive awareness around ADHD has led him down the rabbit hole of monetizing his community via the SHANK coin.

“Play” — Dave Young: Dave Young is a serial entrepreneur and an indie game developer with over 15 years of experience. Using game tech combined with complex full-stack back ends, Young has founded and created teams to build complex products such as ScreenBlazer, Magnus Rush and Announcr.

The sponsors of season one include Coinvise and POAP (also known as Proof of Attendance Protocol), who are supporting Mint by collecting the show’s first one-of-one non-transferable NFT fractionalized into thirds and distributed accordingly. The NFT grants each sponsor a shared vote into proposals, ideas and future updates being implemented into Mint’s ecosystem.

Jenil Thakker, CEO and founder of Coinvise, added, “We’re a social network where you can discover tokenized creators and communities, earn social tokens for contributing to them and build your own open economy on Ethereum and Polygon, so when we heard about Mint, it was a no brainer collaboration as our values aligned.”

“At POAP, we’re thrilled to be sponsoring the first season of what’s going to become the referential show for the creator economy,” said Patricio Worthalter, the founder of POAP, adding, “After three years of running an NFT decentralized application, it feels great to finally see the ecosystem moving forward to global-scale adoption.”

Watch all 11 episodes in season one now for free by visiting its website here.

Mint is a new audio and video series by Adam Levy, which explores how the creators of today are building the communities of tomorrow using Web 3.0 primitives such as social tokens, NFTs and DAOs, to name a few. Each month, a new season rolls out with 10 to 15 untold journeys from notable creators, Web 3.0 founders and thought leaders who are tinkering with social money to make their creator economy a reality.