Singapore, Jan. 28, 2022 — SunSwap, the largest decentralized exchange (DEX) on the Tron network, is now officially integrated with Sun.io after a period of stable operation. The mining pool community has also completed its decentralization, and governance mining is open for applications on Sun.io’s website to welcome more projects for its native token, SUN.

Created by Sun.io after acquiring JustSwap for rebranding, SunSwap is the largest DEX on the Tron network. It became Tron’s leapfrog innovation in the decentralized finance (DeFi) space by integrating the advantages of both the-now-defunct JustSwap and Sun.io, featuring Tron-based and on-chain token swapping, liquidity mining, stablecoin swapping and staking, and platform governance. 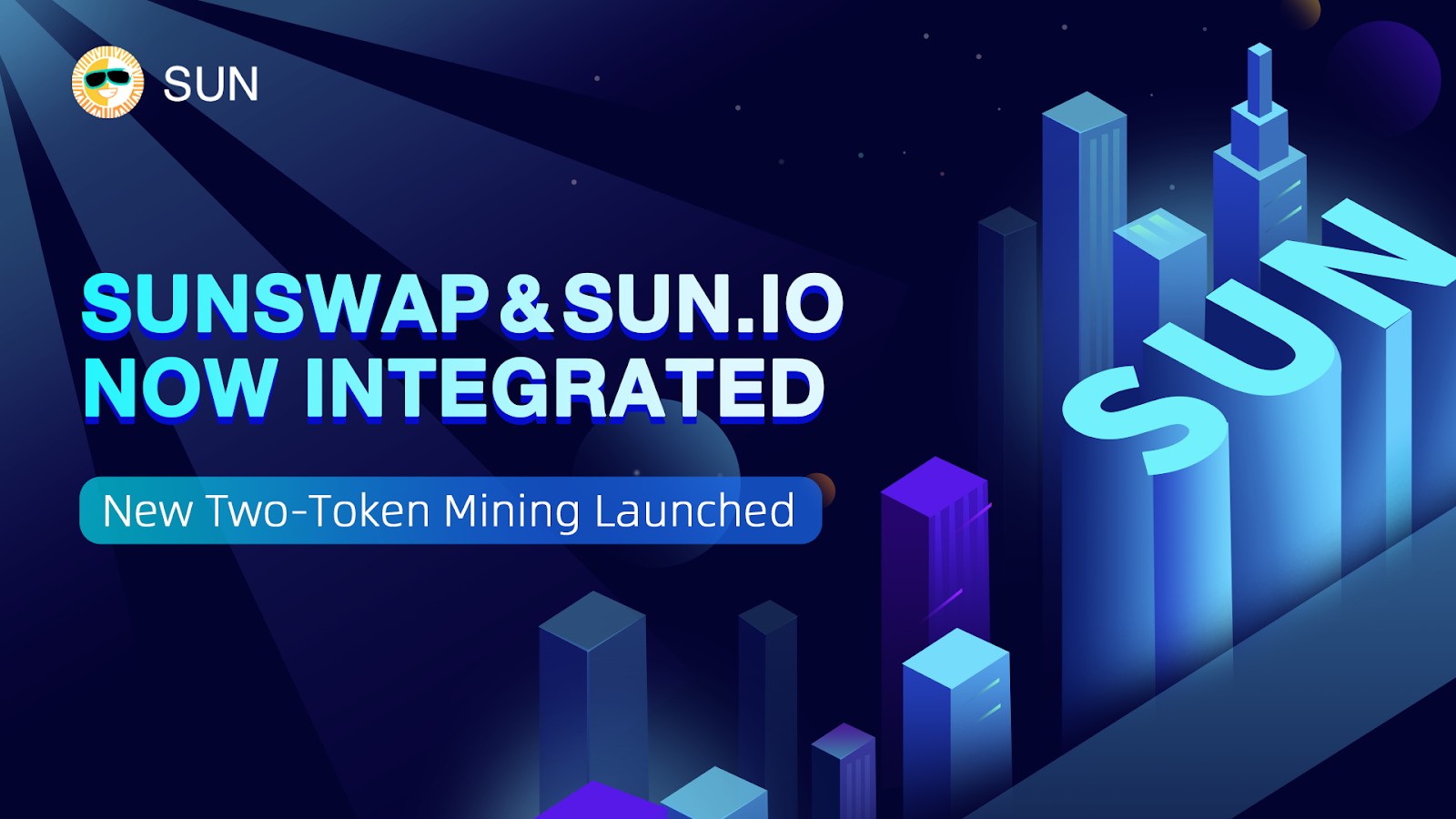 The up-and-running governance mining feature on Sun.io is well received by users, with a total value locked (TVL) of over $600 million to date. As Tron’s first platform that incorporates stablecoin swapping, staking-to-mining features and self-governance, Sun.io always hopes to scale up cooperation with premium projects while improving the platform. This is why governance mining is now open for applications on the Sun.io website to invite community projects to the Sun.io ecosystem.

With the goals of long-term value creation and a better overall user experience, SunSwap is making sustained efforts to upgrade its products based on users’ needs. With features such as one-click liquidity migration and improved user interfaces for the exchange, fund pool and explorer modules, SunSwap version 2.0 delivers a friendlier user experience. Users can also add liquidity to trading pairs of any two TRC-20 protocol tokens on SunSwap version 2.0, which frees them from redundant swaps and allows them to trade the most popular tokens right away.

With the launch of SunSwap version 2.0, the platform’s TVL has surged past $1.7 billion — with a staggering 34.1% annual percentage yield offered by the liquidity mining pool of Tron’s native token, TRX. SunSwap is gaining incredible traction among users by upgrading both its user experience and functionality, which marks not only another milestone for Sun.io and the Tron blockchain, but is also groundbreaking for DeFi and the wider blockchain industry.

Liquidity mining on SunSwap will end on Jan. 28, 2022, at 3:59:59 pm UTC, at the same time that reward distribution rules will be adjusted. Once concluded, SunSwap liquidity mining will no longer generate rewards. Previous rewards will be distributed according to the revised regulations, and users can still claim their rewards on the website as they used to. At the same time, the new pools will go live on Sun.io, marking the full integration of the two.

By staking LP tokens to participate in the new pools, users can earn mining rewards in addition to transaction fees.

How to mine on the Sun platform?

LP tokenholders can visit the Liquidity Mining page on the Sun.io website, find the mining pool they want to participate in, enter the number of tokens they want to stake and then wait to harvest their mining rewards when the staking begins.

In pools supporting two-token mining, one of the reward tokens is SUN, which is given by the SUN platform to governance mining participants. The amount of SUN rewards will be determined by the voting weights of the liquidity mining pools, which will be updated at midnight UTC each Thursday. Users can lock SUN for veSUN and boost their SUN mining speed by up to 2.5 times higher; they can also vote in liquidity pools with veSUN to decide how SUN rewards are allocated in different pools.

What is governance mining?

Governance mining is a stake-to-mine project launched by Sun.io for community self-governance. It now supports LP tokens in stablecoin LPs and SunSwap LPs.

The governance mining project’s second phase is now open. Users can choose an LP on the website to stake LP tokens and boost the mining speed of the chosen pool with veSUN. They can claim SUN tokens earned from staking directly to their wallets. Also, users can vote with veSUN to decide the weight of a liquidity pool: The proportion of veSUN votes determines how many SUN tokens will be allocated to a pool as rewards.

The SunSwap and Sun.io integration and resulting new mining pools have diversified use cases for SUN — allowing community self-governance, adding further utility to SUN and facilitating the growth of the Sun ecosystem. As an integral part of DeFi and a key component of the Tron ecosystem, Sun will keep powering the entire DeFi space and provide its users with a solid platform that embraces complete autonomy across the board.

Sun.io is becoming a decentralized autonomous community with long-term vitality, and it will keep paying back to its community users with rewarding mining projects. Users are welcome to try the brand-new mining pools on Sun.io, and the platform is always open to high-quality project teams. Stay tuned for more exciting plans in the future.

The upgraded SunSwap will incorporate Tron on-chain token swapping, liquidity mining, stablecoin swapping, staking and self-governance — benefiting the Tron DeFi ecosystem by giving total effort to the DEX system. Furthermore, as a native utility token on SunSwap, SUN will be used to govern the platform, reward liquidity providers and buy back tokens with revenue on the platform, manifesting Tron’s original aspiration to extend benefits to the broader public.