Confidence in people hosting lotteries has been at issue and under debate for quite a long time. There is a widely known case of fraud that took place in Pennsylvania (USA). The host of a lottery with a huge prize, for that time, of $3.5 million replaced all the balls except those with numbers 4 and 6 with heavier ones. It was assumed that the machine would choose only lighter balls, so the host’s associates placed their bets on all possible combinations of numbers 4 and 6. As a result, the winning combination was 666, just as they expected.

Nowadays, when online-lotteries are so wide-spread, both hosts and developers of the software for lotteries can skew the results. Recently, head of cyber security department of MultiState lotteries association, Eddie Tipton, acknowledged his guilt in fixing the lottery in the United States Court. He modified the code of a few lotteries that he took part in, which made him win jackpots for 12 years. He managed to rack up a fortune of over $10 million.

The advent of blockchain technology and smart-contracts allows us to reduce the chance of fraud in gambling.

SmartBillions managed to become the third most fair and transparent lottery in the world. With the appearance of SmartBillions the century-old history of cheating in the lottery industry has finally gotten its chance to change its tack.

SmartBillions is a lottery based on Ethereum smart-contracts. It is completely decentralized and doesn’t have an owner. The whole process of the lottery is ruled by the smart-contract and runs entirely on the Ethereum network, which means no one can influence it, including its developers.

It gives participants confidence in the lottery and in the fact that no one but the legitimate winners can pocket the prize. No existing lottery could ever ensure this level of security. Moreover, the smart-contract’s code base is an open source solution that can be reviewed by anyone who wants to assure themselves of its credibility.

The creators of SmartBillions managed to revolutionize the gambling industry and create a unique product that solves all existing problems in the industry. All this makes the project attractive for investors.

It is common knowledge that gambling (including lotteries) is a multi-billion industry that is highly popular all over the world. Of course, investments in this kind of business will pay off multiple times.

SmartBillions’ ICO in going to be launched on October 16, 2017. There  will be 252 million tokens of the project released under the name PLAY Tokens (tokens created in accordance with ERC20). Initial value of each PLAY Token will be 0.001 Etherium, which equals approximately 30 cents. Total value of all PLAY tokens released will be 200,000 ETH or $58 million. 79.37 % of the whole amount of tokens will be for sale during the ICO. 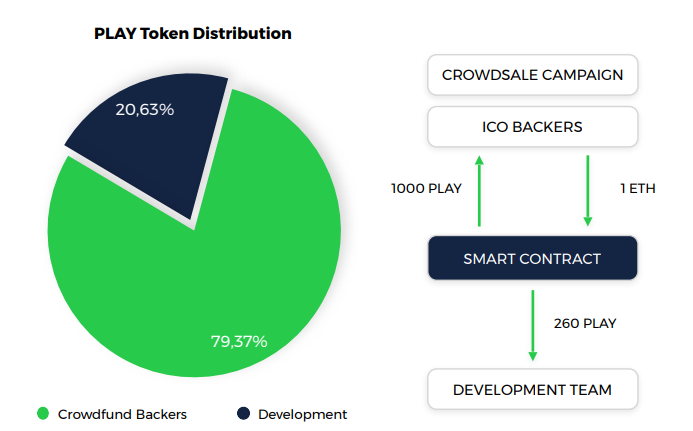 Two weeks after the end of the ICO, PLAY Tokens will be available in the most popular cryptocurrency exchanges of the world. According to projections, market price of the tokens will be way higher than posted during the ICO.

The lion’s share of the funds attracted during the ICO will form the Jackpot of the lottery. All the rest will be used for marketing purposes. As a guarantee for the investors in case of an unexpected drop in the exchange rate, the developers of SmartBillions implemented a feature that allows them to partially refund the money at 71.43% of the initial price. It reduces the risk dramatically and if we look at the project’s growth prospects, it makes investment in PLAY tokens even more attractive than most offers on the ICO market at the moment.

The details of how investors in SmartBillions will be able to make a profit from PLAY tokens are stated in the Whitepaper for the project here.