The rise of crypto banking

If 2017 was the year of initial coin offerings, then 2020 and 2021 belong to decentralized finance, especially in the form of crypto banking. When skeptics first come across the words crypto banking, some of their first thoughts are: What’s wrong with the existing system? Why do we need crypto assets, and why do we need to bank with crypto? If you’ve ever had similar thoughts, read on.

What’s wrong with the existing system?

Time after time, we’ve seen centralized authorities manipulating currencies to an extent that can be characterized only as reckless. We saw it during the 2007–08 economic crisis when the biggest banking institutions were forced on their knees due to this very recklessness; taxpayers across the world had to step in. However, despite the massive setback (about $1.2 trillion), no lessons were learned, and the institutions continued without any meaningful checks. This gave birth to the infamous term “too big to fail” where certain banks, companies or sometimes entire sectors were considered so essential for our economy to survive that it would be acceptable to bail them out in case of failures using our hard-earned money.

National institutions and authorities continue to exercise perhaps excessive power over the people’s money. The point is that if it’s mismanaged, the currency you hold so dearly might not be worth the paper it’s printed on. Venezuela, Zimbabwe and Argentina are some of the most recent examples, but dig a little deeper, and we see that even developed economies such as Germany are no exception.

Even the governments of the United States of America and India are no strangers to playing with the paper currency of today’s age. Quantitative easing policies, demonetization and other such measures are additional reasons not to trust any central authority with people’s money.

It is crucial to understand that the existing currency system works on the concept of trust. While it had served its purpose faithfully for about 3,000 years, it’s now time for an upgrade. It’s time for a decentralized system to exist, wherein trust is unnecessary. Of course, if you’re familiar with crypto, you’re already familiar with this narrative, with Bitcoin’s white paper, which gave the world exactly that. A peer-to-peer, decentralized and trustless form of currency that operated on the extremely secure blockchain technology.

Calling Bitcoin (BTC) the “single best hedge against the traditional financial infrastructure,” venture capitalist Chamath Palihapitiya urges you to buy the cryptocurrency. “Whether you support the fiscal and monetary policy or not, it doesn’t matter. This is the schmuck insurance you have under your mattress.”

In other words, even if you do support the fiscal policies, you won’t look like an idiot if and when some policies invariably fail. Companies, such as Tesla, have already invested heavily in Bitcoin as their liquidity reserve, with more organizations following their lead.

Why bank with crypto?

While Bitcoin and other cryptocurrencies have begun working their way toward mainstream adoption, there were many inherent limitations that needed to be solved. However, as the popular saying goes, “Rome wasn’t built in a day,” and a transition from a system in place for about 3,000 years is going to take some time. People understand the potential of cryptocurrencies and have bought them and hold on for dear life — a concept that is now popularly called HODL (although the origins of the term were actually from a typo in 2013) in the crypto sphere. In fact, the popular crypto platform Vauld began its journey under the name “Bank of Hodlers” with the goal to solve some common problems faced by hodlers.

Hodling was undeniably the best strategy in 2018, as people began to fully appreciate the potential of Bitcoin’s future. They bought Bitcoin purely for its future utility without caring much about the market prices. However, despite its market value, Bitcoin is not worth much (as the intention is not to sell and profit from the increase in price but rather wait for global, or nationwide adoption).

Not only are your investments idle and/or illiquid (yes, you can sell your position, but that defeats the purpose of hodling) but you can’t use them for transactions until cryptocurrencies become regulated and accepted. It’s almost like our understanding of hodling is wrong. This is where platforms like Vauld come in.

It becomes essential to not simply hodl crypto but rather use it like any other currency. With platforms like Vauld, not only can you continue to hodl but you can also earn more on your existing crypto, ensure easy spending, raise liquidity without selling your crypto assets, and use the platforms as a medium of exchange. In essence, platforms like Vauld give crypto assets the ability to be used as a store of value, enable easy spending, allow capital exchange, and be used as a medium of exchange — giving you the ability to bank entirely with cryptocurrencies in a decentralized manner.

Vauld, previously Bank of Hodlers, is a popular crypto platform that strives to create a banking system that is faster, secure and more decentralized than the current system. It offers everything anyone might want when banking with cryptocurrencies and more. Apart from offering the core fundamentals of banking and enabling hodlers to completely bank on the blockchain, it operates on completely transparent business logic. This ensures no hidden fees or charges and gives customers exactly what they see. The team raised $2 million in a round led by Coinbase Ventures and Pantera Capital. 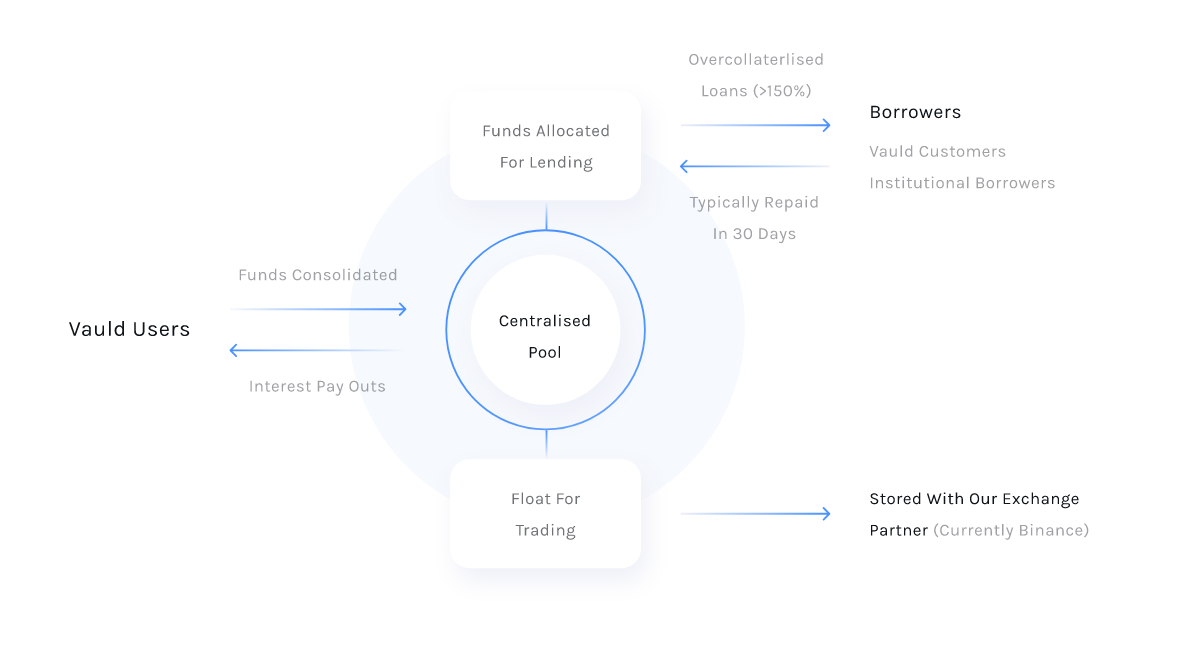 It also offers a high yield of up to 11.57% (one of the highest yields on offer across the sector) on your cryptocurrencies, enabling you to grow your capital just like you would with regular currency.

Banking isn’t just about earning a high yield, though. The model also involves real borrowers, taking credit on the blockchain and arguably working as the true enablers of this blockchain banking revolution.

For borrowers, it’s the instant approvals, the lack of any hidden fees, coupled with the flexibility to pay back at any time, that make Vauld a compelling option. The interest rates are competitive, enabling hodlers to preserve their crypto assets while leveraging credit to their liking.

Vauld also functions as a fully operational exchange, making this an all-in-one platform. This also means that traders can earn interest on their tokens while trading them. And, the Know Your Customer process takes no more than 30 minutes. All of this on a platform that charges an industry-leading 0.05% maker and taker fee.

With a customer-first experience and seamless product management, there are solutions for versatile needs at Vauld. There are more products in the pipeline apart from lending, borrowing and trading in cryptocurrencies, which is a sign of how much this crypto bank has grown since its inception in 2018. Amid all the growth, the quality of its customer service has remained stellar. The founders are often answering customer queries directly on the official Vauld Telegram channel.