SmartPlay.tech presented its users the first roulette in which players became able to place bets and receive a guaranteed win using free bonuses and RLT tokens already traded on the exchange and having a real value. 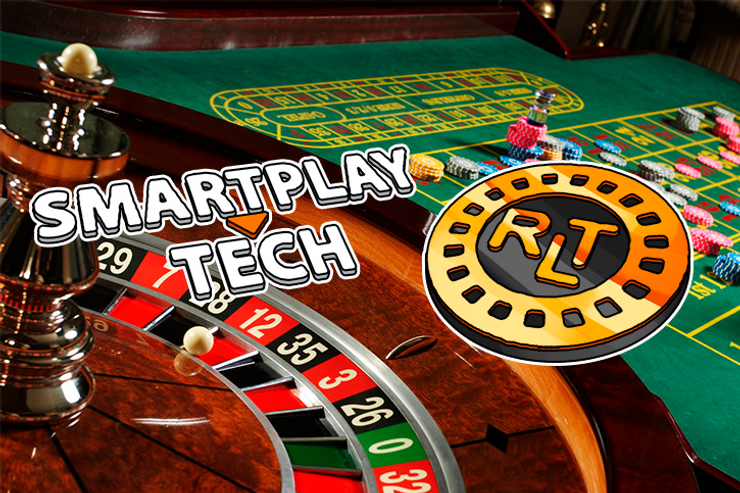 SmartPlay.tech presented its users the first roulette inwhich players became able to place bets and receive a guaranteed win using free bonuses and RLT tokens already traded on the exchange and having a real value. Just for 4 days over 2,000 players participated in testing a new game with 187 000 game rounds. Once the release was announced by the platform, token price soared up to $0.7

We remind you that this is the second game from the platform-developer. The first blockchain European Roulette beta version .was released in February 2017. The latest innovations of blockchain technologies used in the product allowed making the game "provably fair" and solving the problem of cheated players. Thanks to the use of Ethereum smart contracts the game process has become completely transparent and open to any Internet user, from the moment the bet is placed to the random number generation. At the same time the instantaneous record of information in blockchain ensures the absence of interference from the provider and absolute fairness of the result.

The game that regularly pays dividends

Since the launch of the first version of smart roulette hundreds of crypto enthusiasts and users familiar with the world of smart contracts and blockchain technologies have been involved for testing and playing. According to the statistics posted on smartplay.tech website during this time more than 15,000 game rounds and 37,000 bets were made for a total of about 7,000 ETH ($ 1,540,000 as of 06/03). Being an innovative solution, SmartRoulette project became also the first roulette, the players of which were able to receive not only real winnings, but also digital shares of the platform (RLT tokens) for each bet placed. Having at least 1000 Roulette tokens on the balance, users are automatically included in the list of participants in the distribution of dividends and begin to receive revenue from the profit of the game. Just for two months players and partners of SmartPlay.tech have been paid more than 467 ETH ($ 102,740 as of 06/03). Once listed on Livecoin crypto currency exchange on May 22nd, 2017, RLT token became available for purchase and sale in four currency pairs. At the moment project's capitalization is $ 6,914,079. The founders of the project are proud of the fact that in such a short period of time it was possible to create an efficiently functioning system, the value of which is equal for both players and investors.

We hope that users have already appreciated the results of our work, - SmartPlay.tech founders state, - in fact the main goal of our service is to provide an effective and high-quality product, the value of which is to create an interesting and winning game. We created the roulette, where everyone can not only win, but also become a co-owner of the project, in real time keeping track of the development of the platform and the growth of their profit.

In comparison with other similar game projects with capitalization of $ 20,000,000 - 30,000,000 SmartPlay.tech strictly follows the development plan demonstrating real results and building up a base of loyal players. This suggests that once active advertising is launched, the platform will be able to surpass many competitors and achieve an increase in capitalization by at least 3 times.

A provably fair no deposit game

The release of a new game version of SmartRoulette.io took place on June 5, 2017. Already now it is known that this is the first roulette game in which you can be guaranteed to win without using your own funds. Focusing on the average player of online casinos such as William Hill, 888 Casino, Winner, the developers of SmartRoulette decided to minimize the time spent in order to start playing. Reduction of the random number generation time of up to 3 seconds has been achieved due to modification of the generation mechanism and moving away from the installation of the extensions necessary to integrate the player's wallet with the roulette site. Now, in order to start the game the user does not need to go through long procedures of registering and verifying the account, spending time on additional plug-ins installation. The easy-to-play solution itself remembers the visitors and assigns them game nicknames, automatically identifying in the system. But that is not all. Immediately upon entering the website the player receives no deposit bonus in the form of 200 RLT tokens and can test the roulette absolutely for free receiving a guaranteed win after making 200 spins. Even in the event of an unsuccessful attempt, the user is given a second chance, using which he can get the status of Game God.

In the new game version users are able not only to play with free bonuses and tokens received for playing or participation in promotions, but also to refill the game balance with RLT tokens purchased on the exchange. Players who make deposits are given generous bonus up to 50% of the first deposit and receive 0.001% of each bet regardless of the game result. The bonus will be credited once a day and won’t require wagering in comparison with standard deposit bonuses.

In addition, the developers managed to achieve a multiple reduction in the bet processing time without affecting the current parameter of the integrity and fairness of the game process. Another good bonus to the players will be a decrease in transaction fees charged by Ethereum network, which inevitably increase with the growth of ETH price and reduce the size of the prize received by the user.

What is RLT token?

RLT token (Roulette token) is a digital share of SmartRoulette, the value of which is backed by the number of bets placed by users in European Roulette.

RLT token can be obtained in the following ways:
Playing roulette game. When placing bets in the first version of the roulette, the user receives up to 3% of return from each bet placed in the form of system tokens;
Purchase on the exchange. RLT token is available for purchase on Livecoin.net exchange for BTC, ETH, USD and RUR. In the near future RLT is expected to be listed on Bittrex crypto currency exchange.

Participation in promotions. SmartPlay.tech regularly conducts promotions and campaigns, playing and crediting its users with generous bonuses. Among the nearest plans of the team is launching campaigns for forum participants, social networks users, translators and bloggers.

How to make a profit

RLT holders have the whole spectrum of application of this digital asset at their disposal starting from placing bets in the new version of the roulette game ending with receiving dividends.

Playing roulette. RLT tokens can be used to place bets in the new game version of European Roulette. Users can play for real or bonus tokens receiving winnings in ETH or RLT depending on the game. At the same time, the reduction of the minimum rates and transaction commissions allows making the game even more profitable for all categories of players.
Selling on the exchange. Buying tokens at a bargain price or getting them for participation in promotions, users can significantly increase their capital by taking advantage of the growth rate. The current price of the token is $0.7 which is significantly higher than the price during ICO $0.07. In the near future according to the founders we can expect a substantial growth of this parameter, since the company successfully builds a pool of loyal players and does not spend resources on inflating the marketing bubble, as It is often occurs in the ICO market.
Receiving dividends. Having 1000 RLT on the balance, the user automatically becomes the recipient of dividends from the profit of the project, the size of which increases in proportion to the number of their tokens. Every day at 12:00 GMT the game smart contract checks its balance. If the roulette balance is greater than or equal to 300 ETH, the automatic distribution of dividends starts. Payments are made to those Ethereum wallets, which balances include the corresponding RLT tokens.

The amount of dividends is calculated using the following formula:

As the project progresses, the frequency of payments and the amount of dividends received will grow along with the growth in the number of players on the roulette website.

To increase the popularity of the project and attract players to the updated version of the game, developers are launching a large-scale advertising campaign with a budget of up to $ 100,000 per month. At the same time, there will be a release of 3D design, developed in a futuristic style. According to the team, the visual and sound effects used in it will make it possible to achieve maximum realism and to transfer visitors to the game hall of the future.
The company's further plans include launching an affiliate program, connecting a voting system for the owners of RLT token, allowing making decisions on the development and promotion of the platform, as well as developing and launching other versions of roulette and gaming solutions. The team makes every effort to ensure that every gambler can enjoy the game and easily become a co-owner of SmartRoulette.io project, one of the most innovative gaming solutions in the world from SmartPlay.tech.