Singapore, May 27, 2022 — There is a saying: “Bitcoin is to Gold what Ethereum is to the Internet.” After smart contracts were first introduced, Ethereum virtual machine (EVM) public chains (such as KuCoin Community Chain, or KCC, and Binance Smart Chain, or BSC) also thrive with the ecological rise of Ethereum (ETH). Among them, decentralized exchanges (DEXs) are the most revolutionary and serve as the infrastructure of these public chains. Klein Finance is KCC's first decentralized exchange (DEX) for stablecoins and long-tail markets, offering secure and stable “stable swaps” and nonfungible token “(NFT) trades'' for large trading orders with lower slippage as well as better market depth, lower transaction fees and higher staking rewards. 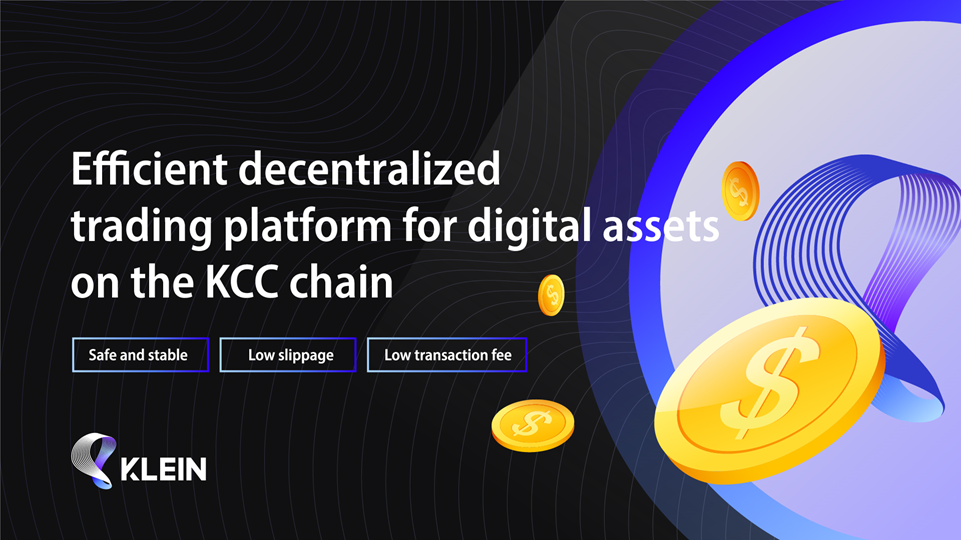 With major exchanges leaving the market by the end of the year, DEXs and EVMs behind major exchanges may usher in more users from centralized exchanges. The existing EVMs include BSC, Heco, and OKX Chain, with which we are familiar. Developed by KuCoin, the KCC (KuCoin Community Chain) focuses on the global market, and is worthy of attention.

KCC is a high-performance and decentralized public chain based on the source code of Ethereum built by members of the KCS community members and the KuCoin community. Its purpose is to solve the problems of low performance and high cost of the current public chain and provide users with an experience of speed, convenience and low cost.

Why Does KCC Need Klein Finance?

MojitoSwap was developed by a group of KSC community members and is the largest DEX on KCC. It can accelerate the development of the entire KCC chain ecology. So why does KCC need Klein Finance to be involved in ecological construction? Uniswap (UNI) is the largest DEX on Ethereum and one of the top ten DEXs in the world. At the time of writing, Uniswap has a TVL of $5 billion. Following Uniswap on Ethereum, there have been many new projects—such as SushiSwap (SUSHI), 1inch (1INCH), Curve Finance (CRV), etc.,— that stand on the shoulders of the giant and provide solutions to problems such as transaction slippage and impermanent loss, and further enhance the convenience of transactions.

Klein Finance provides a mechanism to create a cross-market for stablecoins, which can be called a “leveraged DEX.” This stability allows most of the liquidity to be concentrated around the price of $1.0 (or any actual price), a very useful feature for creating liquidity between stablecoins. This automated market maker (AMM) approach creates higher liquidity for KCC20 assets, which are not necessarily pegged to each other in a more efficient way than m*n = λ invariant. This creates 5x to 30x more liquidity than other exchanges and provides liquidity providers with higher profits.

This automated market maker with a dynamic peg greatly improves Klein Finance’s stablecoin and volatile currency trading model so it can accommodate volatile currency pairs. With Klein Finance's exchange rate system AMM, liquidity can be concentrated around an “equilibrium point.” It does not rely on external oracles to reach that equilibrium point, but relies on the transaction mechanism inside the traditional AMM system until this equilibrium point is reached. This method is called an “internal oracle.” Moreover, the liquidity generated by Klein Finance is more than 25x that of the MojitoSwap constant formula, offering higher liquidity for the KCC chain and higher profits for the LPs.

The peculiarity of stablecoins is that users' expectations for them are “fixed in price relative to the peg” — the greater the volatility of their prices, the greater the crisis of trust users have in them. Users tend to tolerate ETH-DAI; that is, the slippage of similar trading pairs. But the same slippage is unbearable in trading pairs such as USDT-BUSD, because its volatility does not meet the users’ original expectations for stablecoins.

Among other DEXs, the price of a cryptocurrency is determined by the ratio of the two tokens in the liquidity pool, so the crypto price changes with the transactions. In addition, when there is a lack of liquidity in the pool or the ratio of the two currencies is out of balance, a single transaction has a greater impact on the price fluctuation of the token; that is, the slippage is higher.

The Klein Finance model improves the automatic market maker and is a stablecoin exchange that reduces the slippage of stablecoin to stablecoin trading pairs.

One of the great advantages of decentralized finance (DeFi) is that it works like Lego bricks. The KCC is a new blockchain. To continuously integrate and expand this public chain empire, some powerful DeFi protocols are needed. Klein Finance will prove to be one of the best integration platforms.