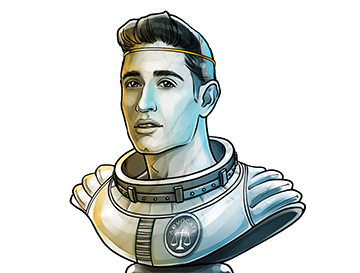 “Bitcoin is one of few hedges against a legacy, vapid monetary system that debases every time an uninformed politician regurgitates nonsensical fiscal policies.”

While studying finance at Washington University in St. Louis, 3LAU (real name Justin Blau) started playing DJ gigs, and soon enough, his hobby became his passion. He dropped out to fully dive into music, and by 2012, he had released an album and toured nationally. In 2016, 3LAU — now a world-renowned musician, DJ and producer — launched the dance music label Blume, the profits from which are donated to charity, raising over $200,000 in its first year.

3LAU’s journey into the world of decentralized technology started with the help of Tyler and Cameron Winklevoss, founders of cryptocurrency exchange Gemini, who he met at a performance in Mexico and with whom he remained friends. The inability to directly send money without an intermediary didn’t seem right to him, and crypto offered a solution. In 2018, 3LAU launched the sold-out Our Music Festival, the first-ever blockchain-powered music festival, which was held in San Francisco and relied on digital currency for purchases at the event.

Apart from simply being an advocate within the crypto space — and far beyond it — 3LAU, in partnership with digital-collectibles marketplace Blockparty, released digital music collectibles as nonfungible tokens in September. Earlier in May, he participated in the crypto community virtual charity concert “Dance, Donate, Decentralize,” which supported COVID-19 relief efforts and raised around $200,000. His active participation within the crypto industry has helped to popularize decentralized technology outside of the crypto community.

Following the impressive momentum of the crypto and blockchain space in 2020, Cointelegraph expects 2021 to continue the steady rhythm toward mass adoption. And while 3LAU plans to focus more on his music by releasing new albums and performing live, Cointelegraph anticipates him to remain an influential Bitcoin supporter, to keep exploring how to utilize blockchain tech in music, and to continue his charitable initiatives that will only become easier with emerging technologies.