Founder and CEO of Chiliz and Socios 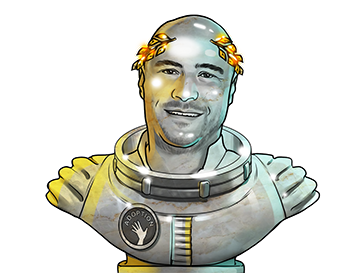 “Traders glorify the project's teams when it goes up, and despise them when it goes down. Yet the 'project' is the same, from one day to another. There is no change. Only emotions.”

Alexandre Dreyfus is an entrepreneur with years of experience in the gaming and sports industries. In the late 1990s, he founded Webcity, an interactive tourism guide platform. Dreyfus subsequently co-founded Winamax, which went on to become one of the largest online poker sites in France. Dreyfus’ experience in the gaming and sports scene also included the acquisition of the Global Poker Index back in 2013 and the establishment of Mediarex.

Dreyfus would later take his digital technology expertise to the burgeoning blockchain space with the creation of Chiliz, which raised over $66 million in funding, and the establishment of Socios, an online platform that allows sports teams to tokenize and monetize their respective fanbases.

Dreyfus set a target of 50 sports team partners for the year 2020. At the end of the year, the company was able to sign 19 official partners to the Socio platform, including popular football teams FC Barcelona, Paris Saint-Germain and A.S. Roma, among others. With COVID-19 restrictions preventing fan attendance at sports games, Dreyfus marketed fan tokenization as a way to drive virtual engagement in the sports industry, with many clubs launching fan tokens. The Chiliz founder also engineered a partnership with Binance Launchpool allowing partner clubs to introduce staking for their fan tokens.

Dreyfus plans to start 2021 with a $100,000 airdrop of Tether for fan token holders and other members of the Chiliz community. The Chiliz CEO also says other fan tokens will be listed on the exchange, with features like staking and nonfungible tokens coming to the platform. Utilizing fan tokens to drive engagement will also be a major focus point amid the growing social crypto-asset market.

With Chiliz recently announcing the launch of an A.C. Milan fan token, Dreyfus said that in 2021, the firm will "work harder than ever on our mission to fully establish Fan Tokens as the ultimate fan engagement tool and as a powerful new revenue generator for the sports industry.”

Specifically, this will include expanding into new sports, such as cricket and motorsports, as well as into pop culture projects in music and television. Chiliz also plans to open offices in Istanbul, Turkey, which proved to be a major market for the firm last year.