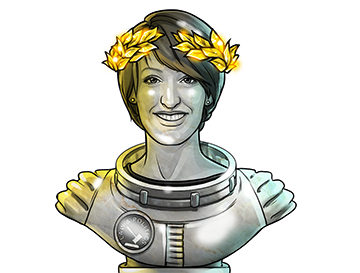 “The ‘tipping point’ for a currency seems to be when society realizes en masse why prices are really going up — namely, that the denominator of a price (the currency) is going down in value. All prices are just ratios, expressed as the value of the good (numerator) in terms of the currency (denominator).”

A Wall Street veteran, Caitlin Long first came across Bitcoin in 2012 in economics circles at the Austrian School. She fully immersed herself in 2013 when an article on how to buy and store Bitcoin hit her inbox. With a passion for “honest ledgers” and the goal to make securities markets fairer by issuing and trading securities on a blockchain, Long was chairwoman and president of the blockchain startup Symbiont until 2018.

Long made several headlines last year for her voice in the crypto regulatory arena. In February, she announced the establishment of the first crypto-native bank in the U.S., Avanti Financial Group. In October, the firm received a charter to operate from the Wyoming State Banking Board, just behind San Francisco-based crypto exchange Kraken.

Wyoming Governor Mark Gordon appointed Long to be a member of the Wyoming blockchain committee, and she used her influence to appeal to crypto users and others to support pro-crypto legislation in the state. June saw Long advocate for banking giant JPMorgan Chase to move to Wyoming to protect itself from a potential skyrocketing Bitcoin price.

Though the COVID-19 pandemic prevented many crypto events and conferences from taking place in 2020, Long was still an active speaker. She participated in both the Wyoming Blockchain Stampede and April’s Virtual Blockchain Week, urging firms to provide greater transparency in the crypto space and “not to recreate the same thing that happened in the traditional financial industry.”

Going into 2021, pro-crypto Republican Senator Cynthia Lummis will take her seat representing Wyoming. The pairing of a crypto-friendly regulatory environment and a pro-Bitcoin lawmaker may help further crypto adoption in the new year. Long has stated that Lummis wants to defend Bitcoin “against federal encroachment” and “believes in the philosophy” behind the digital asset.

Long may have several speaking engagements in 2021 as her state becomes a likely litmus test for the federal regulation of crypto in the United States. This year’s WyoHackathon will most likely be held in September.