Co-founder and president of Gemini 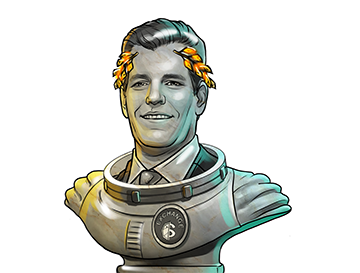 “All investors hope for financial freedom. Few achieve it. Because few Investments actually offer it. And those that do often require access (accredited investors only) or have low liquidity (startups). #Bitcoin is open to anyone, anywhere, and can be bought and sold anytime.”

Born in Southampton, New York and raised in Greenwich, Connecticut, Cameron Winklevoss is one of the most prominent figures in the cryptocurrency community. Along with his twin brother Tyler Winklevoss, he founded Gemini, a digital-currency exchange and custodian where he holds the title of president. Gemini was the first licensed Ether and Zcash exchange and was also the first to launch Bitcoin futures contracts. The Chicago Board Options Exchange, the largest United States options exchange, uses Gemini’s Bitcoin market data to create its Bitcoin trading products. The Winklevoss twins also founded Winklevoss Capital in 2012, a firm that actively invests in early stage startups. In 2018, Winklevoss and his brother were featured on Forbes’ first “The Richest People in Cryptocurrency” list.

Winklevoss earned an MBA from Said Business School at the University of Oxford. He is also a graduate of Harvard University where he conceived the idea for the social network ConnectU alongside his brother and his classmate Divya Narendra. In 2004, ConnectU filed a suit against Facebook creator Mark Zuckerberg, alleging that he had copied its idea. A settlement agreement was later reached for $65 million. Apart from his professional accomplishments, Winklevoss is also an Olympic rower, with him and his brother representing the U.S. at the 2008 Summer Olympics in Beijing, where they finished sixth.

Throughout 2020, Winklevoss continued to be vocally bullish toward Bitcoin and Ether across news and social media platforms. One of Gemini’s major highlights of the year was its partnership launched at the beginning of May with Samsung, a global leader in the smartphone industry, that allowed Samsung users to link their Samsung blockchain wallets with Gemini accounts to view their balances and transfer cryptocurrencies. In July, Gemini also announced its partnership with the privacy-focused Brave browser, which allows users to hold crypto from within the browser.

Gemini continued to expand its reach in 2020, encouraging European investors to use its platform by launching crypto trading against the euro and the pound sterling. In September, the Winklevoss twins announced their belief in decentralized finance when Gemini became a participant in the markets by listing 15 DeFi tokens. Alongside Kraken, Gemini announced trading support for Filecoin ahead of its mainnet launch on Oct. 15. Also in October, it partnered with crypto tax startup Taxbit to optimize cryptocurrency tax reporting for Gemini users.

2021 has started off with a bang for Winklevoss, with Gemini allowing Singapore-dollar integration for investors based in Singapore and PayPal announcing its investment in Taxbit, in which Winklevoss Capital is an existing investor alongside Coinbase Ventures. In January, media outlets started reporting that Gemini may file for an initial public offering or follow another means to become a public company. If it does do so, it would be one of the first major crypto companies to go public, which could significantly shake up the game.

The year should see Winklevoss and Gemini become more prominent in the cryptocurrency community, as Bitcoin hit its all-time high price in early January along with trading volumes and number of active addresses. Winklevoss’ 2013 prediction of a “small bull case scenario” came true in 2021 when Bitcoin became worth more than “40,000 USD per coin,” as he predicted, before seeing a correction.