Founder and CEO of Binance 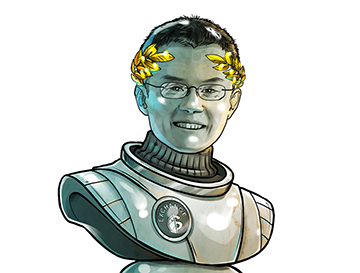 “When a company is serving multiple markets, it has to make sure the product offering is tailored to the local markets and keep on providing value or incentives for users to stay with the business. It’s the same for crypto exchange. We should adapt to changes quickly, keep on building and bringing forward innovative products to suit the various and increased demands of local markets.”

Changpeng Zhao, also known as CZ, launched Binance in July 2017 and has since grown it into the world’s largest cryptocurrency exchange for retail investors. It’s a long way from when he was flipping burgers while studying at McGill University in Montreal. In addition to leading Binance, CZ has also become a social media personality in his own right, with his trademark “funds are safu” having been launched into the crypto-meme hall of fame.

It has been a quiet year, by CZ’s standards.

Binance acquired CoinMarketCap in an April deal, causing many in the crypto space to question whether the data website could remain impartial. The exchange responded to the rise of decentralized finance by announcing it would allow staking through its Binance Coin. Following a Forbes report released in October, CZ denied allegations that the crypto exchange set up Binance.US to circumvent regulations and surreptitiously profit from investors.

Last year saw the launch of the firm’s own cryptocurrency debit card called Binance Card, an infrastructure solution for people to launch their own digital asset exchanges called Binance Cloud, and a smart-contract-enabled blockchain running in parallel to the Binance blockchain called Binance Smart Chain.

Zhao’s company sued two Forbes journalists in 2020, prompting a letter of support for the defendants from the Association of Cryptocurrency Journalists and Researchers.

Cointelegraph doesn’t expect Binance to lose its place as the top-rated crypto exchange anytime soon, but how CZ chooses to hold onto this lead is open to speculation. Despite closing its Ugandan subsidiary in November 2020, Binance could continue to expand into Africa — CZ referred to the continent as an “untapped market” for crypto.

The exchange will most likely face a changing regulatory landscape in 2021, both at its headquarters in Malta and even in established markets, with the potential rise of game-changing technologies in the crypto space. CZ has floated the idea of Binance purchasing its own bank and said he believes staking coins for liquidity through DeFi will likely last the test of time.