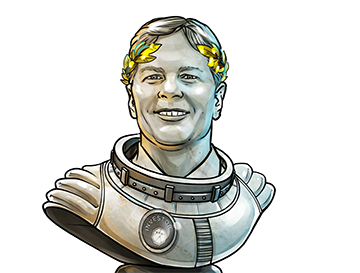 “We think the smaller-cap tokens — the things smart-contract-oriented, DeFi-oriented — they’re going to outperform Bitcoin. Bitcoin is going to go way up. Those things are going to go up even further.”

Dan Morehead founded Pantera Capital in 2003 as a global macro hedge fund. 10 years later, in 2013, the firm underwent a total rebranding as it began investing in blockchain and cryptocurrency. Today, Pantera Capital is one of the most prominent blockchain investment firms in the United States and one of the largest institutional owners of digital assets. In addition to offering several crypto-focused funds, Pantera’s Venture Investments division has invested in over 50 blockchain companies, including Bakkt, Bitstamp, Ripple, BitGo, Xapo and ShapeShift.

Morehead has scaled the Cointelegraph Top 100 as Pantera Capital’s clout in the cryptocurrency industry continued to grow throughout 2020, which was undoubtedly another big year for the firm. By August, Pantera had nearly tripled its assets under management compared with 2019, later embarking on a $134 million equity offering a few months later. Pantera was also one of several high-profile investors to back Globe, a cryptocurrency derivatives platform raising seed money to launch its forthcoming derivatives exchange.

In September, Morehead explained to Cointelegraph that decentralized finance represents one of the biggest opportunities in the blockchain industry, going as far as saying that DeFi could outpace Bitcoin’s growth in the coming years. In October, Pantera disclosed its intent to invest more heavily in DeFi moving forward.

2021 could see Morehead and Pantera Capital become more prominent in the cryptocurrency industry as the bull market continues to grow. Morehead is on record saying that DeFi has the potential to grow 100 times more than Bitcoin in the next three to five years. It therefore wouldn’t be a surprise to see Pantera pursue DeFi projects much more aggressively in 2021. That would mark a significant evolution from Pantera’s previous investment thesis, which was focused more on core blockchain and protocol infrastructure. The company’s current DeFi investments include Ampleforth, 0x and Balancer, among others.

In the meantime, Morehead has maintained an ultra-bullish outlook on Bitcoin. In January, he boldly proclaimed that Bitcoin’s price will hit $115,000 by August. At the time he made the prediction, 1 Bitcoin was worth roughly $38,000.