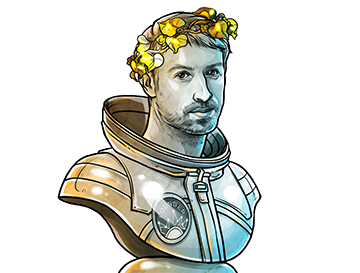 “Any power structure — regardless of initial purpose — will ultimately view retention of power as its primary goal. It's no surprise that those endowed with power find it difficult to hand over to a structure they don't control.”

Before creating the multichain interoperability protocol Polkadot, Gavin Wood was one of the co-founders of Ethereum, serving as its chief technology officer. The University of York graduate invented the Solidity programming language and published the yellow paper for the Ethereum Virtual Machine.

Since leaving the Ethereum project in 2016, Wood has gone on to develop blockchain software company Parity Technologies. He also founded the Web3 Foundation, which is an organization dedicated to popularizing the decentralized internet infrastructure, and Parity, a blockchain infrastructure platform with interoperability enabled by the Polkadot ecosystem.

As the lead developer of Polkadot, Wood oversaw a busy 2020 for the project, which began with its initial launch in May. The Polkadot developer also worked on the DOT token redenomination event in August, helping the project and the community to fight against unscrupulous exchanges that listed the “new DOT” tokens before the redenomination was concluded.

Detailing the achievements for the year, Wood revealed that Polkadot has gone on to dominate the crypto staking scene, with over 63% of the blockchain’s token supply held in wallets.

In 2021, Wood’s developmental activities will most likely revolve around Substrate 3.0 to bring full Ethereum compatibility to the Polkadot network. Cross-chain interoperability protocols will also be a major part of Wood’s schedule for the coming year.

Additional advancements in the Acala and Moonbeam toolkits could also make DeFi become a reality on Polkadot in 2021. Indeed, given the scale of protocol developments slated for 2021, Polkadot could establish itself as the second major DeFi ecosystem after Ethereum. Thus, it is possible for DOT to continue its positive price-action run as activity builds on the Polkadot chain.