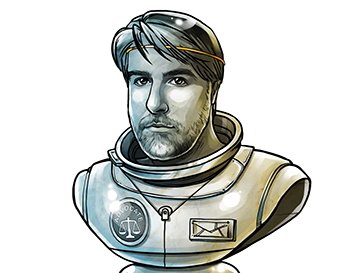 “The blockchain itself is like a young adult challenging the system, promising a future in which power is not so grotesquely limited to so few. It is a technology that perhaps can bring things to a healthy equilibrium… or not.”

Kevin Abosch is an Irish conceptual artist considered to be among the first to use blockchain technology as a medium. He has been profiled by The New York Times, Forbes and CBS News, among others, and his work has been displayed in multiple national museums as well as The Hermitage. Some of his notable blockchain works include “Yellow Lambo” and “IAMA Coin.”

In 2019, Abosch was also named creative director of game studio Animoca Brands, which is the parent company of The Sandbox.

It’s a great time to be an artist in crypto. There are plenty of examples of individuals who are making fortunes using nonfungible tokens to create and distribute their work.

But can NFTs truly be called blockchain art? Holograms, paintings and animations — these are familiar forms, and using NFTs to host relevant metadata is effectively using the technology to do little more than create a fancy canvas.

“What interests me more are pieces where blockchain is the method, where the soul or meat of the piece is integrally woven into the blockchain,” said Abosch in an interview with Cointelegraph. “The NFT only speaks to the platform that facilitated the mint and the sale.”

What makes Abosch’s work stand out are the ways in which it leverages the technology to turn an eye back on the platform itself, conducting what Abosch calls “experiments in value” — an apt reflection of blockchains, which are immaterial distributed ledgers now approaching a trillion dollars in value.

One example is his 2020 blockchain work “Hexadecimal Testimony.”

“I am excited by the metaphysical potential of cryptographic alphanumerics and in my series of works ‘Hexadecimal Testimony’ we have cryptographic keys, some truncated, sublimated into a lingual arcana and I believe a repository of sacred knowledge.”

Hexadecimal Testimony is part scavenger hunt, inviting intrepid chain explorers to dig in, and part warning about the power of artificial intelligence and chain analytics.

“My truth and the promise of crypto is that privacy is a human right, but as we’re seeing, in an effort to provide greater functionality by building layer upon layer upon the blockchain and as I have found in using AI, transactions are not as private perhaps as we would like them to be.”

Crypto is in for an interesting year in 2021: Hodlers will grow rich while the majority of the world faces a renewed wave of coronavirus-related shutdowns and strife. Abosch says it’s time we can use to look inward:

“Our value systems are being tested now in a profound way. I know people who live like hummingbirds, only slowing down to sleep. But due to the pandemic, the shutdowns, etcetera, they have been forced to slow down and be with themselves alone for prolonged periods of time — this is when you are forced to reassess the value of everything, especially the pricelessness of life itself.”

It’s a context in which Abosch’s work, whatever form it might take, will be more vital than ever.