Founder and CEO of Alameda Research and FTX 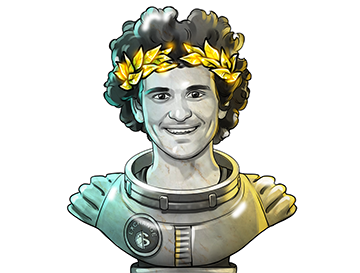 Still in his twenties, Sam Bankman-Fried is so committed to never missing an opportunity that he’s known to sleep on the bean bag at his Hong Kong office desk. After finishing his physics degree at Massachusetts Institute of Technology in 2014, Bankman-Fried spent three years as a trader at the quantitative trading firm Jane Street Capital before founding his own trading firm and liquidity provider, Alameda Research, in 2017.

Bankman-Fried founded the cryptocurrency and derivatives exchange FTX in 2019, which has grown quickly to become the sixth-largest exchange by volume, boasting a $3.5 billion valuation. He is also a well-known philanthropist and may have aspirations to political influence, donating $5.2 million to President Joe Biden’s 2020 campaign.

Despite his “tradfi” background, Bankman-Fried became a prominent figure during the decentralized finance boom of 2020. Unusually, he’s fairly agnostic about much of the space (though happy to make money from it) and takes a rather dim view of Ethereum in favor of his preferred platform, Solana. He built his decentralized exchange, Serum, on Solana and launched its namesake token in August.

Bankman-Fried’s Alameda is believed by many to have played a big role in various market moves, such as crashing the price of Yearn.finance’s YFI in October by shorting it — though Bankman-Fried has downplayed his impact. He was also unexpectedly handed control of SushiSwap by Chef Nomi in September following the uproar over Chef Nomi selling 38,000 Ether and crashing the price of SUSHI. Toward the end of that month, FTX launched “fractional stock offerings” — tokenized products representing shares of firms, including Tesla, Apple and Amazon.

Synthetix founder Kain Warwick said that the “tradfi” background of Bankman-Fried, who is also known as SBF, forced everyone in decentralized finance to sharpen up to compete. “Equities and other tradfi markets are hyper-efficient and if you’ve been successful there, you are used to thinking in fractions of a percent,” he said.

“That kind of laser focus, combined with access to large amounts of capital, was a bit of a shock to the nascent DeFi ecosystem when SBF first popped up earlier in the year. But I think many projects and DeFi players learned a lot from how Alameda, FTX and SBF himself came in and really went after every last cent.”

Bankman-Fried was named to Forbes’ 2021 ”30 Under 30” list in the category of finance, suggesting he is also making waves outside the crypto industry. Alameda, FTX and Serum will continue to release innovative products, such as FTX’s freshly launched Coinbase initial public offering futures.

He will continue to work toward his stated aim of attracting more than 1 billion people to decentralized finance and cryptocurrency, with FTX’s recent purchase of Blockfolio expected to bolster his own platform's numbers. He’ll also continue to push for the adoption of Solana and oversee the growth of the Serum ecosystem.