Host of "The Wolf of All Streets" 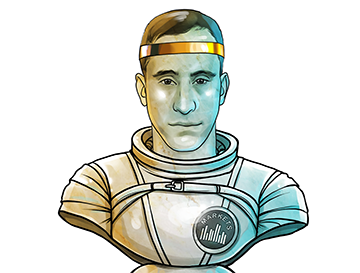 “This is the very reason that all investors should hold some Bitcoin — it offers idiosyncratic risk rather than systematic risk like other assets. Even if it is a RISKIER asset, having it in a portfolio reduces overall portfolio risk due to this lack of correlation.”

Scott Melker, also known as “Wolf Of All Streets,” is a trader and investor — both privately and at TexasWest Capital — the host of the popular The Wolf Of All Streets podcast, the author of “The Wolf Den” newsletter, and a writer and thought leader in the crypto space. He is also an adviser to a number of blockchain-based projects and has been a frequent contributor and commentator for Cointelegraph Markets. Melker was recently named “Influencer Of The Year” by Binance and has been recognized as a leading voice in crypto and beyond.

According to Melker’s words, “2020 was a banner year for the crypto space.” Pushing through the storm of critics claiming that Bitcoin was going to zero and that the store-of-value narrative was dead, Melker saw strong growth in his portfolio, Twitter account, podcast and newsletter. For Melker personally, the year didn’t start off on the right foot, with the investor falling victim to a SIM swap attack in February. But because his two-factor authentication was set up to use a separate, offline device, he was able to avoid any financial loss.

In April, Melker predicted that the fire ignited by the global economic meltdown would drive Bitcoin’s price higher. In a Twitter post, he explained his theory that Bitcoin was no longer a correlated asset to stocks. His rollercoaster year continued with his Twitter account (with 159,000 followers at the time of writing) being locked for more than 24 hours.

Melker believes 2021 will continue the 2020 narrative, with Bitcoin plowing its way ahead to higher prices. He is keeping a close eye on regulations, as he holds that their development will likely influence crypto’s future. As a result, he claims that there will be bumps in the road and it won’t be all smooth sailing from here. Melker will continue to focus on his podcast and newsletter in an effort to help educate the wider community around crypto and blockchain.