Co-founder and CEO of Robinhood 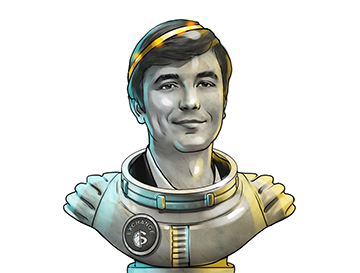 “We know that many people still don’t know how to build for their future, we know they feel excluded and think investing is not for them. They think it’s insurmountable. That’s just wrong. Technology should enable everyone to be able to participate and to be able to take that first step.”

Vlad Tenev is a Bulgarian-American entrepreneur who co-founded Robinhood, a popular trading app that lets users buy and sell fractional shares of some of Wall Street’s biggest companies. Tenev co-founded the company with Baiju Bhatt, whom he met while studying mathematics at Stanford University. Since launching in 2013, Robinhood has become one of the biggest investment apps in the United States, especially among younger investors who are just getting started in the stock market. In 2019, the app introduced cryptocurrency trading, giving retail investors commission-free exposure to Bitcoin, Ether and other cryptocurrencies.

Tenev became the sole CEO of Robinhood at the end of the year after Bhatt stepped down from his co-leadership role. Former Robinhood executives have described Tenev as the more “visionary,” “strategy-oriented” leader who will help the company during its expansion.

The move came amid speculation that Robinhood is planning to file an initial public offering in the coming months. In an October interview with CNBC, Tenev said his company is “not in a rush” to go public because it has secured sufficient funding already. “To us, it’s a financing event,” he said of the IPO, adding that he’s “very, very confident” in Robinhood’s capital position.

That being said, Robinhood ran into legal trouble over allegations that it misled customers about revenue sources and failed to satisfy its duty of best execution. The charges were settled after Robinhood paid a $65 million fine to the SEC.

With speculation about a Robinhood IPO likely to intensify in the coming months, Tenev can expect a lot of questions about the direction of his company. Bloomberg has reported that Robinhood is lining up a team of advisers for a possible IPO for early 2021. With Robinhood tapping into the younger demographic of millennials and Generation Z, 2021 may see a continuation of its growth trend — which would be consequential for crypto because the continuing gamification of financial speculation has powered retail apps and 24/7 global crypto markets alike.

The excitement around Robinhood, however, turned sour in January after the trading platform became embroiled in controversy over its decision to halt trading for several stocks — including GameStop, AMC and BlackBerry — that had been pumped up by Redditors from the r/Wallstreetbets subreddit in an attempt to short-squeeze large hedge funds. Many people both within the crypto space and without were critical of the decision, arguing that it played into the hands of big money investors and proved that the mainstream financial system is rigged. Tenev, for his part, defended the decision, saying that it was necessary to freeze trading in order to meet deposit requirements with its clearinghouses.

With 13 million accounts, Robinhood has the opportunity to spearhead the continued adoption of cryptocurrencies during the bull market, but some have argued that the platform acting to stop the purchase of stocks has instead only strengthened the case for decentralized finance and decentralized exchanges. Either way, Tenev started the year with the spotlight shining brightly on him, and the choices he makes next will have wide-ranging implications for traditional and crypto markets alike.