Co-founder and chairman of Animoca Brands 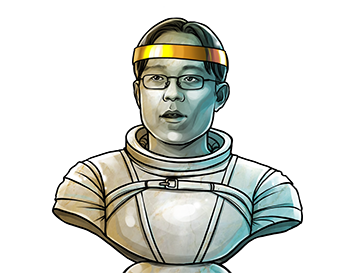 “It’s about time that there is a little bit of a revolution that happens in games, just like we had with the French Revolution during The Renaissance.”

Hong Kong-based entrepreneur Yat Siu was born in Austria and studied at the Music and Arts University of the City of Vienna. Both of his parents were musicians and urged Siu to pursue the same career, although he was more interested in technology and computers.

A stint working for Atari saw him relocate to the United States, but by the mid-90s, he had moved once again, this time to Hong Kong to set up the city-state’s first internet service provider business.

In 1998, he founded Outblaze, offering an early version of what would now be called cloud computing services, such as webmail and file and application hosting. However, following the dot-com bust, Outblaze found itself with some major competition in this field from companies like Google.

A series of acquisitions and licensing deals has seen Animoca Brands become a major player in the blockchain gaming space, with involvement in games such as The Sandbox and F1 Delta Time.

2020 was nothing short of sensational for Siu. In the first quarter, Animoca Brands posted record revenue, and this was before the full effects of the COVID-19 pandemic were felt, which further boosted the gaming industry, as much of the world’s population was forced to stay at home.

The Sandbox signed partnership deals bringing global intellectual properties such as Atari, Care Bears and The Smurfs to the platform, alongside regular land sale successes and an initial exchange offering through Binance Launchpad.

Meanwhile, F1 Delta Time racked up record prices for its nonfungible token sales, with one representing 5% of the world-famous Monaco Grand Prix circuit auctioned for $222,000.

Perhaps the most interesting thing about Siu’s successes in 2020 is that none of the games currently being hyped have actually received a public launch yet.

While boasting active alpha- and beta-testing communities, The Sandbox, F1 Delta Time and several others from the Animoca Brands stable will only be fully let loose in 2021.

A recent partnership with Binance will also see some of these titles utilize Binance Smart Chain as their preferred blockchain infrastructure. At that point, we could see in-game NFT interest go truly mainstream. And of course, Cointelegraph expects to see more games announced for release in 2022 and beyond.