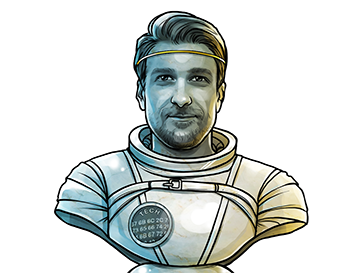 “What I’m doing right now is a dream come true, so I can’t be too upset. [...] Working in crypto, in startups, is very stressful. If you just consider the stress of startup life combined with the market volatility of crypto, you can only imagine the level of stress we were experiencing, even in good times.”

Educated as a lawyer at Villanova University, Andrew Levine was the general counsel for a real estate firm in New York for six years before shifting his career toward crypto and blockchain. He was one of the earlier entrants to the industry when he founded GiverHub in 2012, one of the first platforms to accept crypto donations for nonprofit organizations. Levine currently works as CEO of Koinos Group.

Levine started the pre-pandemic months of 2020 by resigning his position at blockchain-based social media platform Steemit, where he had served as head of communications and advocacy for more than a year. The resignation was directly in response to Tron, founded by Justin Sun, purchasing the firm in February and potentially leaving the decentralized project at risk of a centralized takeover.

The entrepreneur didn’t sit on his hands for too long, though, founding OpenOrchard with six developers who also left Steemit in response to the acquisition. The blockchain firm, intended to build innovative open-source technologies on top of Hive, was later rebranded as the Koinos Group and is currently behind the management of the Koinos blockchain.

The new blockchain is notable for its ‘modular upgradeability’, which Levine and his team are adamant is a necessary evolutionary step for blockchain technology. The purpose of the feature is to eliminate the need for hard forks.

The Koinos Group is still developing amid greater demand for digital privacy and many looking to blockchain technology for solutions. As with the founders behind the Ethereum blockchain, Levine is hoping to have a network appealing to developers looking to create applications, to drive home the message that blockchain can “touch every corner of the technology space.”

Along with his team, Levine plans to make Koinos a “fast and fee-less” blockchain that allows developers to create as many accounts as needed for users. The blockchain will reportedly address issues related to scalability, allow management to add features without impacting any other part of Koinos, and remove unused data from the blockchain while retaining the ability to bring it back — a feature Koinos refers to as “state paging.”