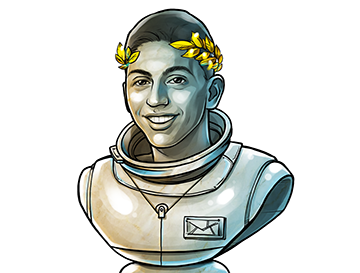 “We believe [crypto] represents a multi-trillion dollar opportunity that will drive the greatest wealth transfer event of the 21st century.”

After completing a major in finance and a minor in entrepreneurship at Rutgers Business School, Anil Lulla worked with Bloomberg as a corporate bond analyst for two years before moving to Deutsche Bank where he worked on structuring leveraged finance products.

Lulla quit along with two friends, with the trio founding Delphi Digital alongside two other former colleagues of his from Bloomberg. Delphi is a high-end digital-asset research firm that provides credible, actionable analysis for the crypto industry. It has since launched a venture arm and a consulting wing for the decentralized finance sector.

Lulla oversaw Delphi’s 2.0 revamp in 2020, which overhauled its member portal and introduced new data products, including a monthly round-up of the Ethereum ecosystem. He also hired new full-time staff to increase Delphi’s headcount from six to 20. Subscribers to Delphi’s research grew to more than 1,000, including membership from “most of the top funds and builders in the space.”

Under Lulla’s leadership, Delphi launched its venture capital fund in July, allowing the firm to become more active in the projects that it expects will make a material impact on crypto. In six months of operating, the fund team has already backed projects from 15 different countries.

Lulla also correctly predicted that Bitcoin would see a major bull market as investors sought a hedge against fiat currency debasement resulting from inflationary monetary policy amid the coronavirus pandemic.

Lulla has high hopes for the crypto markets in 2021, predicting six-figure BTC prices, the approval of a Bitcoin exchange-traded fund in the United States, Ether surpassing $2,000, and the total value locked in decentralized finance exceeding $100 billion by the end of the year.

Delphi will continue publishing premium reports that highlight promising projects and developments long before the herd finds them — following prescient calls on Synthetix, mStable and foreshadowing the DeFi boom.

Lulla is aiming for Delphi’s membership to increase by a factor of five in 2021 to exceed 5,000 and for its consulting wing to submit proposals to at least 25 different protocols.

Cointelegraph expects Delphi to place an increased emphasis on DeFi projects, which Lulla believes will comprise at least 25 of the top 100 projects by August due to capital flowing from the “zombie projects” of past bull runs into newer projects that “contribute to the broader crypto ecosystem.”

Lulla has stated that its venture wing will be looking into layer-two solutions, derivatives, decentralized autonomous organizations and NFTs in the coming year.