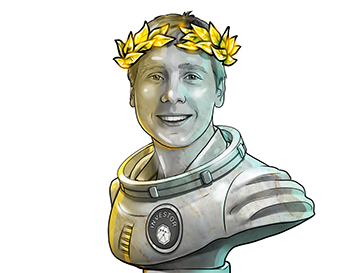 “In 2013, everybody thought we were crazy for launching a bitcoin investment fund. Well, look at us now…”

Barry Silbert was an early investor in the crypto industry, getting his start all the way back in 2012. Before getting into crypto, Silbert received his Bachelor of Arts in finance at Emory University, worked as an investment banker at Houlihan Lokey and was the CEO of Restricted Stock Partners. He went on to found two of the most widely known enterprises in the cryptocurrency industry, Grayscale Investments and Digital Currency Group.

Grayscale is most well known for its flagship Bitcoin investment trust, while DCG provides seed funding for blockchain-related companies, as well owning and operating Grayscale and Genesis Trading. An early investor in Coinbase and Ripple, Silbert has been named “Entrepreneur of the Year” by Ernst & Young and has also made Fortune’s “40 Under 40” list.

In 2020, Silbert continued to lead his firms into the cryptocurrency bull market. As Bitcoin’s price began to really take off in December, Grayscale brought back its “drop gold” campaign with a 30-second television ad on major networks in the United States.

Digital Currency Group expanded significantly in 2020. In August, DCG announced it was getting into the cryptocurrency mining game with its subsidiary Foundry. The new firm aims to meet institutional demand for capital access and offers crypto mining equipment financing, mining and staking, and advisory services as well.

In 2021, Silbert will continue to drive crypto adoption as institutions increasingly join the now $1 trillion cryptocurrency market. Indeed, as the world rang in the new year, Grayscale announced that it bought three times the amount of Bitcoin mined in December 2020, bringing its total assets under management to $20 billion dollars.

Early in the year, Silbert stepped down from his role of CEO at Grayscale and was replaced by the firm’s longtime managing director, Michael Sonnenshein. Silbert left the position in order to concentrate on his role at DCG, which experienced massive growth in 2020.

Like many in the crypto space, Silbert has his eyes on which company will be the first to go public with an initial public offering. He said, “All eyes are on the Coinbase IPO, which will result in the repricing of many companies in the space, and accelerate [mergers and acquisitions].”

Meanwhile, some analysts have predicted that a DCG IPO could fetch as much as $4 billion.