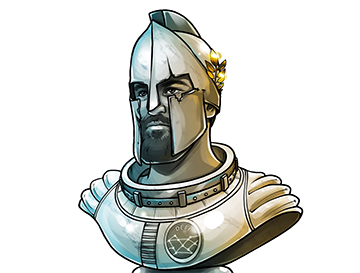 “You rarely make money by looking at things in the now (unless you’re an arber). You make money by betting where things are gonna go in the future.”

Degen Spartan is the pseudonym of a famous Twitter account known for hot takes about crypto and decentralized finance. Degen Spartan jealously guards his identity — his podcast appearance came in the form of another person reading his answers — but we know that he has a past in institutional trading and began his crypto journey by exploiting differences in prices between exchanges for profit. A self-styled “profit-maximalist,” Degen Spartan’s candid, often controversial, yet insightful, takes have propelled him to popularity within the Crypto Twitter community.

He is particularly fond of FTX and is “willing to bet” on its CEO, Sam Bankman-Fried. His initial fame came from being a wildly successful investor and believer in Synthetix.

Degen Spartan quickly gained notoriety for being skilled in “dumpenomics” — the art of exiting profitable positions, dumping large token sums on other traders — during the DeFi summer of 2020. At the time, he also revealed that his early Synthetix adoption had paid handsomely, with his position growing by $340,000 in 18 months.

But beyond the irreverent tweets, Degen Spartan has a keen understanding of the space and has shared many controversial takes with his followers. He believes that MakerDAO is a fundamentally flawed protocol, and he is also not particularly fond of governance tokens and the Yearn.finance ecosystem. His trading theses relied on finding and testing contrarian takes, though he has been willing to follow popular trends as well.

Degen has previously teased a possible rebranding to being “Prudent Spartan” in the future, although the character's most recent tweet in 2021 announced a "planned obsolescence". However, the possibility of DeFi 2.0 coming in 2021 may still see more smack talk, meme posting, psyops campaigns and money-printing from ambitious DeFi plays.

The mystery of his identity will likely remain. We don’t know if Degen Spartan is an alias for a crypto-famous person — though many have speculated that if it is, that person should be found on Cointelegraph’s Top 100 list — or if he is simply a very reserved average Joe. But the veil of anonymity certainly helps in going against the grain.