CEO and executive director of the Stellar Development Foundation 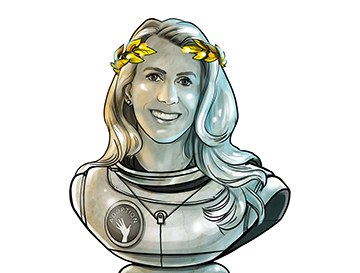 “I think that the institutional focus on Bitcoin has created positive momentum for the entire blockchain space. Personally, I think it is a reliable store of value. As is much debated throughout crypto circles and beyond, engagement with the network in the long term may present challenges and affect Bitcoin’s ability to translate to certain business applications and use cases, but I believe that storing value and holding value are irrefutably its strengths.”

Denelle Dixon is the CEO and executive director of the Stellar Development Foundation, a nonprofit organization that supports the growth and development of Stellar, an open-source blockchain network for money transfers from digital currency to fiat, which allows cross-border transactions between any pair of currencies. The SDF was founded in 2014 by Jed McCaleb, co-founder of Ripple, and lawyer Joyce Kim, and it has since partnered with big firms like IBM and Franklin Templeton along with various startups as well. The Stellar network aims to achieve “global financial inclusion” through blockchain technology.

Prior to joining the SDF in May 2019, Dixon was the chief operating officer and corporate secretary of Mozilla Corporation, first joining as an associate general counsel in September 2012. Before Mozilla, she worked with private equity firm Terra Firma as its director of U.S. legal strategy and Yahoo as its senior legal director.

Since taking the reins of the SDF, Dixon has helped the Stellar network by engaging in various strategic partnerships and investments. Early in the year on Feb. 26, SDF announced the closing of a strategic investment of $715,000 in DSTOQ Group, which was the first investment made through its then-new Enterprise Fund. On April 30, it announced the signing of an exclusive partnership with Elliptic, a firm that provides crypto-asset risk management services for crypto-focused businesses and financial institutions. In May, there were two major developments for SDF: It invested $5 million in Abra, a next-generation financial platform that will use Stellar as its blockchain back end, and it announced another enterprise fund investment of $550,000 in SatoshiPay, a platform that facilitates instant payments across the world.

Stellar was also announced as the official blockchain for USD Coin, a token from the Centre Consortium, which was co-founded by Circle and Coinbase.

In October, Dixon was invited to speak as a part of an International Monetary Fund panel on cross-border payments, where she focused on cost efficiency, innovation and building healthy competition.

Early in December, one of Europe’s oldest banks, Bankhaus von der Heydt, collaborated with Bitbond, Germany’s leading tokenization and digital-asset custody technology provider, to issue the euro-backed stablecoin EURB on the Stellar blockchain, making it the first stablecoin issued directly by a banking institution on Stellar.

On Dec. 17, the SDF announced its fourth enterprise fund investment of 2020 with $3 million in Settle Network, the largest digital-assets settlement network in Latin America for exchange and cross-border payments. In total, the SDF Enterprise Fund’s strategic investments of 2020 exceeded $9 million.

For Stellar, 2021 started off with an announcement early in January about its partnership with Ukraine’s Ministry of Digital Transformation, with which it has signed a memorandum of understanding to build a digital-assets ecosystem and national digital currency — aka, the central bank digital currency of Ukraine. With a focus on financial inclusion through blockchain technology, Dixon is set to help the Stellar network expand and increase its user adoption.

Another development worth watching in 2021 is the U.S. Office of the Comptroller of the Currency’s January announcement that federally chartered banks can act as blockchain node validators and use stablecoins. With one bank-issued stablecoin already on the network and traditional financial institutions increasingly looking to catch up with the digital currency revolution, it seems likely that Dixon will guide Stellar toward the path of recruiting even more banks to the network following the OCC’s regulatory green light.