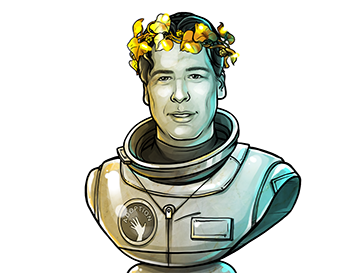 “This industry has a once in a generation chance to remake the financial landscape and the wider world. Doing that well means more than having great product skills and excellent operators — it means having the right values to build with integrity to the real needs and desires of users.”

A former professional poker player with a World Series of Poker bracelet to his name, Moncada co-founded Blockfolio in 2014 as a portfolio tracking app. The firm has since gone on to become one of the major mobile-focused resources in the crypto space for price and project updates, with a user base of millions.

During the 2017 crypto boom, the refresh rate on Blockfolio’s index became a leading indicator of market heat, as eager traders strained the company’s infrastructure during peak periods of FOMO. With those issues resolved, Blockfolio now supports more than 10,000 cryptocurrencies and 500 exchanges, and its web banners have recently alternated between advertising a “new trading experience” and promoting charitable giving through The Giving Block.

Moncada himself is meticulous about product design with a passion for exemplary retail experiences which has contributed to the sleek interface of the Blockfolio app and the new trading interface within it. He was also a founding member of the board at the Dash Foundation on which he served for several years, and where he helped conceptualize Dash’s Decentralized Governance-by-Blockchain.

Crypto exchange FTX acquired mobile-first Blockfolio for $150 million in 2020, though Moncada said that the firm will continue functioning as an independent app with an ongoing commitment to user privacy.

The acquisition is one of the largest confirmed prices paid in a rapidly warming crypto mergers-and-acquisitions space, and it proves that despite institutional interest in the sector, a massive base of retail users is still vital to crypto’s growth.

Moncada’s shared vision with FTX founder Sam Bankman-Fried was key to the success of the deal, as well as what Moncada described as their alignment on integrity and values.

April saw the Blockfolio CEO speak at the BlockDown digital conference. In December, Moncada spoke at the Paris Blockchain Week Summit on the adoption of blockchain technology, after the spring event was delayed due to the pandemic.

Moncada told Cointelegraph in August 2020 that crypto space is “at the beginning of a bull market that will bring more new users to the space.”

For FTX and Blockfolio, 2021 has already seen the introduction of a new “trading experience” which the exchange claims can on-board new users to crypto markets within around three minutes.

Now that he’s integral to marketing at FTX, and given Moncada’s passion for branding and mass communication, Cointelegraph would not be surprised to see major initiatives to bring awareness of both FTX and Blockfolio to a much wider, non-crypto-native audience. Moncada has commented extensively on demographic synergies between sports, music and crypto on occasion, and Cointelegraph will pay attention to see if there is further outreach in these sectors.

The Blockfolio app is likely to continue to be offered at no charge, per Moncada’s promise that the firm is “committed to providing our services free of charge to our end users.”