Co-founder and CEO of Lightning Labs 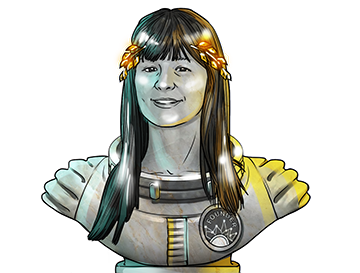 “We’re building the Visa network for bitcoin. But what I think is powerful, is unlike Visa, anybody can build on top of it.”

Elizabeth Stark is a blockchain​ entrepreneur, educator and lecturer in computer science at Yale University. In 2016, she founded Lightning Labs, a developer of the Lightning Network — a layer-two solution that seeks to combat the scalability issues within the Bitcoin network. The public beta version of the Lightning Network was released in March 2018, which outlined the first step in putting together an ecosystem for fast transactions across the blockchain.

Stark was notably quiet on the media front 2020, which may explain why she did not retain her top 10 position from last year’s Top 100. However, Lightning Labs has certainly not been resting on its laurels, with a continuous rollout of new developments and features.

This began with a new Lightning Network Daemon beta release, which implemented multipath payments, followed by the release of Lightning Loop beta, which provided an on-off ramp between the Lightning Network and the Bitcoin blockchain.

February saw a successful $10 million fundraising round to build a “Visa” network for Bitcoin. Further developments saw multipath payments come to Lightning Loop, a lifting of the 0.1677 BTC limit with Wumbo channels and a Lightning Pool marketplace for channel liquidity.

The Lightning Network development undertaken by Lightning Labs is often more evolution than revolution, and the technology has been allowed to mature at its own pace, largely out of the public spotlight.

However, the potential for the Lightning Network to make Bitcoin once again usable as a form of digital cash, rather than mainly as a store of value, cannot be overstated. While the network has been live on the Bitcoin mainnet since March 2018, it is still seen as experimental.

As the developments that Lightning Labs introduced in 2020 become stress-tested and trusted, we could see the technology making headway upon coming out of beta and receiving a full public launch. 2021 could be the year that the Lightning Network finally steps out of the shadows and achieves mainstream adoption. For example, several prominent exchanges, including Kraken, have already announced plans to integrate the Lightning Network to reduce withdrawal fees. Will more follow?