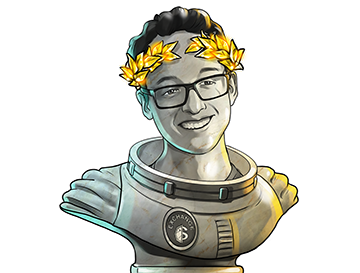 “Legit the coolest thing about this page is not Uniswap competing with cex, it’s Uniswap being the only one with country section blank. Ethereum is the closest thing to a country that Uniswap has.”

Hayden Adams came onto the crypto scene when he decided to learn how to code using the Solidity language that powers the Ethereum network. This was after he was laid off by tech giant Siemens, which was, according to him, “The best thing that ever happened to me.”

Thereafter, Hayden perfected his knowledge of automated market makers and decentralized exchanges, which led him to launch Uniswap in late 2018. The second version of the DEX came in May 2020, and soon, the total value locked on the decentralized application was going through the roof, inspired in part by the SushiSwap liquidity mining rush. But even with SushiSwap now running its own gig, Uniswap is still going from strength to strength.

Uniswap became one of the hottest crypto projects of 2020, spearheading the DeFi rush, and it’s still the biggest DEX by volume, despite several setbacks and a decision by the community to close down the Ether-based pools for its UNI token. No doubt in part due to the efforts by Hayden, in November, the exchange reached over $3 billion in total value locked, even surpassing Coinbase Pro by daily exchange volume at one point. Uniswap was also responsible for a quite sizable airdrop, giving out some 150 million UNI tokens to users and liquidity providers.

The biggest disappointment, however, came when a code copycat exchange by the name of SushiSwap took liquidity off Uniswap, with SushiSwap now posing to be the main competitor of the pink and white unicorn.

With the third version of the DEX in sight, the platform seeks to work on the three main areas: governance, scaling and improving its automated money-making. Nate Hindman, head of growth at Bancor, told Cointelegraph:

"We hope Hayden, Uniswap and the entire AMM ecosystem will join in Bancor's efforts to mitigate impermanent loss and make liquidity provision in AMMs less risky and more transparent for users."

In November 2020, Carlsbad Sunshine, CEO of LID, told Cointelegraph that “Uniswap is going to be around for a long time, and pooling may evolve, but it’s not going to end.”

Now, it will be up to Hayden to live up to such lofty expectations and build upon the successes that Uniswap saw last year. Will Uniswap manage to stay ahead of the pack and fend off the fierce competitors in the form of Curve and SushiSwap? So far, 2021 is playing out well for the DEX.