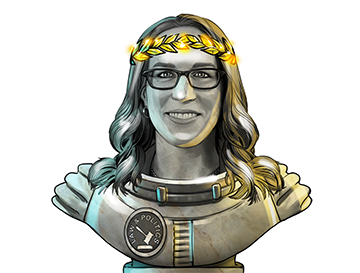 “There’s a lot of very sophisticated players in this space and there’s been a lot of work done to regularize the trading with Bitcoin particularly.”

SEC commissioner Hester Peirce, also known as “Crypto Mom,” is one of the most vocal proponents of crypto at the federal level in the United States. Hailing from Ohio and armed with a Yale law degree, she worked in a wide range of roles analyzing and making financial regulation prior to joining the Securities and Exchange Commission. Most recently before becoming commissioner, she was at George Mason University’s Mercatus Center, a libertarian-leaning think tank where she wrote, among other things, critiques of legislation such as the Dodd-Frank Act.

Peirce was nominated to the commission by both Presidents Barack Obama and Donald Trump and was first sworn in at the commission at the beginning of 2018, filling a seat that had been vacant for years. For the duration of her time at the SEC, Peirce has been a vocal advocate for the cryptocurrency industry. She has been one of the loudest voices pushing the commission to address its lack of clarity on issues such as which cryptocurrencies qualify as securities offerings.

Early on in 2020, Peirce introduced a safe harbor for digital assets that aim to become decentralized over time. The safe harbor would provide protection to good-faith projects that provide certain information to the SEC but don’t register as full securities.

The safe harbor comes on the heels of a number of SEC actions pursuing initial coin offerings backed by specific firms that aimed to decentralize over time. Once the SEC won its case with Telegram over the 2018 ICO for its Gram tokens, Peirce came out in opposition to the action. In 2020, she began her second five-year term.

The Republican Peirce is going to find herself in the minority as chairman Jay Clayton departs the commission and a Joe Biden nominee takes over. That said, Clayton was not especially forward-thinking on digital assets. President Biden has announced plans to nominate Gary Gensler, who would come armed with extensive crypto expertise and would likely be more ready to work with Peirce than Clayton was.

Major areas of work that Peirce is likely to take point on will be SEC approval of initial public offerings for crypto firms like Coinbase, the first U.S.-authorized Bitcoin ETF and, of course, that ICO safe harbor. Per SEC policy, we won’t get to hear what Peirce actually thinks about the SEC’s pursuit of Ripple until after the fact, but the outcome of that case will likely be a springboard for further clarity.

In January, Peirce told attendees of the Crypto Finance Conference that embracing innovation and providing regulatory clarity needed to be priorities under the incoming SEC chairman’s leadership: “We really need to embrace innovation and figure out how we can set up a regulatory environment that’s conducive to innovation, which I think in our space means providing clarity.”