Co-founder and CEO of Kraken 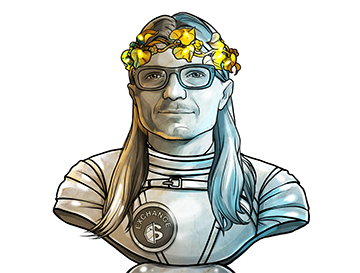 “You can't make this stuff up. This timeline is beyond twisted. Certainly didn't see a banking license in the cards when we set out on this mission 9 years ago. We have come full circle, crypto.“

Jesse Powell, a California State University graduate, got an early start with digital currencies in 2001 when he founded a firm assisting players in online games with account management and in-game currencies. In 2007, he founded the Verge Gallery and Studio Project, which he ran until 2010 as Sacramento's largest contemporary commercial art gallery at the time. All the while, his interest in Bitcoin grew.

After visiting Mt. Gox following its 2011 security breach, he began developing Kraken as a replacement in the event that Mt. Gox closed. Kraken was finally launched in 2013 — the year prior to Mt. Gox’s shutdown — by Powell, who was a regular at San Francisco crypto meetups that year alongside other pioneers including Jed McCaleb of Mt. Gox and Ripple and Brian Armstrong of Coinbase.

Powell has long been a strong proponent of cryptocurrency adoption and a vehement critic of attempts to overregulate the sector, making a number of scathing public statements about efforts by the attorney general of New York to crack down on crypto.

Powell piloted Kraken toward record trading volumes in 2020 and oversaw the exchange’s international expansion strategy as it reentered the Japanese market after a two-year absence and launched in Australia. Powell was vocal about his skepticism toward United States monetary policy during the pandemic, and like many Bitcoiners, he believes that money-printing underscores the need for hard digital currency.

In September, Powell led the push for Kraken to become the first digital-asset company to receive a U.S. bank charter recognized under federal and state law. This made mainstream headlines, with the exchange granted permission to become the first special purpose depository institution to provide comprehensive deposit-taking, custody and services for digital assets. “That’s like the holy grail,” Powell remarked.

A decade after he founded Kraken, in 2021, Powell will continue to pioneer the crypto space. In the first quarter of the year, he’ll oversee the launch of the Kraken Bank in Cheyenne, Wyoming, a turning point in the integration of crypto with mainstream finance that will put traditional banks to shame with its 100% backing.

Powell has shown himself to be highly adaptable in a fast-changing industry, and Cointelegraph expects to see Kraken move deeper into DeFi with more staking and earning opportunities on the exchange in addition to further integrations with decentralized protocols. “I think DeFi is the way of the future, and we’re investing in that,” Powell said in December. He has a year of evolution mapped out for Kraken, with an overhaul of its web and mobile interfaces coming, along with new fiat on-ramps and the integration of Lightning Network payments.