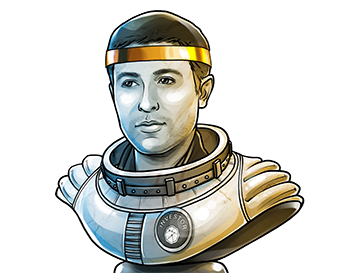 “Bitcoin itself has solidified its role as a store of value or as a digital gold.”

Michael Sonnenshein is the CEO of Grayscale Investments. His past experience includes working for JPMorgan Securities, as well as Barclays Wealth. He is also a member of Investopedia’s financial review board.

Grayscale is one of the crypto industry’s top avenues for mainstream folks looking to buy Bitcoin on the stock market. Grayscale launched its Grayscale Bitcoin Trust in 2013 shortly after the company was founded. GBTC is stock shares backed by fractional Bitcoin ownership, traded over the counter and available via traditional market brokerage platforms. Grayscale has added other products over the years, including Ether shares. Sonnenshein has been involved with Grayscale since 2014, assuming the role of managing director in 2018 and taking the reins as the company’s CEO in early 2021.

With the help of Sonnenshein, Grayscale has increased its prevalence in the crypto space, bringing its holdings above 500,000 BTC in 2020. The company picked up massive amounts of crypto assets throughout the year, at times buying BTC faster than miners could generate it. The firm also accumulated a notable amount of Ether.

“So, I talk to an institution, they now look at Bitcoin as part of the same flight to safety as they might look at bonds or gold or other things that have served in that capacity for them, and that wasn’t a widely held narrative probably until about the last 12 or 18 months,” Sonnenshein told media outlet The Compound during a March interview.

Holding one of the main avenues for buying Bitcoin in the traditional financial world, Grayscale will likely continue gaining prevalence, especially given the recent trend of institutional Bitcoin interest. Although some players opted to buy spot BTC, Guggenheim expressed interest in buying $500 million worth of GBTC. With Sonnenshein helping to lead the ship, the firm could also continue taking over more and more of Bitcoin’s circulating supply.

Given his appointment as CEO at the start of the year, one might expect Sonnenshein to continue with the same trajectory Grayscale has been on over the past year. “As CEO, Sonnenshein will set the strategic direction of the firm, scale Grayscale’s business by investing in its people and operational capabilities, and expand the ability of investors to access the digital currency asset class,” the company said in a public statement about the role shift, adding: “The firm expects to double its staff in 2021, as well as roll out multiple new products.”