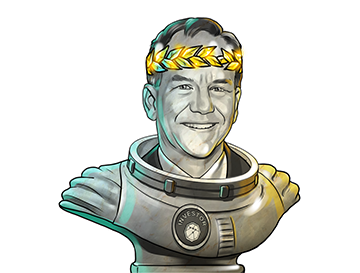 “The best profit-maximizing strategy is to own the fastest horse. [...] If I am forced to forecast, my bet is it will be Bitcoin.”

Billionaire hedge fund manager Paul Tudor Jones is famous for tripling his wealth by shorting the stock market ahead of the 1987 market crash. Born in Memphis, Tennessee and educated at the University of Virginia, he cut his teeth trading cotton futures in the 1970s before founding Tudor Investment Corporation in 1980. The fund now manages $38 billion in assets, and his personal wealth is estimated to be nearly $6 billion. Jones is a philanthropist, having signed The Giving Pledge to donate most of his wealth to charity. He has only a few major regrets: not investing more into tech companies in the 1990s and his friendship with now-disgraced entertainment mogul Harvey Weinstein.

In May, the billionaire revealed he had allocated 1% to 2% of his wealth into Bitcoin to protect it from the impacts of rampant money-printing amid the coronavirus pandemic. In a market outlook note titled "The Great Monetary Inflation," Jones said he had carefully considered gold, treasuries, stocks, currencies and commodities and saw a "growing role for Bitcoin." He told CNBC that Wall Street could be witnessing the historic "birthing of a store of value." Jones’ endorsement of Bitcoin caused a seismic shift in the way many within the traditional finance world view the cryptocurrency. Numerous analysts have said he legitimized Bitcoin as an investment class and paved the way for others to follow, including billionaire Stanley Druckenmiller and Michael Saylor of MicroStrategy.

Jones already made truly massive gains on his Bitcoin investment by the end of 2020, and with continuing fiscal stimulus strengthening the “digital gold” narrative this year, it’s possible he could choose to add to his investment or diversify his crypto-asset exposure. In a December 2020 interview, he sounded even more bullish, suggesting that a market capitalization of $500 billion for Bitcoin was too low. Jones also compared BTC to “internet stocks” in 1999, predicting that everyone “will be using some type of digital currency” in 20 years’ time. His continued endorsement will no doubt encourage others in the trade finance world to consider digital assets this year.