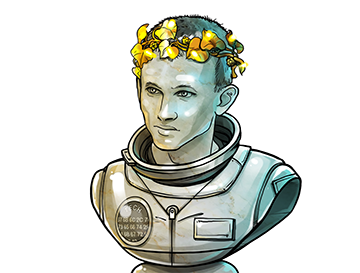 “2020 has been a strange year. [...] Politics around the world has gone in strange directions. [...] And yet at the same time, there are rays of hope coming from unusual corners, with new technological discoveries in transportation, medicine, artificial intelligence - and, of course, blockchains and cryptography - that could open up a new chapter for humanity finally coming to fruition.”
Vitalik Buterin's website

The name Vitalik Buterin should be familiar to anyone who is even remotely interested in cryptocurrencies, for the simple fact that the man is the co-founder of one of the largest digital currency ecosystems in existence today: Ethereum.

Born in the small Russian town of Kolomna, which has a population of just 150,000, Buterin from the very beginning was drawn to math and computer programming. When he turned six, his family immigrated to Canada.

In 2011, at the age of just 17, Buterin became the co-founder and lead writer for Bitcoin Magazine, widely regarded as the first publication to focus solely on all things crypto. During his time there, his reputation within the underground crypto scene grew to mythical proportions, with the young Russian-Canadian kid at one point even being in talks with Ripple’s Jed McCaleb. And even though he was immediately hired by the company, the deal fell apart as a result of Ripple being unable to facilitate an American visa for him.

Things took a turn for the better for the awkward genius when in 2013, he proposed the white paper for Ethereum, a decentralized, open-source blockchain featuring smart contract functionality. The project gained widespread traction almost immediately after its release, as is made evident by the fact that its development was entirely crowdfunded, and by mid-2015, the network had gone live with 72 million premined coins.

Lastly, in addition to his work with Ethereum, the programmer, philosopher and chess savant has also contributed as a developer to a number of other projects, including DarkWallet — founded by self-proclaimed crypto-anarchist Cody Wilson — as well as cryptocurrency marketplace site Egora.

Despite the COVID-19 pandemic completely turning things upside down for everyone, Buterin continued to make headlines throughout 2020. For example, in February — when public conferences were still a thing — he gave a detailed presentation in Denver, Colorado outlining the digital framework of Ethereum 2.0 and discussing the project’s decision to incorporate novel protocol designs such as proof-of-stake and sharding.

When the project ran into various setbacks and development issues in mid-2020, especially in regard to Ethereum’s rising gas prices, the outspoken programmer didn’t shy away from community criticism, going on record to say that Ethereum’s developers “hadn’t really been ding a good job of setting [gas rates] from the beginning.”

Furthermore, he highlighted how the project’s core developer base had greatly underestimated the technical aspects of various issues being faced by the Ethereum ecosystem as a whole, alluding to the fact that his team didn’t focus on developing a functional PoS model as well as issues pertaining to scalability and even going as far as saying:

“Had we known that it would end up taking us years, we probably would have designed the roadmap differently and thought about what the different teams would be working differently... making a lot of decisions in that regard in a very different way from how we are now, so, I think, definitely a lot of regrets and wasted time.”

Lastly, in his recently published 2020 endnote, Buterin threw shade at gold: “Gold is lame, the younger generations realize that it’s lame and that $9 trillion has to go somewhere.”

In a world where blockchains and cryptocurrencies seem poised to disrupt a number of industries — such as healthcare, telecommunications, manufacturing, etc. — it stands to reason that Ethereum will play a major role in the ongoing digital revolution come 2021. This is best highlighted by the fact that over the course of 2020, the number of decentralized finance apps developed atop the Ethereum ecosystem increased by a whopping more than 250%.

Furthermore, the total transaction volume across various Ethereum-based DeFi platforms increased from 11 billion in 2019 to an insane 256 billion in 2020, thus clearly showcasing a growing need for decentralization-based finance solutions globally.

Commenting on the rise of blockchain tech and where it will take us in 2021, Buterin opined that big corporations and other “complex forces” are leading more and more people to understand that cryptocurrencies and blockchain-enabled platforms are extremely useful for things like individual privacy, transparency and security, adding:

“It’s easy to say that any application can be done more efficiently with a centralized service, but in practice, social coordination problems are very real, and unwillingness to sign onto a system that has even a perception of non-neutrality or ongoing dependence on a third party is real too.”

As a result, Buterin is confident that that so-called “dumb and inefficient” solutions based on public blockchains, such as Ethereum and Bitcoin, will quietly keep moving forward and gaining actual adoption in 2021.