President of the People's Republic of China 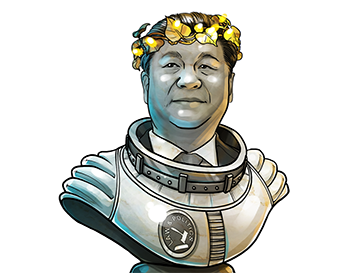 “We should [...] actively participate in formulating international rules on digital currency and digital tax to create new competitive advantages.”

Xi Jinping is the incumbent president of the People’s Republic of China and a major Chinese politician. Born in 1953, Xi took over as president in 2013 and is expected to remain the “president for life” after China approved the removal of its two-term limit on the presidency in 2018.

Xi is best known in the crypto community for his solid endorsement of blockchain technology and digital currency development. In October 2019, he called on the country to accelerate the adoption of blockchain as a core for innovation, triggering the propelled development of China’s national blockchain initiative and the digital yuan.

In 2020, Xi continued to maintain his positive stance on digital currency and blockchain technology, urging the global community to cooperate in formulating international rules for digital currencies to create new competitive advantages. At a G-20 summit in November, Xi called on the members to discuss developing standards and principles for central bank digital currencies, or CBDCs. The president urged the G-20 to properly handle all types of risks and challenges while “pushing collectively for the development of the international monetary system.”

In conjunction with Xi’s growing support for blockchain technology, China aggressively progressed with its CBDC and blockchain initiatives in 2020. As such, China’s digital yuan pilots had processed at least $300 million in transactions by November. In December, the Chinese government also hinted that it plans to launch cross-border CBDC transactions with Hong Kong.

China’s Blockchain-based Service Network, a nationwide blockchain initiative supported by the government, also saw multiple milestones in 2020. Piloted in 2019, the BSN rolled out its first set of blockchain integrations including Ethereum and EOS in August, later adding more networks such as Polkadot and Algorand.

Cointelegraph expects China’s President Xi to further encourage the accelerated development of digital currency and blockchain. It remains to be seen how China’s cross-border CBDC transactions will play out, but it will provide some solid basis for global CBDC initiatives and further development of the global financial system. A cross-border digital yuan, if realized, would also raise more questions about the U.S. dollar’s hegemony as the world’s reserve currency and the Chinese CBDC potentially being an economic cyberweapon.

It will be also interesting to observe the dynamics of the Chinese government’s relationship with private enterprise after the state halted Jack Ma’s $35 billion Ant Group initial public offering in late 2020. President Xi reportedly was the main figure behind the decision to halt the IPO.