The price of Cardano (ADA) increased by 85% in 10 days, officially surpassing Bitcoin SV to become the sixth-biggest cryptocurrency by market cap.

The price of Cardano (ADA) increased from $0.074 to $0.137, by more than 85% in less than two weeks. It surpassed Bitcoin SV (BSV) to become the sixth-largest cryptocurrency by market capitalization.

Three factors likely caused the intense rally of ADA in recent weeks. The potential catalysts are the new Shelley upgrade, favorable market structure and the rapid growth of the decentralized finance (DeFi) market.

Why the Shelley upgrade is so important for Cardano, and ultimately ADA price

On July 1, a node equipped with Shelley upgrade components was deployed onto the mainnet. By the month’s end, on July 29, the changes will be implemented on Cardano’s network through a hard fork.

The new Shelley upgrade has had a significant impact on the ADA price because of its staking system. Cardano is a proof-of-stake network, which means there are no miners. Users, who run nodes, maintain the network by staking ADA. In return, users benefit from the reward system of Cardano.

“Shelley will also see the introduction of a delegation and incentives scheme, a reward system to drive stake pools and community adoption. As a proof-of-stake network, users stake their ADA to participate in the network.”

The roadmap also states that by the end of the Shelley upgrade, Cardano is expected to become more decentralized with upwards of 1,000 stake pools. It adds:

“Come the end of the Shelley era, we expect Cardano to be 50-100 times more decentralized than other large blockchain networks, with the incentives scheme designed to reach equilibrium around 1,000 stake pools.”

The growing demand for ADA likely stems from investors who find the reward system under Cardano’s new upgrade compelling.

A breakout above a multi-year resistance level

Since August 2018, the $0.107 level has acted as a strong multi-year resistance level for ADA. Every attempt to recover beyond it in September 2018 and June 2019 was met with a fierce sell-off.

The last time ADA came close to testing the $0.107 level was during the first week of March, right before Bitcoin dropped to sub-$4,000. Within three weeks, the price of ADA fell by 71% from the local peak. 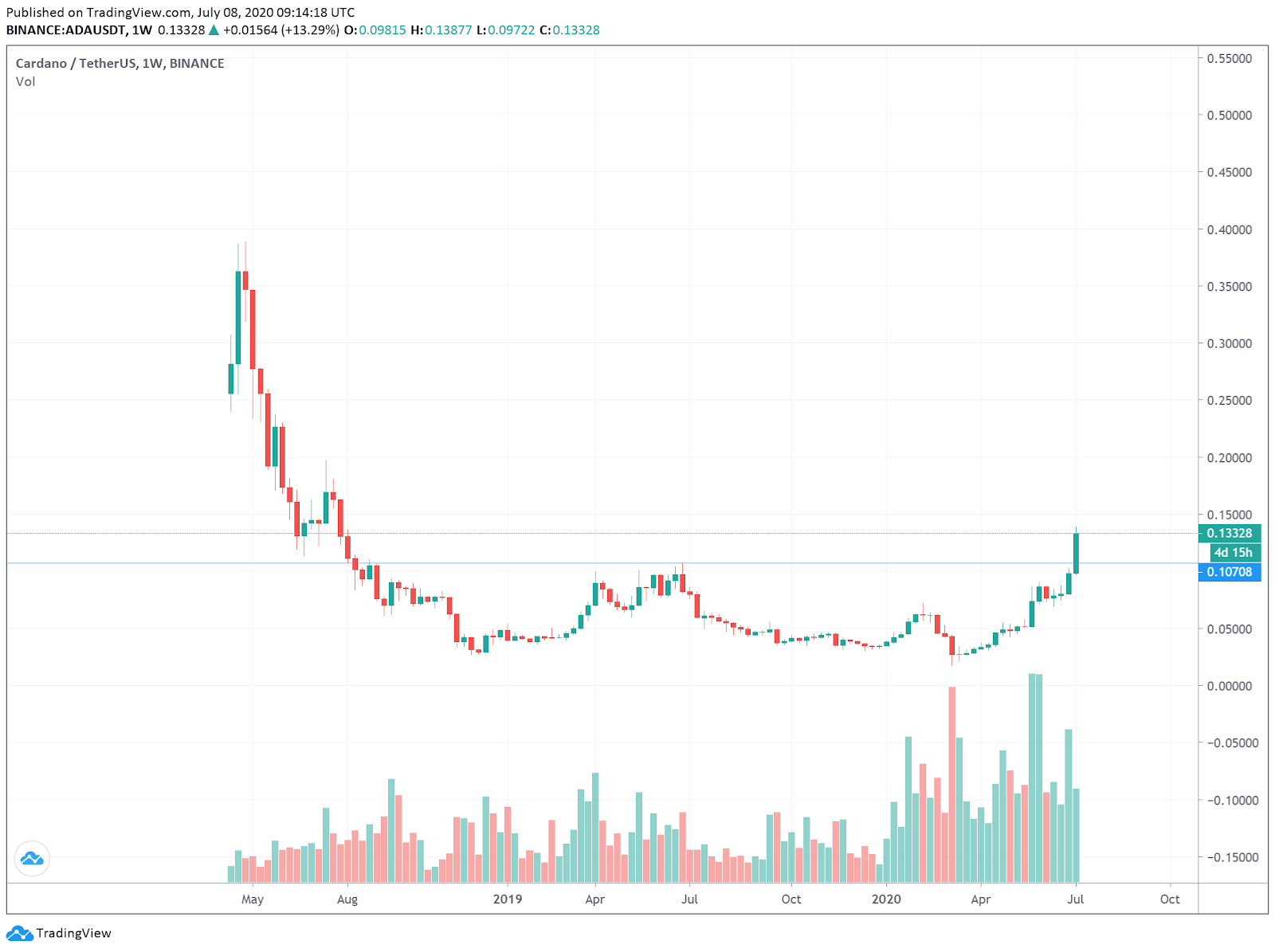 ADA breaks out of a multi-year resistance level. Source: TradingView.com

The recent price spike of ADA marks the first breakout of the critical resistance level since 2018. The favorable market structure of ADA and the lack of clear resistance levels above $0.17 likely caught the attention of traders.

The growth of the DeFi market

The DeFi market on Ethereum is exploding, surpassing $2 billion in total value locked across all DeFi protocols. In a recent tweet, Cardano founder Charles Hoskinson hinted that Cardano could soon become a key player in the DeFi space.

If Cardano evolves into the backbone of the DeFi space, it might present a new growth opportunity for the blockchain network in the medium-term.