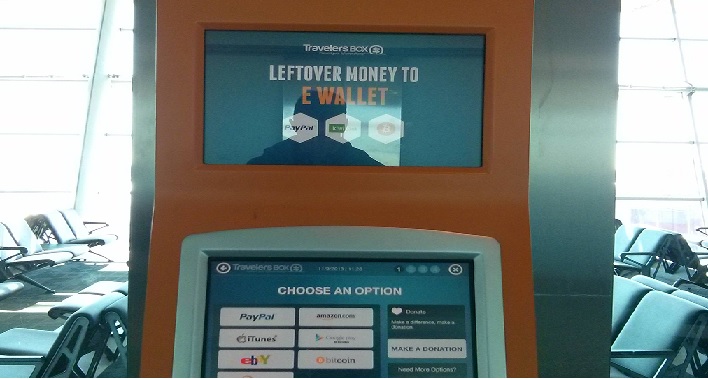 Machines like these have been tried before and still seem to find success on European ferry lines between ports where different currencies are used (UK to France, for example, or Stockholm to Helsinki).

Travelers Box added a twist to their machines, though. Users could convert their change into online accounts with PayPal, Qiwi, or Bitcoin.

Well, now the Bitcoin option is off the board because people found out about it and went nuts.

Said Travelers Box CEO Tomer Zussman: “Due to the high exposure we got from this community [Reddit] and the Bloomberg TV report we've been advised to reevaluate the legal status and regulation in regards to the kiosks at the airport. … Hopefully we will get some answers very soon and we will be able to bring Bitcoin back as a service on our kiosks.”

According to CoinDesk, the exchange volume and the demand for the service was way too high for the kiosk to serve.

The Bitcoin functionality had been integrated with the Mt. Gox platform and used its exchange rates. Travelers Box had been exploring a no-fee model for Bitcoins.

Travelers Box had indicated that after the Istanbul kiosk, they were working with some 40 other airports into which they could expand. It is not clear how the Bitcoin change affects these plans.

Ataturk Airport has seen the number of passengers it serves double in just five years, making it the sixth busiest in Europe.

Kiosks of any kind that offer Bitcoin exchanges are new, but their popularity is booming.

The world’s first Bitcoin ATM went into a Vancouver coffee shop this fall, and it already has seen weekly sales of 100,000 CAD, the Vancouver Sun reported.

Anecdotal evidence from Reddit suggests people have been lining up just to use the machine.