Ancora: Should You Invest in a Limited Edition Bitcoin Fountain Pen? 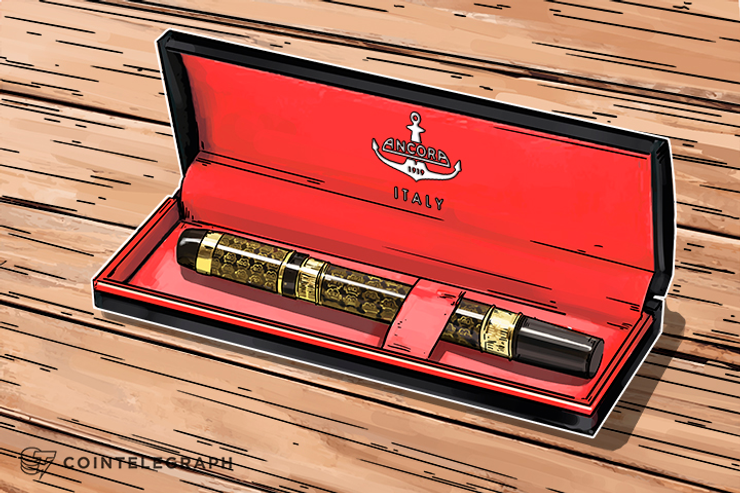 Alongside your investments in stocks, gold and Bitcoin, have you considered adding a writing instrument to your investment portfolio? While Italian pen-maker Ancora and digital moneymaker Bitcoin may seem to have little in common, the value of both assets is based on the economic concept of scarcity. Both the pen-maker and the digital moneymaker produce a limited stock (only 21 mln Bitcoins will be minted). The scarcer an asset, the higher its demand, and as demand increases so should its value.

Ancora has well understood the concept of scarcity since its inception in 1919 along Lake Maggiore in Italy. The maker of fountain pens and ballpoint pens produces its fine pens in limited editions.
Its latest special edition pen is the Bitcoinpen. If you are considering investing in one of Ancora’s 88 Bitcoin fountain pens or 888 Bitcoin rollerball pens, here are five reasons why fountain pens are an attractive investment.

Typically produced with gold and other precious materials, like gold, fountain pens can act as a safe haven investment. In addition to the quality of materials, investors value these fine writing instruments based on their rarity (limited editions), reputation and design themes.

Fine writing instruments are considered luxury collectibles that can retain and appreciate in value. With high sentimental value, fountain pens are passed on to future generations in wills. Those pens not kept as mementos may end up at auction houses as part of estate sales. Auction houses such as Christie’s and Southeby’s regularly have fountain pens for sale under $200, but it is not uncommon for a pen to sell for thousands of dollars.

Rarity is highly valued. The most expensive pens are typically part of special limited editions. One of 20 Ancora The Pulse of Time Square Limited Edition fountain pens is currently selling on eBay for $8,800, a seven-fold increase since the pens were introduced in 2015 and sold for $1,200 a piece. The pen contains mother of pearl, gold and silver.

Unlike many speculative assets, the value of pens may be backed by their materials. Currently among the world’s most expensive pens is a limited edition Boehme Papillon pen by Montblanc with 1,400 diamonds and gold selling for $230,410. A true rarity, a gem-encrusted pen made by Florentine pen-maker Tibalidi recently sold for $8 mln in Shanghai. Rare materials are an increasingly popular feature, with current offerings including rhodium, ruthenium, titanium and Ancora’s Minerals series (e.g., azurite and diopside). Newer designer Romain Jerome is selling a $5,000 pen (88 pieces) made from materials from the doomed Titanic ship.

Fountain pens have timeless appeal. As gifts, many writing instruments are ordered with a  custom monogram to personalize the pen. When the monogram belongs to a famous personality, a pen can become very valuable in the secondary market. Like watches, heritage adds a premium to fountain and ballpoint pens. When the near century-old Ancora went out of business in the 1970s for a decade, its pens became more valuable owing to its enduring reputation as a quality Italian maker of fine fountain pens.

While fountain pens have benefited from trends, including the vintage trend, long-term sustainable trends are now supporting the growth in sales. The environmentally conscious consumer is buying long-lasting ballpoint and fountain pens in place of disposable pens. Backed by the greening consumer, this trend is expected to remain positive and strong.

Writing your great novel with the Ancora custom designed Jules Verne pen, your screenplay with the Michelangelo pen or your song lyrics with the Signorelli pen can add inspiration and sentimental value to the writing experience. Fountain pens are commonly designed after famous personalities, including those from the literary, art, entertainment, sports and religious worlds.

As with any investment, researching the market can lead to better investment decisions. Japanese-themed pens of Dunhill-Namiki, for example, have done particularly well. Bonhams.com currently has an Emperor Tanabata theme, inspired by a well-loved folktale, selling for between $45,000 and $65,000. Five pens have been produced. Another Dunhill-Namiki pen signed by artist Shogo recently sold for $225,000—one of a number of 1930s era pens signed by Japanese artists selling at high prices.

Above all, cherished brands hold value in the luxury collectibles market. The Ancora Bitcoinpens can be purchased at half their retail price during the current production stage running from Jan. 5 to Jan. 26. The Bitcoin fountain pens normally retail for $2,500 and the rollerball pen $2,250.