Online men’s magazine AskMen has gone out on a limb and named a possibly fictional person one of the most influential men of 2013. 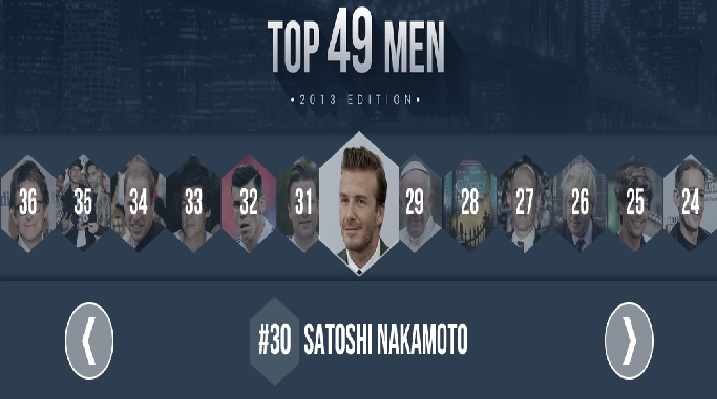 Online men’s magazine AskMen has gone out on a limb and named a possibly fictional person one of the most influential men of 2013.

Not that the credit is undeserved.

Satoshi Nakamoto is the name given to the founder of Bitcoin, though no one can confirm whether the name applies to a single real person, a collective of people or just a mythical creation.

Whoever Satoshi is, Bitcoin has surged in value in recent weeks and crossed the $700 exchange threshold in late November. Governments around the world are convening to discuss ways to regulate and tax the decentralized digital currency. Developers are slowly cutting inroads toward mainstream usage.

And, as AskMen put it, “what we are sure of is that his invention will have a great impact on the economy.”

The irony here is that a currency based around the idea of transparency has a pseudonymous, possibly nonexistent creator.

Satoshi’s name first appeared in 2008 when a research paper that spelled out the Bitcoin protocol was released on the Cryptography Mailing List with his name as the author.

The first Bitcoins, known as the genesis block, were released in 2009 as a result of Satoshi’s mining efforts. Tracing back along the blockchain, users can see that most of the first 1.5 million Bitcoins never even entered into a transaction — thus, whoever mined them is still holding them.

If that’s Satoshi, he could have a stash of around one million Bitcoins.

Speculation abounds as to who Satoshi really is. Theories attach the name to Gavin Andersen, the lead developer of the Bitcoin project; a group of cryptography researchers from Trinity College Dublin; a trio of encryption-technology patent applicants; and Mt. Gox co-founder Jed McCaleb.

Not that Satoshi’s identity matters so much today (unless you buy into some of the conspiracy theories surrounding Bitcoin’s creation).

Bitcoin allows users to participate on technological terms without having to hand over trust to support the currency’s value. That idea, whoever came up with it, is what matters: Substituting cryptographic proof for trust allows for a more robust and secure payment system in which two parties can make transactions directly, without the need for centralization, regulation or intervention.

With the currency moving rapidly toward wider adoption and potentially changing global commerce, the case is easy to make that Bitcoin itself is among the biggest and most influential stories of 2013.