Iceland’s bus stops are now decorated with advertisements for Auroracoin, the Icelandic cryptocurrency, which is set to have a new currency exchange next month. 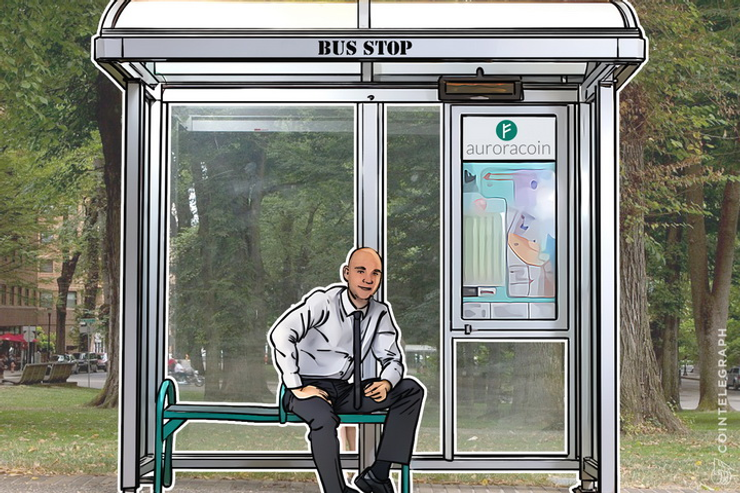 Advertisements for Auroracoin, the Icelandic cryptocurrency, have begun to appear at bus stops all around the country. The advertisement, consisting only of “Auroracoin” in text and the coin’s logo on a white background.

“We have been preparing for Auroracoin promotion in Iceland for over a year now as we wanted to create some proper infrastructure before we started to promote Auroracoin again in Iceland. The bus stop ad campaign is just the first of many to come. The reason we wanted to use the bus stops is because there is no other way to get as wide coverage in Reykjavík as in these bus stops.

With this campaign we creating brand awareness. That is why the posters in the bus stops are just one big white space with the Auroracoin logo.”

Preparation for a new Auroracoin/Króna exchange

The bus stop advertisement is slated to run for a week, and with it Aurarad.is, a website geared towards the general Icelandic public, was launched. Following that week, according to Árnason, the Auroracoin Foundation plans to open up ISX, the first cryptocurrency exchange in Iceland, where users will be able to buy and sell Auroracoin for króna, the Icelandic currency.

“For that opening we have prepared some media exposure here in Iceland. During that time people will be seeing and reading about the exchange and Auroracoin in the news and that is where our bus stop campaign will start to really show results as people will already be familiar with the logo.”

A first step to build public trust in Auroracoin

Árnason sees this first public ad campaign as a first crucial step to re-establish trust for Auroracoin prior to a resurgence for the cryptocurrency.

“And that is the purpose of the bus stop ad campaign. To re-establish the existence of Auroracoin in Iceland and to familiarize people with the logo and name. To show people that this is real and that increases trust for Auroracoin during the long road of adoption that is ahead.”