Bitcoin Pizza Day: 8 Years Later – Where Can You Buy Pizza With Bitcoin?

Bitcoin Pizza Day is celebrated annually by the Bitcoin and cryptocurrency community - marking an important, yet comical milestone for the virtual currency.

8 years ago, a user paid for two pizzas using Bitcoin, in what is hailed as the first ever instance that the cryptocurrency was used to pay for goods.

The moment is immortalized online in a Bitcointalk.org forum, where a programmer called Laszlo Hanyecz confirmed that he’d bought two pizza for 10,000 BTC from Papa John’s Pizza in America.

Hanyecz had initially solicited users in the forum to deliver two pizzas for 10,000 BTC, with a number of users offering to buy the pizzas online for him. Eventually a teenager named Jeremy Sturdivant, nicknamed Jercos, accepted the Bitcoin and sent Hanyecz two pizzas from Papa John’s.

On 22 May 2010, Hanyecz announced that he’d accomplished his outlandish goal.

At the time, as pointed out by another user in the thread, 1 Bitcoin was worth around 0.0041 meaning Hanyecz’ 10,000 BTC were worth a lowly $41. Today, the original value of a single Bitcoin pizza, $20.5, would cost you 0.0025 BTC, a staggering display of how much the value of the cryptocurrency has grown in the space of 8 years. 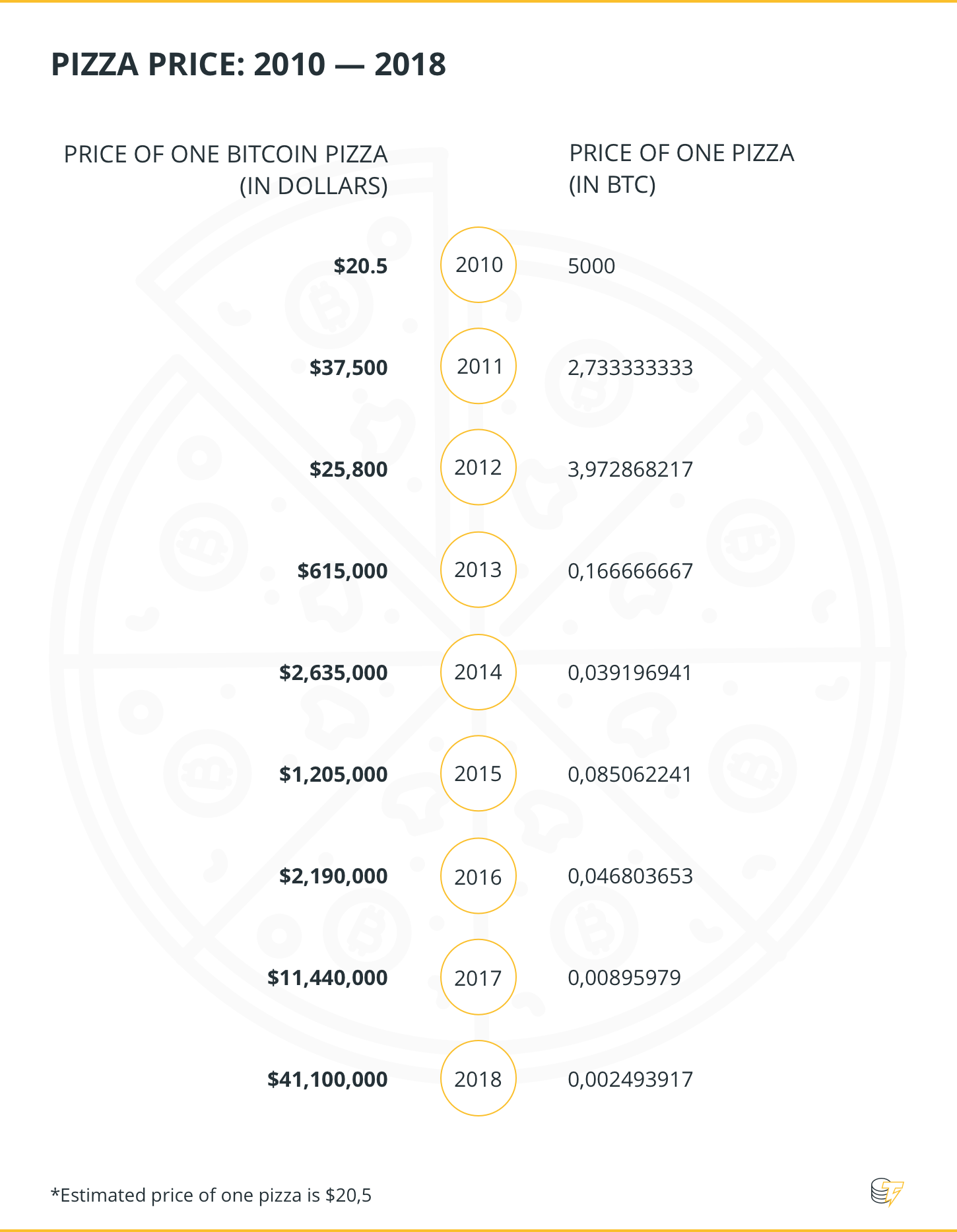 Can I buy pizza with Bitcoin today?

Services like PizzaForCoins, which was founded in 2013, accept various cryptocurrencies as payment, and then place orders on behalf of customers online. Egifter also offer customers an gift card that can be bought with Bitcoin - allowing users to then order pizza online through Domino's Pizza and Papa John's.

Clearly, the legacy left by Hanyecz’s original purchase has had a long lasting effect. Restaurants around America also accept Bitcoin as a payment method. A website called Bitcoinrestaurants has a database of 83 locations where you can settle your bill using Bitcoin.

On the surface, Bitcoin Pizza Day seems like a fun, quirky day for the crypto community to celebrate. However, the impact of that fateful transaction has shaped the cryptocurrency world forever.

Even Ledger, a well known producer of cryptocurrency hardware wallets, launched a commemorative range of its Limited Edition Ledger Nano S. Hanyecz gave the company his blessing, while touting the importance of good storage practices for Bitcoin users:

“Bitcoin was just a fun hobby project for me 8 years ago. When I paid 10,000 BTC for two pizzas I had no idea that Bitcoin would eventually become as popular as it is today, with people using it for real world transactions every day.”

Once again, Hanyecz’s pizza purchase is hailed as the first ever Bitcoin transaction for real-world goods, paving the way for the use of the cryptocurrency by users around the world.

Today, there are an average of 198,878 Bitcoin transactions per day.

Hanyecz is still actively involved in the cryptocurrency community and made headlines in February 2018, reliving his original Bitcoin transaction by buying two pizzas using the Lightning Network.

The programmer explained how he opened up payment channel with a friend in London, who then subcontracted the delivery - by paying for it himself - to a local shop.

As Hanyecz describes, his latest foray explores a new technology that hopes to reduce transactions times and costs on the Bitcoin network:

“So is there any point to doing this instead of an on chain transaction? For what I described here, probably not. The goal was just to play around with c-lightning and do something more than shuffling a few satoshi back and forth. Maybe eventually pizza shops will have their own lightning nodes and I can open channels to them directly.”

Hanyecz statement is reminiscent of his 2010 experiment - where he was simply wanted to “say that I paid for a pizza in Bitcoins”.

That original curiosity paved the way for Bitcoin becoming a revolutionary way for people to transact in a trustless, decentralized way. Only time will tell if the 2018 Lightning Pizza transaction will become a watershed moment for the second layer payment protocol.