The number of people using Bitcoin is doubling every year and will continue to do so, analyst Willy Woo predicts.

Bitcoin user numbers and investment are set to double every 12 months, commentator Willy Woo has forecast.

Citing data from Google, the increasingly controversial Woo calculates that Bitcoin doubles its users every 371 days.

Woo writes on his Woobull blog:

“What we have here is a steady exponential growth baseline with periodic peaks. These peaks are inline with price bubbles where more users start checking the price of their precious coins. Taking readings from the baseline results in an order of magnitude growth every 3.375 years. Or expressed in terms of time to double the user base it’s approximately 12 months.” 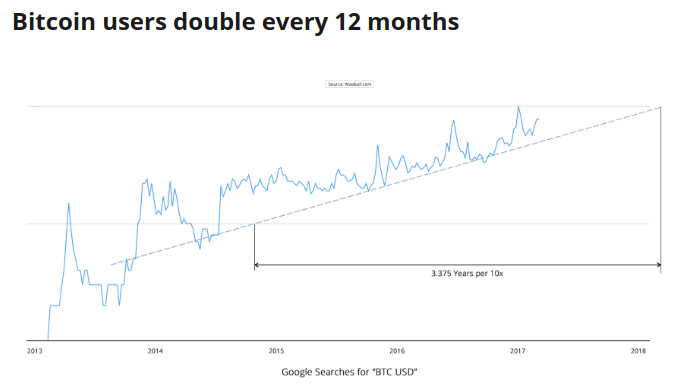 “Expect capital injections into BTC to be similar for the years ahead,” he added introducing the data on Twitter.

In terms of adoption, Woo expects a classic S-shaped curve as a trend for Bitcoin, like for other innovative technologies such as radio, computers and the Internet.

“If I was to assume Bitcoin’s adoption curve will be a symmetric S-curve, we’ll reach 50% adoption in 9 more years, however to complete the last half of the S will take 17 more years 26 years from today,” he added.

Woo is positioning himself as an increasingly popular source of analysis in the Bitcoin world, attracting both praise and criticism for his posts on social media.