Wired’s Daniela Hernandez has an awesome story on how Bitcoin is proving it is able to help provide for the homeless. 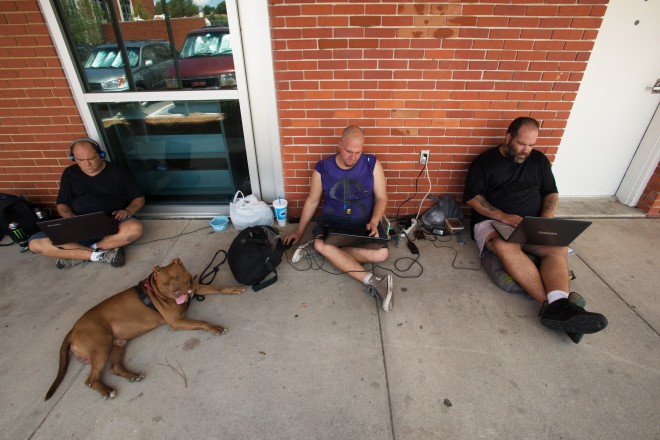 Wired’s Daniela Hernandez has an awesome story on how Bitcoin is proving it is able to help provide for the homeless.

The piece starts with a kind of hilarious photo of three guys and a dog sitting outside a Pensacola, Florida, public library, with their laptops plugged into the external outlets.

The three men are homeless and scrounging various internet sources for Bitcoins.

For anyone who has used the phrase “welfare queen” in earnest, this image has to be some kind of nightmare.

But really, it should be viewed as an illustration of how far a lot of technology has come.

Hernandez’s piece follows one homeless man in particular, a 42-year-old former computer repair tech, who has been able to earn 4 or 5 Bitcoins just by getting paid to watch YouTube videos or serving as an audience for in-app ads.

Here is one positive angle: Technology has become sufficiently cheap that the homeless can afford to carry it around, and this has allowed the homeless a more dignified way of scrounging for loose change.

Bitcoin is also convenient for donations. While transferring Bitcoins between accounts takes a bit more active effort than handing over some loose change, the transaction is smooth and effective.

Also in Pensacola, a homeless outreach called Sean’s Outpost has been able to make a big difference in that community through Bitcoins.

Jason King, the outreach’s owner, seems full of enthusiasm and has done a tremendous job getting the word out about his efforts.

Bitcoin donations from Reddit alone have fed numerous people in the city.

King has also established a nine-acre sanctuary called Satoshi Forest in Pensacola where the homeless are free to hang out and not feel hassled or like criminals. The spot cost $89,000 to buy, and the $600/month mortgage will be paid entirely in Bitcoins.

Hernandez touches on numerous other charities funded via Bitcoin, including Bitcoin100, the BitGive Foundation and Project FEED.

Let’s hope everyone driving the narrative about Bitcoin’s association with Silk Road and money launderers also has a chance to take a look at the good work these charities are doing.