10 years ago the cryptocurrency market did not exist, Bitcoin had yet to emerge from the mysterious brain of Satoshi Nakamoto, and Ethereum’s founder had just turned 13 years old.

In other words, the crypto market barely existed. Perhaps it was a glint in the eye of Bitcoin’s unknown inventor, but no one else had ever heard of “Blockchain technology”.

The means of creating a decentralized world were completely detached from reality. And yet, the crypto market cap is worth approximately $164.3 bln today.

It is, without a shadow of a doubt, one of the fastest explosions of wealth in human history.

Bitcoin mining produced the first generation of crypto millionaires. Then came the millionaires created through a series of crypto crowd sales, which in turn made Litecoin, Bitcoin, and Ether into legendary investment vehicles.

Now we’re entering a new stage of the crypto market, where commercial use-cases verge on mass adoption, use-case specific coins pop up almost daily, and government regulators complete rules on how cryptocurrencies will be governed.

With that being said, the crypto market cap may exceed $200.0 bln by year’s end.

Leading the charge for a higher cryptocurrency market cap are Bitcoin, Ethereum, and Ripple.

All of these cryptocurrencies foster an environment of growth, but none more than Ethereum. Its “smart contracts” spawned a generation of new crypto assets that raise money through “initial coin offerings,” or ICOs for short.

Companies or products like Gnosis and Civic, are flush with cash after using this method, although their investors did not gain a share of equity. Instead, the financiers gained rights to transact with the company’s native token, issued to them in exchange for Ether coins.

Now imagine a company’s bank coffers going from goose eggs to $153.0 mln in that time. More to the point, it creates an environment of “hypersonic growth.”

Creators and entrepreneurs are flocking to Ethereum to take part in the ICO revolution, bringing both their talent and intellectual capital.

Some people say this trend could rob venture capitalists (VCs) of their relevance in the startup world. It’s no secret that in 2017, Blockchain companies raised more money through ICOs than VCs. 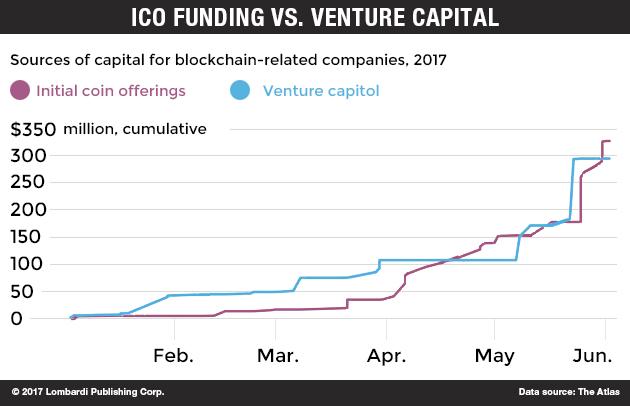 Everyone is aware that this trend is happening, yet some are reluctant to believe that such a system will yield underlying value. Are they right?

Why skeptics think the crypto market cap is overrated

Critics believe the crypto market cap is a bubble. They think Ripple price prediction is overblown, Ethereum price forecast is delusional, and Bitcoin price prediction...well, you get the picture.

They see a very different version of the story. They see a bunch of artificial assets that only exist in cyberspace being given tons of money, much like in the Dot Com Crisis of 2000. Internet companies ran wild on easy money, made little by way of profits, and ultimately led to a stock market crash.

To be sure, this version of history has its truth. But it fails in one, big way. Namely, it omits the end of the story, that technology companies did eventually take over the world.

Take a look at the highest-valued companies in the world if you don’t believe me—the names are Apple Inc. (NASDAQ:AAPL), Google or Alphabet Inc (NASDAQ:GOOGL), and Amazon.com, Inc. (NASDAQ:AMZN), not Exxon Mobil Corporation (NYSE:XOM) and General Motors Company (NYSE:GM). The prediction that technology companies would transform the world was absolutely true.

A lot of people got rich by not losing faith in tech stocks. Likewise, there is little doubt that Blockchain technology will transform the world, regardless of whether there is a price correction or not. The real money is in the long game.

If you’re still having doubts, consider this thought experiment: You go back in time to the morning of the 1929 stock market crash. Black Tuesday. One of the market skeptics tells you to pull money out of the market and never invest another cent.

You do the exact opposite. You buy a chunk of the whole market and never let go. And by some miracle of science, you both survive to this day. Who was right?

Almost every sane human being would feel tempted to say, “Of course you don’t invest! The market crashed that day you fool!”

That is true. The market certainly collapsed in 1929 and did not recover fully till the New Deal policies of Franklin Delano Roosevelt came into effect. But that doesn’t mean you should hide your money in the garden shed, especially because holding onto that investment would have made you a very rich man.

The long-term trajectory of the stock market is “up and to the right.” It continues to grow over time because that is the nature of capitalism. Money flows to real value, though not always at the right time.

So even if some ICOs are shady, writing off the entire crypto market would be a mistake. There are game-changing companies in this space, and ultimately, they could become as famous as Apple, Google, or Amazon, driving the cryptocurrency market cap into the trillions of dollars.

In the short run, however, it’s enough to assume the crypto market cap will continue its existing growth pattern, which would lead its cumulative value to approximately $200.0 bln before the end of 2017. Those who second-guessed it in the last decade have been dead wrong.

Disclosure: This guest post was written by Gaurav S. Iyer, security analyst for Profit Confidential. He advocates for commonsense, buy-and-hold investing. You can find his daily investment ideas and commentary at ProfitConfidential.com