The volume of Uniswap has surpassed the daily volume of Coinbase Pro after the demand for DeFi has exploded.

The volume of Uniswap in the last 24 hours. Source: Uniswap

According to the data from Uniswap, the platform processed $426 million in 24-hour volume. In the same period, Coinbase Pro saw $349 million in volume, according to CoinMarketCap data.

Why is the popularity of Uniswap rising so rapidly?

Since June, the total value locked in DeFi protocols surged from $1 billion to $7.7 billion, Defipulse.com shows.

Following the surge, many small DeFi-related tokens, especially governance tokens, emerged. Before they’re listed on centralized exchanges, they typically launch on Uniswap as it does not require the approval of central entities.

As an example, when yearn.finance (YFI) first released, it was trading on decentralized exchanges like Uniswap. Then, Poloniex, FTX, and eventually Binance listed the token.

Many small to mid-cap DeFi-related tokens are actively traded on Uniswap, especially those that are not listed on major exchanges.

The abundance of DeFi tokens on Uniswap supplemented by the fast expansion of the DeFi market has catalyzed Uniswap’s exponential growth. Hayden Adams, the creator of Uniswap, wrote:

“Wow, Uniswap 24hr trading volume is higher than Coinbase for the first time ever. Uniswap: $426M Bank Coinbase: $348M. Hard to express with how crazy this is.”

The surging user activity on Uniswap also coincides with a noticeable increase in the daily Ethereum transaction volume.

The Ethereum blockchain explorer Etherscan shows the number of Ethereum transactions have increased from around 435,000 in January to over 1.1 million in August. 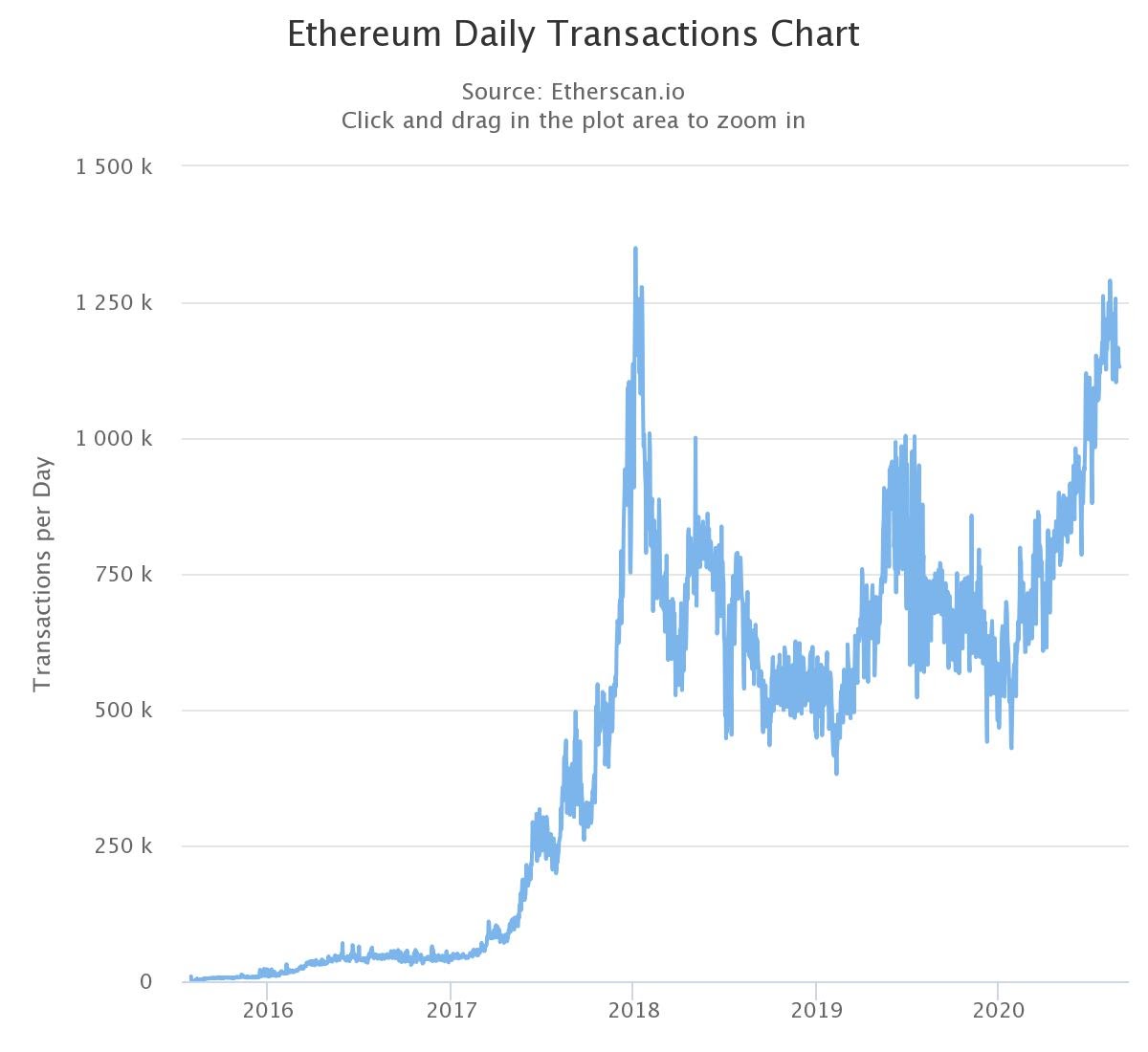 The daily transaction activity on the Ethereum blockchain is nearing 2018 levels for the first time in two years. At the time, ETH surpassed $1,400 on Coinbase, its all-time high price.

Will the DeFi craze be sustained?

The pace of the DeFi market’s growth has increased to a point where it could be more lucrative to “harvest” DeFi coins than to mine. As Clearmatics head of markets Tim Swanson said:

“There are more than 150k txns in the Ethereum mempool and even a ‘slow’ tx fee is around $10. that may sound like a lot of $$$ for miners (it is relative to other time periods) but RoI of capital into harvesting DeFi coins is probably higher, even with impermanent loses.”