One analyst suggests staking may trigger a bull run for ETH, but how likely is ETH 2.0 to generate this amount of demand?

Ethereum 2.0 has dragged its feet. But when it does finally ship, it could provide the “largest economic shift in society” — or so it’s believed. The launch of ETH 2.0 is tentatively penned for July, transforming Ethereum from a no-frills proof-of-work protocol to a fully fledged staking platform. After that, instead of competing against each other to solve puzzles, users who accrue the most wealth, or stake, will be in charge of validating transactions.

It’s this fundamental development that some experts believe could catalyze a bull run for Ether (ETH). Among them is partner at MetaCartel Ventures DAO, Adam Cochran. In the latter half of April, Cochran composed a 50-tweet-long rationale for ETH 2.0 rendering one of the largest “economic shifts” society has ever witnessed.

Putting it simply, the strategist contends that a switch to staking — and the accompanying supply shock it might generate — could engender demand. Are his estimates deemed accurate by others?

As 30% of ETH’s supply locks up, demand will increase — or so the theory goes. But what could generate a supply shock of this magnitude? According to Cochran, ETH supply will dwindle as large investors flood in seeking steady gains. At present, the annualized rate of return for staking ETH is estimated anywhere between 4% and 10%. Fortunately, per the strategist, investors typically seek a minimum 3% to 5% return on investment.

Omri Ross, chief blockchain scientist at eToro, told Cointelegraph that while he remains skeptical about predicting a supply shock for a “speculative asset class,” he submits that, in theory, one is possible:

“Compared to commodities that have real world demand, the changing demand-profile for the asset class, driven by new investors getting into crypto, may drive new demand.”

However, Wilson Withiam, an analyst for Messari research, suggested that latent risks associated with staking such as indefinitely barred assets may turn potential investors away. Similarly, Withiam told Cointelegraph that competition with DeFi could cap the inherent benefits of staking ETH:

“At a certain yield, staking will start to compete with DeFi lending protocols, which could limit the ETH used to set up ETH 2.0 validator accounts. The benefit of DeFi is users would still have access to their funds to exit their position.”

Nick Hill, vice president of business development at Invictus Capital, toes a similar line. Not only did he argue that accumulation won’t happen overnight, but given that staking ETH has been in the pipeline for years, Hill maintained that demand should already be “theoretically” priced in. “Defi is a good indication of this,” he said, adding: “There has not been a substantial increase in ETH price despite the large amount of ETH locked up in DeFi protocols.”

Nevertheless, given a recent uptick in the number of addresses holding 32 ETH — the precise amount required for validators to stake in ETH 2.0 — demand, it seems, is already mounting. According to market intelligence firm Glassnode, there are currently over 116,351 Ethereum addresses containing 32 ETH or more — a figure up over 14% from last year. 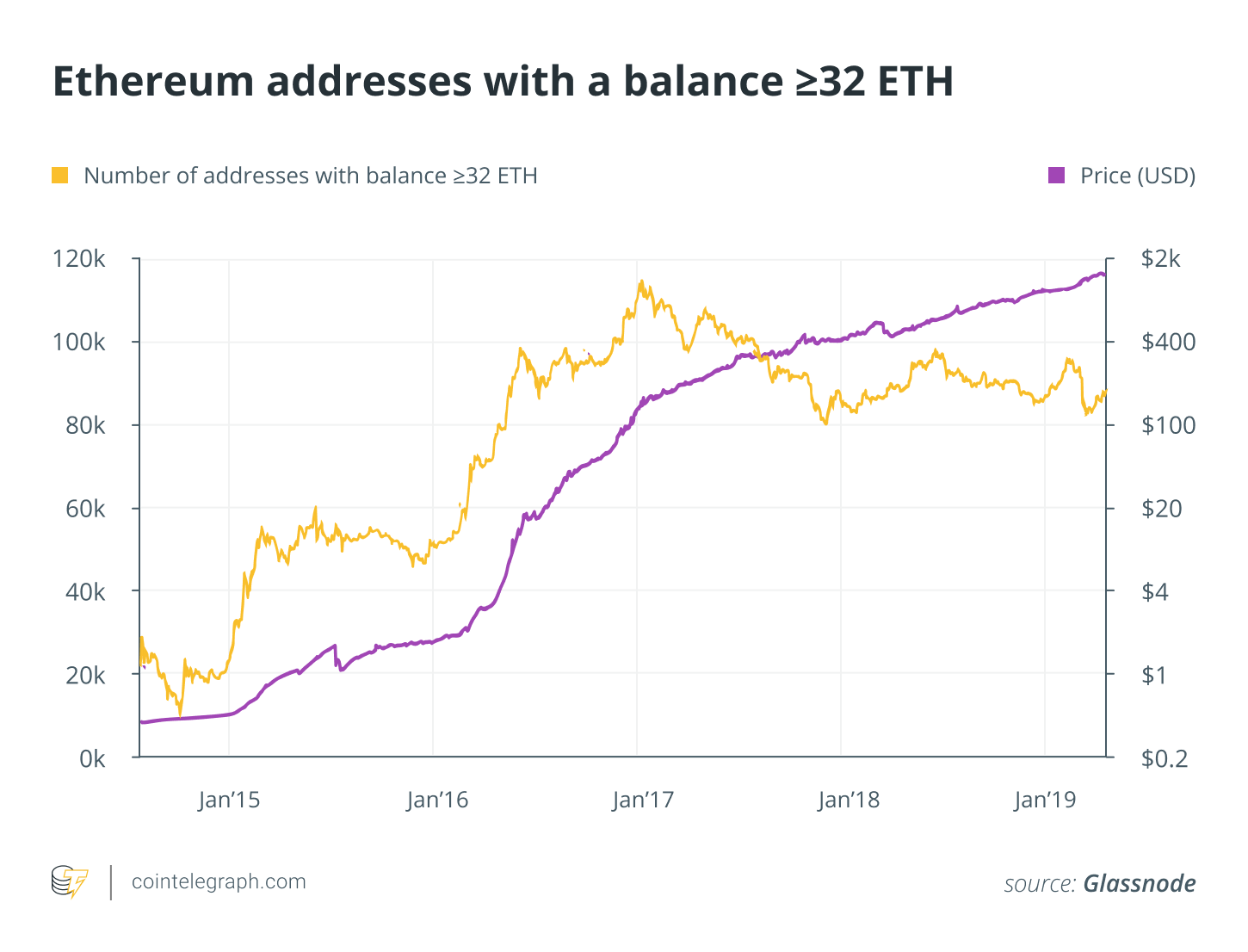 In a recent interview, Ethereum’s founder, Vitalik Buterin, stated that one of the reasons for the upgrade was to reduce issuance. According to Buterin, once ETH 2.0 ships, its theoretical maximum insurance will be capped at 2 million per year — and that's only if everyone participates. At present, the network's annual issuance stands at around 4.7 million. Arguably, a reduction of this magnitude is enough to cause a supply shock all on its own.

Fear of missing out

Next on Cochran’s checklist of bullish catalysts is FOMO, or the fear of missing out. The strategist asserted that a price swell following a supply shock could cause levels of retail FOMO to reach a fever pitch. “When we have both a supply shock and a demand shock taking place in a short time frame this really ignites the FOMO that is going to drive the short-term, all at once price spike,” the analyst shared.

The last time ETH witnessed anything close to the kind of FOMO Cochran alluded to was back in 2017. Following Bitcoin’s parabolic leap to $20,000, altcoins such as ETH rallied — clinging to Bitcoin’s coattails. According to Hill, for FOMO to ensue, the same would need to occur again:

“BTC remains as the headliner for cryptocurrency, and its movements will continue to overshadow those of the altcoins. The flippening is the only potential paradigm shift that would change this dynamic, and given ETH’s fractional size compared to BTC, remains hypothetical for now.”

However, Ankit Bhatia, CEO of the Sapien Network, opined that not only is Ether-specific FOMO feasible, but it may even drive an additional supply cut. “Retail FOMO may follow,” Bhatia told Cointelegraph, adding:

“The retail market would most likely acquire ETH from exchanges like Coinbase, which will probably offer the option for buyers to immediately stake their purchase and further reduce circulating supply.”

Cochran similarly looked back to 2017’s bull run, remarking that FOMO was bottlenecked due to the lack of fiat on-ramps. He argued that with a large number of these gateways now in place, there is little stopping a retail rampage. And he may be right. Most exchanges now offer fiat-to-crypto trades. These aren’t just limited to the U.S. dollar, either. In February Binance added 15 fiat pairs, extending crypto liquidity globally.

While initially discrediting a 2017-esque bull run for ETH, Jeff Garzik, CEO of software firm Bloq, conceded that more fiat on-ramps will undoubtedly aid growth. However, Garzik suggested that due to their inherent link to Ethereum’s DeFi sector, stablecoin on-ramps are the ones to watch:

“DeFi will continue to live primarily on Ethereum for the short term, which helps demand. Stablecoins are part of DeFi and largely live on Ethereum, ergo, a higher number of stablecoin on-ramps will help.”

EIP 1559, an Ethereum improvement proposal, aims to make ETH’s transaction mechanism more efficient. To do so, it requires the BASEFEE to be burned at a rate starting around 10,000 ETH per year. Cochran maintained that this could conjure scarcity — as long as it offsets ET’s annual production.

The assumption is a lofty one. The strategist proposed that as large organizations harness the Ethereum blockchain, the amount burned per year will increase — thus diminishing supply further. But does Cochran’s hypothesis hold up?

“In theory, yes,” said Messari’s Withiam. However, he caveated, users will need to increase significantly. “The proposal should feed into ETH’s claim of a ‘triple-point asset,’ which is valuable in itself. But the burned amount could be negligible for the foreseeable future.” According to Hill, though, expanding usage won’t be an issue for Ethereum:

“This hypothesis assumes the adoption of Ethereum as the global computer. Given the number of the smartest contemporary minds currently focussed on building towards this, it is certainly possible. Further adoption will increase the economic incentive, which will in turn attract further attention from a broadening Ethereum community. This will rely on the resolution of scalability bottlenecks and transaction speed, which will ultimately determine Ethereum’s future.”

Beyond FOMO, lofty expectations of growth and theoretical supply and demand principles, Cochran simply noted genuine interest as a catalyst. With ETH 2.0 providing a solution to the scaling conundrum — among a myriad of other benefits — the strategist proposed that its consumer viability will drastically increase.

He also called upon Metcalfe’s law, a principle that states the value of a telecommunications network is proportional to the square of the number of its users. Still, to drum up users, ETH 2.0 will need to be successful in what it hopes to achieve. Bloq’s Garzik suggested that while usage will develop, it will do so gradually:

“ETH 2.0 is an incremental scaling upgrade, the impact of which will not be felt immediately, because current dApps and current developer workflows are all geared for normal Ethereum (i.e., the first shard). However, it will have longer term impact, that is, giving businesses and developers confidence to build on ETH 2.0 due to higher scalability.”

eToro’s Ross seems to agree with the notion. He suggested that while the gradual rollout may incite periods of uncertainty, mitigating the scalability issues of ETH 1.0 could create a more “sustainable and secure” ecosystem. “This has the potential to lead to more utilisation of the platform and is likely to drive increased demand in the longer term,” he argued.

Of course, the upgrade isn’t without its pitfalls. Chief among them is the perceived threat of centralization. Within proof-of-stake, the wealthiest validators decide the direction of the network. For Pedro Febrero, analyst at Quantum Economics, this poses one of the most significant drawbacks for ETH 2.0:

“There is no way to recoup Eth from stakers. The more Eth you own and stake, the more influence one has, and the more network power is associated with your stake. The issue here is that after a few stakers own over 33% of the entire stake, it's hard — or near impossible — to take that power away from them.”

Withiam likewise offered several reasons why ETH 2.0 may drive users away rather than garner demand. Along with the upgrade’s uncertain and lengthy rollout plan, he suggested that the one-way bridge between ETH 1.0 and ETH 2.0 could be undesirable for some. Moreover, the researcher implied that some Ethereum projects could be wary about the switch — especially the lucrative ones:

“It will be interesting to see if some existing Ethereum projects are wary about transitioning to the new network, particularly DeFi apps that control contracts holding millions of dollars worth of tokens. Emerging scalability solutions (like Optimistic Rollups and ZK Rollups) could decrease the reward of switching networks and cause some projects to question whether to leave ETH 1.0.”

Meanwhile, Hill suggested that too many incentives exist elsewhere for ETH 2.0 to drive material demand. “Annual returns in the region of 3–5% are not outstanding and are certainly not higher than those offered by competitors (e.g. Tezos and Cardano both offer 6%+).”

With all considered, Cochran’s catalysts, though highly speculative, could potentially provide the jumpstart that ETH and its holders have been hoping for. As for generating the largest economic shift in society — calling such a vast prediction may have come too early.