While it is true that humankind put a man on the moon using the computing power equivalent to a modern programmable calculator, there are many great things that still don’t happen because the computational power is scarce and expensive. High-performance computing is still a closely guarded secret weapon of the rich and privileged. Large banks and traders use proprietary algorithms for automated trading, movie makers create impressive special effects, pharmaceutical companies research new drugs and enormous mining farms generate Bitcoin wealth from the thin air. The future seems already to be here, but not for everyone.

And, at the same time, there are millions of computers and servers throughout the world that waste energy and money, idle and underemployed. What if this resource, still untapped, could be pooled and sold to anyone who needs it, so that users won’t have to actually purchase expensive servers or rack up mind-boggling bills on Amazon Web Services or Azure?

This is the idea of iExec Computing Power Marketplace — a sort of Airbnb for computing power that allows anyone, business or individual, to rent out their unused computing resources like a spare room in their apartment. It’s there, anyway, so why not make some money on it?

Based in Lyon, France, iExec aims to make cheap and abundant computing power available to anyone by releasing a marketplace that enables one to trade cloud computing power as a commodity. On this marketplace, anyone can pledge computing power to whatever task that requires it and be rewarded in RLC tokens — their native cryptocurrency — for their contribution. iExec raised about $12 million in their ICO — 10,000 BTC, at the time — in May, 2017. The iExec founders were involved in cloud and distributed computing at various scientific research institutes since 2000.

Delivering on its promises, iExec brought its computing power marketplace online on May 29, during the Blockshow conference in Berlin, when Gilles Fedak — iExec’s founder and CEO — gave a keynote speech and performed a 3D rendering demo.

Technologically, iExec is based on XtremWeb-HEP, a distributed and parallel computing technology that has been around for more than 10 years and have managed, according to iExec, to successfully connect together more than 200,000 computers. It is worth noting that the current iExec CTO, Oleg Lodygensky, was one of the principal developers of this technology.

iExec equipped this long-existing and proven technology with a PoCo (proof-of-contribution) protocol that allows off-chain consensus, makes sure computations are correctly carried out on the network of decentralized nodes, and regulates the flow of rewards between buyers and sellers of computing resources.

iExec builds on the success of volunteer-based grid computing. Grid computing projects like Asteroids@home racked in an impressive performance of some 220 TFLOPS (Trillion Floating Point operations per second) in January 2016, without any kind of incentive for its more than 20,000 participants. A lot involved into computer science remember SETI@Home initiative, they employed the unused computing resources of volunteers’ computers to search for extraterrestrial life.

Volunteer grid computing projects are numerous and quite successful for noncommercial, pro bono causes. To become sufficiently reliable for  commercial applications, a monetary reward should be brought into play.

This is exactly what iExec does — its marketplace makes computing power a tradeable asset, and offers a way to reward those who pledge their spare resources. Obviously, the desire to earn money — without investing anything, giving better usage to corporate and private computers, servers and mining rigs — would entice many more people and businesses to participate.

Lowering the entry barrier to high-performance computing, iExec intends to make it available to small and medium-sized businesses. As explained in the iExec white paper:

“The computing power to run big data applications is most often provided by cloud and High Performance Computing (HPC) infrastructures. However, cloud and HPC infrastructures are complex and expensive. That means that innovative small businesses often don’t have the means and the expertise to acquire and operate HPC platforms, while traditional cloud infrastructure vendors like Amazon AWS are still very expensive for demanding applications (e.g. GPU rendering).”

Apart from rewarding the participants for the computing resources pledged in the marketplace, security questions are also critical for the large-scale business adoption of the technology. iExec have taken various steps to ensure the confidentiality of the code and the data it offers to process on the distributed, untrusted nodes.

While the top-end software encryption standards are something one can expect from this sort of application, iExec is taking one step further — company sources have confirmed to Cointelegraph that the company is actively working on new cloud standards of hardware encryption.

To achieve that, iExec partnered with Intel to support Intel’s SGX technology, that allows maintaining data privacy while performing computing on untrusted nodes that are controlled by third parties. This approach allows new cloud computing paradigms, like processing private data, without risking any leak. The company has already presented a live demo of its SGX implementation.

DApps as an adoption driver

iExec can support compute-intensive applications within a wide range of fields, from artificial intelligence and fintech to scientific research. Nevertheless, to become attractive for current cloud and HPC users, iExec has to actually create a formidable network that can deliver substantial computing power.

In order to achieve this, iExec has decided to focus on blockchain DApps (decentralized applications) as the first step of its adoption strategy.

Reflecting this decision, even the user interface of iExec closely resembles a cryptocurrency exchange in order to make things more familiar for the blockchain users. 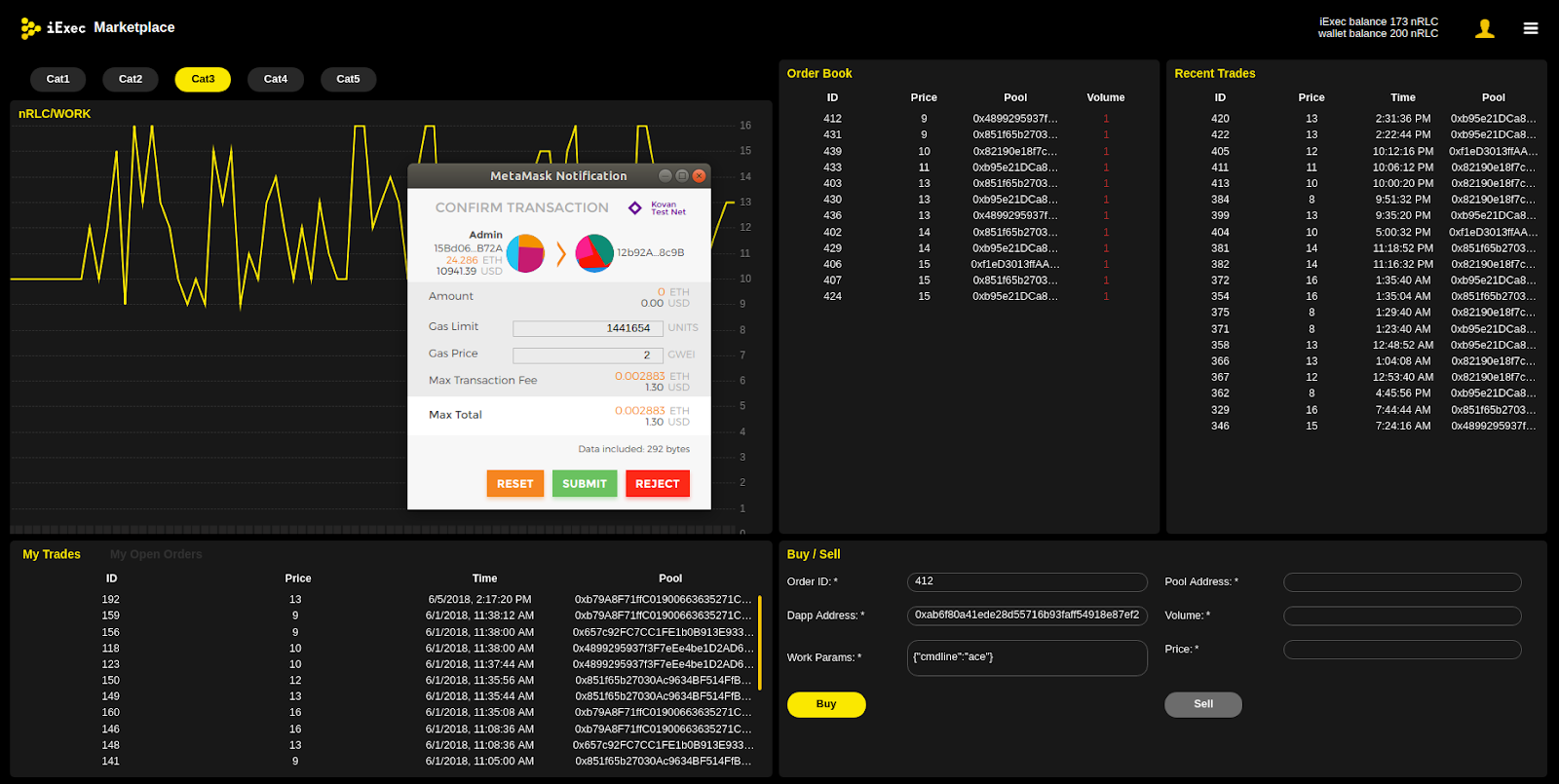 As of now, DApp adoption lags behind traditional mobile and web apps because blockchain apps lack simple, secure and scalable access to powerful off-chain computing resources, as the iExec founders argue. The statement is true: according to State of DApps, the number of daily active users for all DApps combined is less than 10,000 worldwide, and the overall number of DApps hasn’t even reached 2000, as of July, 2018,. Most DApps have less than 100 daily users.

Image source: The State of dApps

“At the moment, the gas mechanism provided by the Ethereum blockchain makes the execution of algorithms with computation and/or memory requirements rapidly costly and performance prohibitive. Thanks to […] iExec, DApps will have a simple, secure, and practical way to reach off-chain computing resources to execute their applications,” the company said in its white paper.

After multi-billion investments in blockchain projects over the last couple of years, the surviving post-ICO projects will require an off-chain computing infrastructure — and iExec’s marketplace is poised to fulfil the demand.

iExec doesn’t lay in wait for the tide of DApps to rise their ship, though. The company also undertakes a range of activities to bolster DApp adoption. One example is the DApp Challenge that iExec has organized, where they financed 15 innovative projects with a grant of $150K. Also, iExec created an app store for DApps — or a DApp Store — that proposes a way for the developers to efficiently monetize their DApps.

iExec’s adoption strategy differs from other contenders like Golem and SONM, which share a similar vision of the future internet infrastructure. “Golem aims at first assembling a network to attract regular 3D rendering users to their platform, SONM is approaching fog and edge computing from the beginning, while iExec first focuses on supporting DApps to build a decentralized cloud that eventually will be competitive enough to attract cloud and HPC users,” states the iExec white paper.

As iExec has reached their hard-cap of 10,000 BTC, the company is now committed to implementing its most extensive and ambitious development plan. In May, 2021, iExec plans to have a fully decentralized blockchain computing platform and build support for emerging fog and edge computing infrastructure.