An introduction to on-chain governance through compiled interviews.

7959 Total views
237 Total shares
Listen to article
0:00
Analysis
Own this piece of history

Since Bitcoin’s introduction in 2009, there have been several attempts to include a decision-making process as part of the rules of a blockchain. This is called on-chain governance, a formalized way in which a group of people can make changes by voting through the protocol.

The purpose behind it is to provide a clear-cut path to consensus. What are some examples of people using on-chain governance? It can include — but is not limited to — the following three topics:

Cointelegraph interviewed several cryptocurrency projects — such as Decred (DCR), Dash (DASH), Bitshares (BTS) and Steemit (STEEM) — to see how they address the various facets of blockchain protocols regarding on-chain governance. 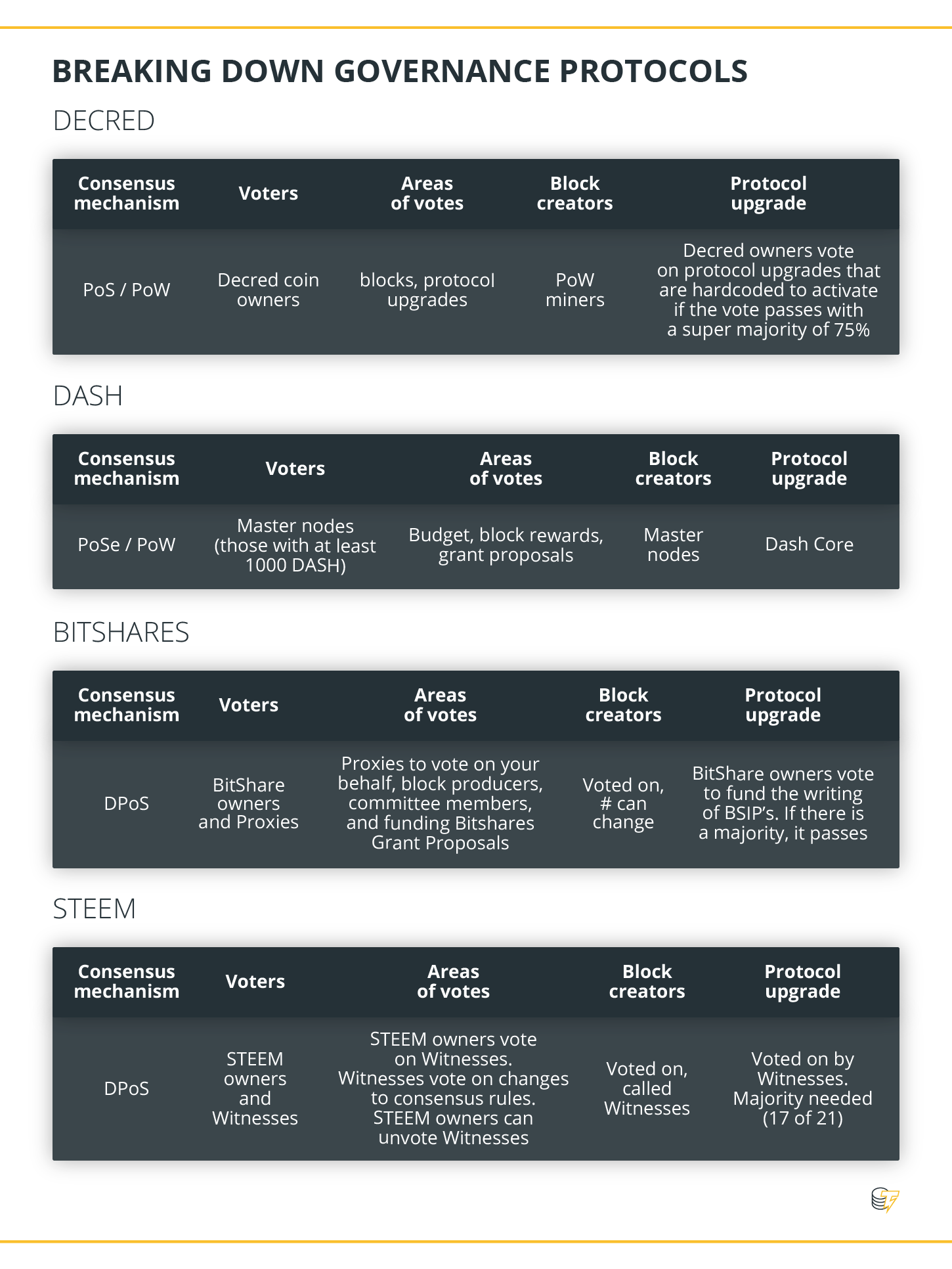 As can be seen from the chart above, three of the four projects use some variation of proof-of-stake (PoS). In this system, rather than people racing to solve a puzzle the fastest, the right to submit a block to the blockchain is deterministically chosen through an algorithm. One factor that can increase the frequency of being chosen is the number of coins a person owns. The more coins they have, the more frequent they will be given the opportunity to submit a block and earn block rewards.

Bitshares and Steem both use a version of this called delegated proof-of-stake (DPoS). In this system, coin owners delegate their votes to others, who then vote on their behalf: called Proxies on Bitshares and Witnesses on Steemit. However, Steem is different from Bitshares in that STEEM owners can only vote for Witnesses. Bitshares, on the other hand, gives the option to vote on Proxies as well as other areas of governance, which will be expanded upon below.

Decred has a hybrid proof-of-stake/proof-of-work (PoW) mechanism. In this system, miners create blocks, but DCR owners vote on which blocks are valid.

Dash also uses what some might consider a hybrid mechanism, except they integrate proof-of-service with proof-of-work for their Master Nodes. In order to become a Master Node, one must own 1,000 DASH. Once this requirement is met, one is then allowed to mine the blockchain through traditional means of proof-of-work.

With on-chain governance, voters exist to help make decisions. All of these projects start with coin owners as voters. But as they move up the hierarchy of governance, the votes get distributed differently.

In Dash, people vote by becoming a Master Node. As a Master Node, they can vote on various budget proposals. The budget to fund these proposals is drawn from 10 percent of DASH’s block rewards.

STEEM owners only get to vote for Witnesses. These Witnesses get to vote on changes in consensus rules. However, STEEM owners also have the option of “unvoting” Witnesses at any time, for any reason — for example, if they don’t agree with the protocol upgrade the Witness chooses to back.

In Bitshares, BTS owners get to vote on several things: block producers, Proxies, committee members who manage a few blockchain parameters and have control over required transaction fees, and funding the development of future BitShares Improvement Protocols (BSIPs).

Finally, DCR owners perhaps have the most power in the governance systems listed above. As Jonathan Zeppettini, international operations lead for Decred, told Cointelegraph:

“Decred is quite different, as we have taken the approach of putting ultimate sovereignty over the network in the hands of the people who actually own the coins.“

However, one interesting fact about Bitshares is that the number of block producers can fluctuate depending on what BTS owners vote for. As Dr.-Ing. Fabian Schuh, a committee member on the BitShares blockchain, noted to Cointelegraph:

“[Block producers] come with a flexible size that is determined by the voters. If a voters prefers 25 block producers over 32, this can be published on-chain.”

Probably one of the most dangerous events a blockchain can go through is a hard fork to change their rules of consensus. Decred provides a unique way to upgrade their network through their governance system. First, the Decred development team hardcodes the changes into the protocol, yet stipulate they only become active once a super majority of 75 percent is met. DCR owners then go through a round of voting. If the 75 percent threshold is met or surpassed, the new protocols are implemented.

In Bitshares, BTS owners vote to fund the writing of BitShare Improvement Protocols (BSIPs). Once there is a majority, the motion passes, funds get released and the proposal gets written and implemented.

“Only Witnesses get to vote on protocol proposals and 17 out of 21 must be met in order for the proposal to go through. But witnesses are elected by anyone with vest STEEM (Steem Power).”

“In general, the system is not used to decide protocol-level rule changes. We feel these technical decisions are best left to experts. Instead, the system may be better described in terms of ‘delegated authority’ in the sense that it primarily authorizes funding for individuals and companies to perform tasks described in each proposal. This stops short of telling the funded entity exactly how to achieve their stated objectives. Dash Core Group, which develops the Dash protocol, produces the reference software for the network, including the protocol changes.”

However, there have been rare occasions where the voting system has been used. For example, in 2016, the network voted to increase the block size limit from 1MB to 2MB. Consensus was achieved, was coded by Dash Core engineers and implemented later, once they determined a safe way to do so.

On-chain governance is not a simple problem to solve and any solution must consider several factors. For example, a blockchain system can’t necessarily rely on people to vote without any incentive. So, how might they properly encourage voting? Or, how can a secure blockchain be ensured with governance that won’t be exploited? In regard to voting, how much power should be given to coin owners? Should they to be delegated? And how much influence in the network should delegates have?

Each of the aforementioned projects tackled these issues in different ways. For example, Decred incentivized voting through 30 percent DCR block rewards. Dash combined voting with mining by creating a high threshold (1,000 DASH) to be met before the becoming a Master Node. Dash’s governance model is also quite removed from protocol upgrades under the philosophy that experts should be the ones to make the decisions. Steem and Bitshares allowed delegation of votes, yet the former restricts it only to delegates while the latter allows voting in other areas.

But perhaps the most fascinating theme between three out of the four projects was the idea of subsidies taken from block rewards and how their on-chain governance was used to distribute these funds. Decred’s subsidies consisted of 10 percent of the block rewards, which DCR owners can vote on how to use. Dash’s subsidies also consist of 10 percent of the block rewards which Master Nodes vote on how to spend. Bitshares has a ‘reserve pool’ of BTS that has yet to be distributed. BTS owners and BTS Proxies draw from this reserve pool when funding BSIPs.